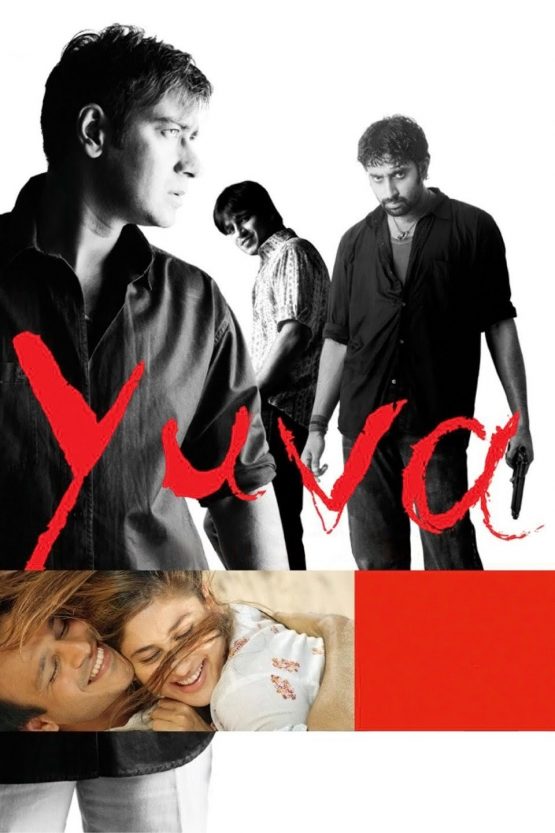 Michael, a student leader, convinces Arjun, the apathetic son of an IAS officer, to join politics. When a powerful politician fails to bribe Michael, he uses his goon Samba to kill them.

Yuva (transl. Youth) is an Indian political thriller film directed by Mani Ratnam and released in 2004. The film was simultaneously shot in Tamil as Aaytha Ezhuthu and in Hindi, and is based on the storyline of students entering politics.

The film tells the stories of three young men from completely different strata of society and how one fateful incident on Kolkata’s Howrah Bridge changes their lives forever. The narrative of the story is partially in hyperlink format.

The film begins with Lallan Singh (Abhishek Bachchan) shooting Michael Mukherjee (Ajay Devgn) on his bike, resulting in him falling off the Howrah Bridge into the water below which is witnessed by Arjun Balachandran (Vivek Oberoi). The flashback of the characters prior to the incident then unveils.

Lallan is a goon, originally from Bihar but settled in Kolkata, West Bengal because his brother Gopal Singh (Sonu Sood) has left him alone and he had no option of earning back home. He loves, marries and abuses his wife, Shashi Biswas (Rani Mukerji). He gets into a contract under Gopal’s recommendation to run errands and work as a hitman for Prosenjit Bhattacharya (Om Puri), a politician.

Michael is an influential student leader who wants politicians like Prosenjit to keep away from college elections. His closest associates are his best friends Vishnu (Karthik Kumar) and Trilok (Abhinav Kashyap). Among the two, Vishnu acts as a partner to Michael. Michael, in his personal life, is in love with his neighbour Radhika (Esha Deol) who lives with her uncle and aunt. Prosenjit is worried when he hears news of students standing in the election. He uses every possible way to get them out of politics. First he provides scholarship of a prestigious foreign university to Michael. When Michael refuses the bribe, he orders his goon Gopal to take control. Gopal orders Lallan to beat up Trilok, which he does; but faces very strong retaliation from Michael and his fellow students.

Arjun Balachandran (Vivek Oberoi) is the carefree and spoiled son of an IAS officer. He wants to relocate to the U.S. for a better future. He falls in love with Meera (Kareena Kapoor), whom he just met. Arjun asks Meera for coffee and takes her to the beach and realizes that Meera loves him back. One day, Arjun proposes to Meera, prompting her to playfully avoid him by getting into a taxi. Arjun gets lift from Michael, who is travelling in the same direction to catch up with Meera, who is going that way. Suddenly, Michael is hit by three bullet (shot by Lallan), and falls off the bridge. He is critically injured but is saved by Arjun and Meera.

Lallan finds out that Michael is recovering from his injuries and this is witnessed by Arjun, who follows him to apprehend him, only for Lallan to beat him up badly and leave him with a broken arm. After staying by his side until his recovery, Arjun changes his mind and joins hands with Michael to contest in elections. Lallan later kills Gopal when he finds out that he had been instructed by Prosenjit to take him out due to Lallan leaving an eyewitness (Arjun) behind the bridge incident. He confronts Prosenjit, who brainwashes him to work for him and orders him to kidnap Arjun, Vishnu and Trilok. However, they escape with the help of Lallan’s ally Dablu (Vijay Raaz), who has a change of heart after realizing that their profession was interfering with their personal lives, causing Sashi to leave Lallan for her hometown. He convinces Lallan, however to no avail and is killed by him when he aids Arjun’s escape.

While running, Arjun calls Michael for help, but Lallan easily catches and beats him up. Michael arrives at the nick of time to rescue Arjun at Vidyasagar Setu. A fight ensues between the three men where Lallan is overpowered by Michael, who spares him and leaves him for the police. Lallan is handed to the police. Michael, Arjun, Vishnu and Trilok win the four seats they had contested for and thus enter into politics.

Ajay Devgn as Michael Mukherjee, an activist who wants to encourage students to enter politics. Character is inspired by George Reddy .
Vivek Oberoi as Arjun Balachandran, a wealthy young man who dreams of going to America.
Abhishek Bachchan as Lallan Singh, a goon working as muscle for politician Prosenjit Bhattacharya.
Esha Deol as Radhika, Michael’s neighbor and also his love interest.
Kareena Kapoor as Meera, a girl who is going to Kanpur and Arjun’s love interest.
Rani Mukerji as Shashi Biswas, Lallan’s wife who gets abused every day by him.
Om Puri as Prosenjit Bhattacharya, a ruthless politician and Lallan’s boss who wants to get the college students out of politics.
Sonu Sood as Gopal Singh, Lallan’s brother, a goon who had left his brother alone and later gets killed by him.
Karthik Kumar as Vishnu, Michael’s close associate who acts as a partner to him.
Abhinav Kashyap as Trilok, Michael’s close associate who once gets beaten up by Lallan Singh.
Vijay Raaz as Dablu, Lallan’s friend who helps Arjun, Vishnu, and Trilok escape.
Saurabh Shukla as Gopal
Anant Nag as IAS Avinash Balachandran, Arjun’s father
Paras Arora as Arun Balachandran, Arjun’s younger brother
Tanusree Chakraborty as Arjun’s classmate
Sujata Sehgal as Michael’s sister
Lekha Washington as the girl at the embassy
Simran as Radhika, Michael’s friend (uncredited)

Be the first to review “Yuva Dvd” Cancel reply