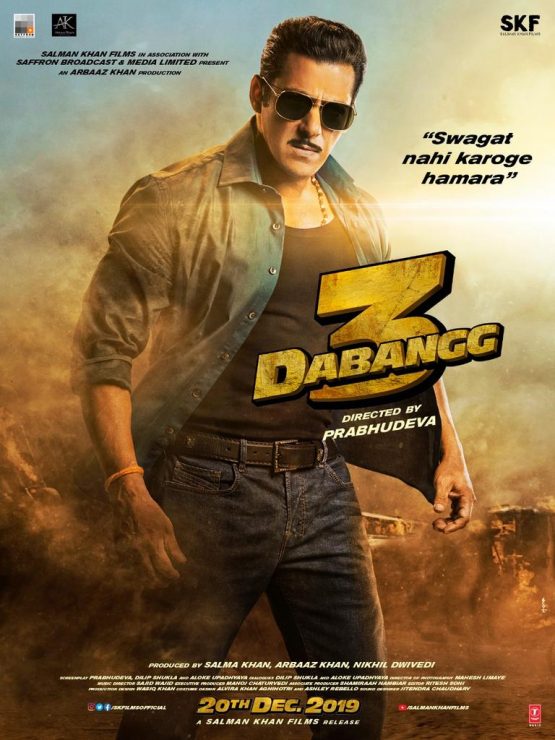 Chulbul Pandey, the playful and fearless inspector, returns once again in a face to face with Balli Singh, a criminal whose antics annoy and who disturbed the lives of many victims.

Set after the events of Dabangg 2, the film showcases Chulbul Pandey’s origin as a police officer, after his encounter with an old rival named Bali Singh refreshes his memory.

Along with dubbed versions in Kannada, Tamil and Telugu languages, the film was theatrically released in India on 20 December 2019. It opened to mixed reviews from critics who praised Khan and Sudeep’s performances while others found it formulaic and weaker as compared to the prequels. At the box office, the film’s collections were further affected by the CAA protests, making it the second lowest-grossing film in the franchise.

Starting off again with a heroic antic, the story moves ahead from Dabangg 2 with the corrupt yet much loved cop, ASP Chulbul Pandey (Salman Khan), preventing a robbery at a wedding, and beating the goons and their leader, Gullu, black and blue. Gullu then agrees to return to his former part-time job as a wedding band trumpeter, and Chulbul is seen dealing with the everyday lives of his wife Rajjo (Sonakshi Sinha), brother Makhanchand “Makkhi” Pandey (Arbaaz Khan), also a police officer, and his son, while his father Prajapati Pandey (Pramod Khanna) stays at home with Rajjo. Makkhi appears to be enjoying a lavish lifestyle most of the times. One fateful day, a despaired girl, probably injured, arrives in a hurry at Makkhi’s station after escaping from somewhere, and seeks help; Makkhi, expecting to punish her captors, who tried to sell her and other girls off, is joined by Chulbul, and after a scuffle, the brothers arrest Chinti Walia (Dolly Bindra), who runs a prostitution racket.

While trying to force a confession out of Chinti at the police station, Chulbul intercepts a lawyer and some goons who have come over to have Chinti released, but he tears off the court order, and in desperation, the leader of the goons keeps his video call going on even as Chulbul smiles into the screen. Minutes later, the leader shows the video call to Bali Singh (Sudeep), who sees Chulbul, who in turns looks back into the phone camera to see Bali. Shocked beyond words, he reminisces his younger days, recalling his fate with Bali.

Years ago, when he was still young, Chulbul, whose real name turns out to be Dhaakad Chand Pandey, fell in love with a girl, Khushi (Saiee Manjrekar), who was initially being considered as a potential bride for Makkhi, after he noticed a photo of her in Makkhi’s hand, and told his mother, Naini Devi (Dimple Kapadia), that he would be a good fit instead of Makkhi; a few days later, Khushi’s maternal uncle Prabhat and maternal aunt Janki (Medha Manjrekar) agreed to the match between Dhaakad and Khushi, and the two began courting each other. At the same time, Bali, a ruthless and violent goon, set his eyes on Khushi and began making arrangements for his marriage with her. However, the moment he saw Dhaakad with Khushi, he decided to kill Khushi and her family right in front of Dhaakad’s eyes after luring him to the spot. Prabhat and Janki were both killed, and Khushi was thrown off a cliff to die. Consequently, both Khushi’s uncle Hariya (Mahesh Manjrekar) and his daughter Rajjo, revealed to be Khushi’s friend, were deeply affected; Hariya took to alcoholism, while Dhaakad, who was framed by Bali and spent much time in prison for the deaths, was taken in by Commissioner Singh (Sharat Saxena) after saving him from attackers, and transformed into an uptight cop, naming himself Chulbul, in Khushi’s memory, forming the events of Dabangg.

At present, Chulbul, having relayed this entire episode to Prajapati and Rajjo, decides that he has had enough, and he needs to close the chapter once and for good. Meanwhile, an ill-attracted Makkhi is misled by Bali into turning against Chulbul, nearly so as to slap him after he too is promoted to the rank of ASP. The action causes him to be banished from home by Prajapati, and he joins hands with Bali actively. Bali, who is set to become a politician and a minister in the upcoming elections, plans to bring in a truck filled with lots of money, and thus gets Makkhi and many other policemen in his circle transferred to one common location in order to facilitate the transportation. Chulbul, however, intercepts the truck and turns Bali’s moles in the police force against Bali himself. As revenge, Bali gets several of Chulbul’s associates kidnapped and brutally beaten to near death, until Chulbul breaks in again and frees them all, even when Bali has run awaywith Makkhi and some reliable accomplices.

Seeking to lure Bali into counterproductive action, Chulbul kidnaps Minister S. S. Sharma and his brother-in-law by staging a ploy with Gullu’s help, and forces a confession out of them, which is made viral. Bali notices the same and Makkhi helps him track them down since he recognizes the hideout. Upon arriving there, Bali kills Sharma and injures his brother-in-law; in retaliation, he sends wrestlers to attack Rajjo and her son, but Chulbul arrives in time to save the two.

Some time later, Chulbul receives a call from Prajapati, who tells him that Rajjo hasn’t arrived home. Sensing Bali’s hand in the matter, he invades a quarry where Bali has held Rajjo, and surprisingly, Makkhi himself, as hostages – Makkhi was always on Chulbul’s side and it was a game by the brothers to incense Bali; after an intense confrontation, Chulbul kills Bali.

Be the first to review “Dabangg 3 Dvd” Cancel reply