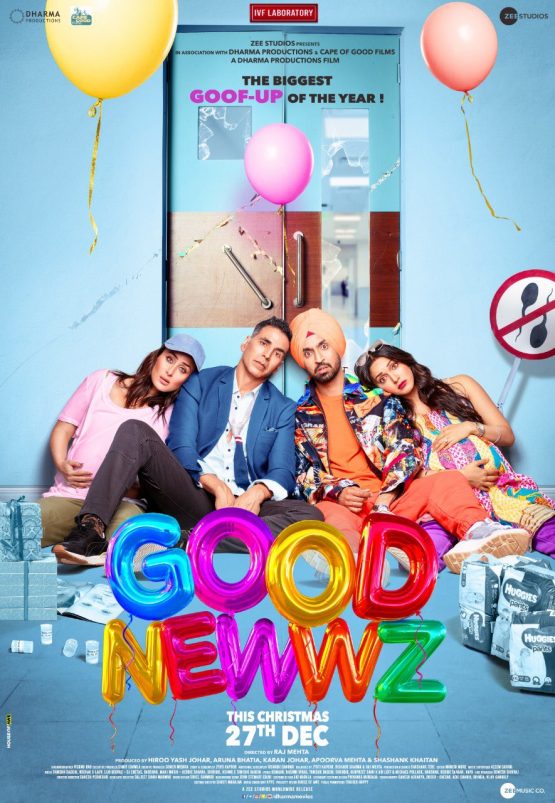 Two married couples are unsuccessful in conceiving and seek medical treatment. However, they land in a complicated situation after a blunder on their doctor’s part.

Good Newwz is a 2019 Indian Hindi-language comedy film directed by Raj Mehta in his directorial debut and produced by Karan Johar, Apoorva Mehta, Hiroo Yash Johar, Shashank Khaitan and Aruna Bhatia under their respective banners Dharma Productions and Cape of Good Films. Starring Akshay Kumar, Kareena Kapoor Khan, Diljit Dosanjh and Kiara Advani in the lead roles, the film revolves around two couples tryst with in vitro fertilisation. The shooting commenced in November 2018 and was completed in April 2019. It was theatrically released in India on 27 December 2019.

Varun Batra is the CEO of a Volkswagen showroom in Mumbai. He and his wife Deepti “Deepu” Batra are a happily married couple going on seven years. However, they struggle to conceive a baby. Varun’s sister Richa suggests the couple meet reputed fertility specialist Anand Joshi, who suggests they do in vitro fertilisation (IVF), a fertility technique that will enhance their chances. They agree, Varun submits sperm samples, and doctor Anand seemingly places Varun’s sperm in Deepu’s embryo.

12 days later, Varun and Deepu are hastily summoned by Anand’s wife, Dr. Sandhya Joshi. Here, Varun and Deepu encounter the other Batra couple, Honey Batra and Monika “Moni” Batra , a couple from Chandigarh, who have taken up IVF as well. Anand guiltily reveals that a sperm mix-up has occurred: Varun’s sperm have been mixed with Moni’s eggs, and Honey’s sperm with Deepu’s eggs. Shocked beyond belief, both couples attack the two doctors. The doctors suggest that the couples go for a minor procedure so there is no chance of pregnancy. Varun later finds out from Honey that Moni is pregnant with Varun’s child, but his rudeness causes Honey to fear the loss of his own child as Deepu has also gotten pregnant. He vows to prevent an abortion on Deepu’s part, and he and Moni rent out an apartment just above Varun’s and Deepu’s, much to the couple’s shock.

Varun and Deepu initially project frustration against Honey and Moni the first six months of pregnancy for interfering in their lives. However, during a routine check-up in the seventh month of pregnancy, Sandhya advises Deepu to try talking to Moni, who is probably going through as much as she is emotionally. Realizing that she needs to try understanding the situation, Deepu asks Moni out for food, during which they start getting to know each other. Deepu learns that Moni had suffered two miscarriages, making her sympathize, and the women bond. However, Varun still nurses a negative attitude, especially since Deepu is not carrying his child. Deepu takes a stand, telling Varun that he has never even tried to understand or care for what she has been going through ever since all of this happened.

Honey and Varun begin bonding at a bar until Honey expresses concern over Deepu’s work commitments, which he thinks will have a negative impact on the child. Varun, incensed, tells Honey to buzz off, and the mood quickly puts an end to the bonding. An argument between the two escalates until Varun storms out and Honey is arrested.

That night, Moni knocks on Deepu’s door in desperation: she has gone into premature labor and Honey is nowhere to be found. Varun hurriedly drives Moni to the hospital and she gives birth. However, the newborn is shifted to a critical unit in grave condition, having been born with a respiratory defect, accelerated by Moni’s history of miscarriages, with little chance of survival. As it hits him that the baby is in fact his, Varun begins crying and hugs Honey when Honey arrives. Varun goes home and breaks down in Deepu’s arms, apologizing for his previous behavior.

For a few weeks, both couples pray for the baby’s recovery and Moni remains in the hospital. The baby finally recovers and Deepu too has a successful delivery. Varun, now a changed man, invites Honey and Moni to meet the baby. Both couples finally bond and accept each other, holding each other’s babies in their arms.

Be the first to review “Good Newwz Dvd” Cancel reply