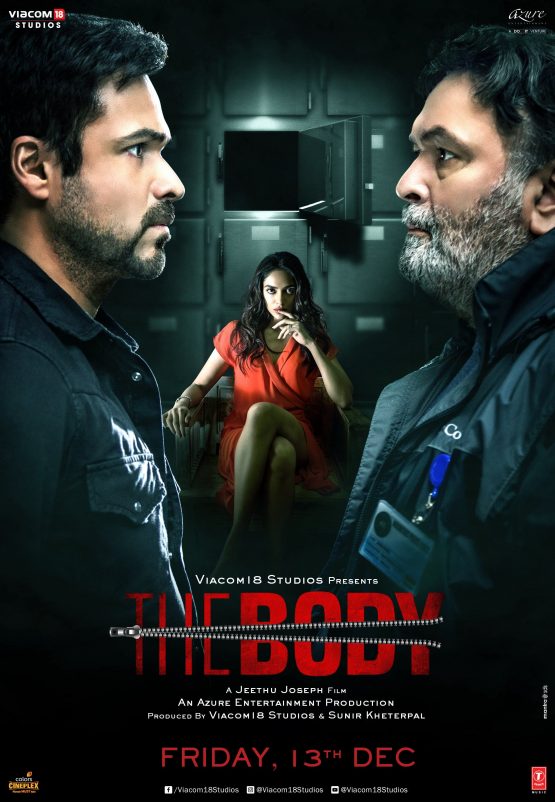 A police inspector is tasked with investigating the disappearance of a powerful businesswoman’s corpse. After questioning her widow, he realises that there is more to the case than meets the eye.

The Body is a 2019 Indian Hindi-language suspense thriller film written and directed by Jeethu Joseph, produced by Viacom18 Motion Pictures and Sunir Kheterpal. The film starring Emraan Hashmi, Rishi Kapoor, Sobhita Dhulipala and Vedhika. It is the official remake of a 2012 Spanish film The Body, which was already remade unofficially as bilingual films in Kannada and Tamil languages as Game in Kannada (Oru Melliya Kodu in Tamil) in 2016.

The film was released on 13 December 2019. This marked the final film appearance of Rishi Kapoor before his death on 30 April 2020

The dead body of a powerful businesswoman named Maya Verma, who died because of having a heart attack, disappeared from the morgue before the autopsy. SP Jairaj Rawal called in her husband, Ajay Puri, for investigation. Ajay Puri who is the owner of a lab and worked under Maya’s company seemed to have committed something wrong along with his girlfriend Ritu.

SP Jairaj suspects Ajay and makes him stay in the morgue until Maya’s corpse is found. Strange incidents start to happen with Ajay. He feels Maya’s presence around him and gradually gets clues including the bottle of cardiotoxin (TH-16) which he had used to induce a heart attack in Maya’s body and also gets a phone in another corpse’s bag having the calls only from Maya. All these events make him believe that Maya is still alive and is playing a game with him to take her revenge.

In a flashback, it is shown that Maya always used to dominate Ajay with her money and power. Ajay’s possessiveness and his affair with Ritu made him kill Maya and made it look like a heart attack by using a cardiotoxin which takes about 8 hours to work. In the morgue, Ajay continuously keeps contact with Ritu and they find out that Maya knew about their relationship by hiring a private detective named Tony d’Costa. Ajay tells Ritu to run away to a safe place as he feels that Maya is after her. When Ajay fails to contact Ritu, he confesses everything to SP Jairaj out of fear and requests him to save Ritu from Maya. In the meantime, SP Jairaj gets a call from his team that they have found a female corpse which is revealed to be Maya’s. When SP orders the police to arrest Ajay, he tries to run away but falls down due to chestpain.

Finally it is revealed that Ritu is none other than SP Jairaj’s daughter Isha. Everything that has happened to Maya and Ajay since the last night was their plan. Yet again in a flashback, it is revealed that SP Jairaj’s wife, Nancy, who died in a car accident was hit by a druken Maya and Ajay and instead of helping them, they return to the crime scene and hit the car again as Ajay had noticed that the little girl sitting on back seat has seen them. After 10 Years, when Isha recognizes Ajay and Maya in her University, she plans a revenge along with her father. Isha attracts Ajay towards her and starts an affair.

At the end, Jairaj discloses to Ajay that he is going to have a heart attack from cardiotoxin, which he had used to kill Maya, which Ritu (Isha) had mixed in his drink 8 hours ago.

Be the first to review “The Body Dvd” Cancel reply