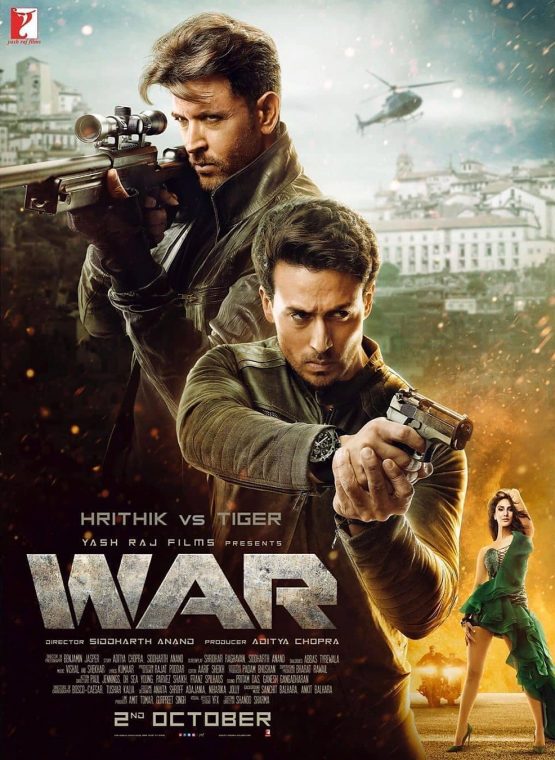 Kabir, a secret agent, goes rogue after a mission to catch a terrorist goes awry. However, his boss sends Khalid, another agent and his student, to track him down.

War is a 2019 Indian Hindi-language action thriller film directed by Siddharth Anand and produced by Aditya Chopra under his banner Yash Raj Films. Starring Hrithik Roshan, Tiger Shroff and Vaani Kapoor, the film follows an Indian soldier assigned to eliminate his former mentor who has gone rogue. Principal photography for the film began in the second week of September 2018 and concluded in March 2019. Initially titled Fighters, the title was changed after the release of the official teaser in July 2019. Its music was composed by Vishal–Shekhar, with lyrics written by Kumaar, and released under the banner YRF Music.

Made on a budget of ₹170 crore, War was released worldwide in conventional, 4DX and MX4D cinemas on 2 October 2019, coinciding with Gandhi Jayanti. Released simultaneously in Tamil and Telugu languages, the film received mostly positive reviews from critics, with praise for the performances of Roshan and Shroff as well as the action sequences, but criticism for the writing. War set the record for the highest-opening day collection made by a Bollywood film in India. With a worldwide gross of over ₹475 crore, the film emerged as a huge box office success, and the highest-grossing Indian film of 2019.

In New Delhi, a mysterious sniper is contacted by an aged secret agent, V.K. Naidu (Mohit Chauhan), to kill a target from a distance. However, the sniper instead shoots Naidu, and escapes. He is revealed to be former Research and Analysis Wing (RAW) agent Kabir (Hrithik Roshan), considered one of the agency’s best who has now gone rogue.

Shortly after, Kabir’s former boss and RAW joint secretary Colonel Sunil Luthra (Ashutosh Rana) relays Kabir’s betrayal to Defence Minister Sherna Patel, who calls for the agency to summon Khalid Rahmani (Tiger Shroff), a RAW agent who was previously mentored by Kabir and is in complete awe of the former agent. A flashback shows Khalid’s introduction to Kabir, who questions Sunil about Khalid’s loyalty to the nation, arguing that Khalid’s late father, Abdul Rahmani, was a traitor to both the nation and to Kabir himself when he shot him. However, in full awe of Kabir, who he regards as a major inspiration, Khalid insists that he will serve his country, no matter what, and regain his family’s honour.

After a successful mission, Kabir takes Khalid to account after noticing that he has a blind spot while aiming a weapon, to which Khalid explains that his father’s reputation resulted in him as a child being injured in the right eye by a school bully, which impaired his vision. Kabir however, eventually accepts Khalid after seeing the love and affection he expresses for his mother Nafeesa, inducting him into his special forces team, which consists of fellow field agents Saurabh (Yash Raj Singh), Prateek and Muthu, and hacker Aditi (Anupriya Goenka). Kabir plans his next mission, which is targeted at criminal mastermind and terrorist-cum-businessman Rizwan Illiyasi. The team captures Illiyasi, but he reveals to Kabir that there is a mole in his team who is fully loyal to his terrorist cause. Killing Prateek and Muthu, Saurabh reveals himself as the mole; blinded by greed he had accepted Illiyasi’s offer of nearly $100 million to betray his country. An enraged Khalid chases after Saurabh, leaving Kabir to deal with Illiyasi alone. Kabir, who nearly succeeds in recapturing Illiyasi, is suddenly shot unconscious by Illiyasi’s henchmen. He wakes up in hospital to find a severely injured Khalid also recovering, who tells him that Saurabh is dead.

In the present, Khalid struggles to find Kabir but fails. He is nearly taken off the mission when another agent is murdered, though he convinces Sunil and Sherna to give him one more chance. He manages to find Kabir and learns his next target is Dr. Utpal Biswas. Khalid realizes that Kabir is actually targeting associates of Illiyasi, which include Biswas and Naidu, and is on an undercover mission to recover a secret code that Illiyasi needs. However, Khalid is unable to prevent Biswas from being killed, and a furious Khalid gives chase to Kabir who escapes again.

Kabir is seen doting on a young girl named Roohi. He reminisces about Roohi’s single mother Naina, who he had started a relationship with in order to make her a perfect civilian asset. Upon learning of his true identity, Naina becomes mistrustful and hesitant to help Kabir but agrees to continue helping him for her daughter’s sake. Naina is sent to spy on Illiyasi’s associate Firoze Contractor. However Kabir, who has been in touch with Aditi, discovers from her that among Illiyasi’s many contacts is a plastic surgeon, Dr. Mallika Singhal, who had previously helped disguise Illiyasi with plastic surgery. Realizing that Contractor is actually Illiyasi, he rushes to Naina’s aid but is too late to save her life.

Khalid traces Kabir through Roohi, and they have a brief discussion at Kabir’s hideout when they are suddenly attacked. Both of them fight off the attackers and make it to Aditi’s wedding in Kerala, whereupon they recover the drive with the secret code that Illiyasi needs. However, after Kabir hands over the drive to Khalid, Khalid poisons him while sharing a drink with him on his boat. A flashback to the chase between Khalid and Saurabh reveals Khalid being shot dead by Illiyasi, following which Saurabh undergoes plastic surgery to disguise himself as Khalid, much like how Illiyasi became Contractor. On the boat, Saurabh throws the poisoned and seemingly helpless Kabir into the river.

Saurabh returns to Illiyasi, who bases himself on a heavily armed icebreaker ship. Illiyasi enters the code, containing the coordinates for an Indian military satellite monitoring the Indo-Pakistani border that supports communications for Indian military forces in remote areas. He launches an anti-satellite missile to destroy the satellite just before Kabir parachutes aboard and single-handedly assaults the ship, eliminating Illyasi’s army. He confronts Saurabh, revealing that he had known that the latter was not Khalid, having seen him aim and shoot in a way which Khalid couldn’t do due to his impaired vision, and also for his choice to drink alcohol, considered forbidden by Khalid. Hence, he put Aditi to spy on him and had also acquired an antidote for the poison in his drink. In addition, he had handed Saurabh the wrong coordinates, which turns the missile around in the air and back towards the ship. Deciding Illiyasi has become expendable, Saurabh shoots him dead in the ensuing confrontation and flees. As the ship explodes from the returned missile, Kabir gives chase to Saurabh and overpowers him after an intense fight in a derelict church. The church’s dome collapses on Saurabh, killing him.

The intelligence agency honors Khalid posthumously for his sacrifice, with Nafeesa receiving an award from the President. Kabir, still believed by the public to be a deserter, spends time with Roohi, and continues with his next undercover mission after a brief conversation with his boss.

Be the first to review “War Dvd” Cancel reply