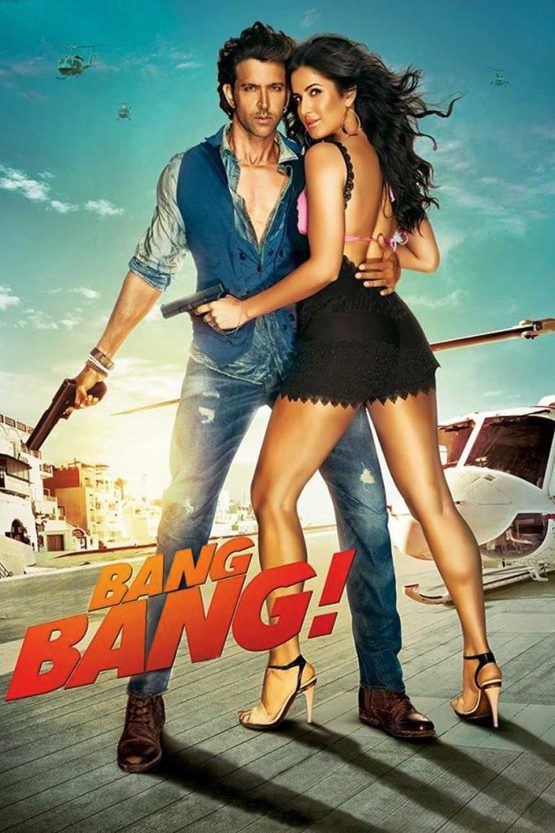 Harleen leads a boring life with her grandmother and works as a bank receptionist. However, her life takes a sudden turn after she falls in love with Rajveer, a thief.

Bang Bang! is a 2014 Indian Hindi-language action thriller film directed by Siddharth Anand and produced by Fox Star Studios, based on an adapted screenplay by Sujoy Ghosh and Suresh Nair. A remake of the 2010 American film Knight and Day by James Mangold starring Tom Cruise and Cameron Diaz, it stars Hrithik Roshan, Katrina Kaif and Danny Denzongpa., while the dialogues in the film are written by Abbas Tyrewala.

Made on a total unprecedented budget of ₹160 crore (US$22 million), Bang Bang! was released in conventional and IMAX theatres on 2 October 2014, coinciding with Gandhi Jayanti. Also released simultaneously in Tamil and Telugu languages, the film was praised for its action sequences and grossed ₹332 crore (US$47 million)–₹340 crore (US$48 million) in its worldwide cinema run.

This section’s plot summary may be too long or excessively detailed. Please help improve it by removing unnecessary details and making it more concise. (May 2020) (Learn how and when to remove this template message)
Somewhere in London, Colonel Viren Nanda (Jimmy Sheirgill) goes to meet a wanted terrorist Omar Zafar (Danny Denzongpa) in his holding cell. As Viren informs Zafar that he will be extradited back to India for his crimes, Zafar’s men enter his holding cell, led by Hamid Gul (Jaaved Jaffrey), killing all guards around them, with Zafar then killing Viren by shooting him and then burning him. As Zafar escapes, he puts a $5 million rewards for someone to steal the Koh-i-Noor diamond from the Tower of London, but with one condition that the thief must be Indian, to hold up a new extradition treaty between India and the UK. Soon after, a man named Rajveer Nanda (Hrithik Roshan) steals it, and when Zafar’s men, led by Shoaib Hakhsar (Ankur Vikal) are informed of the theft, they travel to Rajveer for the deal. Rajveer informs them that he wants $20 million for the deal, then a fight breaks out between them. After Rajveer escapes, he sees a young lady, Harleen Sahni (Katrina Kaif) sitting in a restaurant, who is there waiting for her internet date, “Vickie Kapoor”, to show up. Rajveer enters the restaurant posing as “Vickie” and woos her over. He convinces Harleen to use the bathroom and fights the remaining men who came searching for him. Harleen, upon learning the truth as she comes out, returns in fury, but soon bumps into Rajveer, who reveals his identity, again. When he manages to perform an impromptu surgery on himself with Harleen’s help, he drugs her, telling her that government officials will come looking for her as they have spotted them together, and he dictates Harleen on what she must do when being escorted by them.

The next day, indeed as Rajveer had told her, government agent Zorawar Kalra (Pawan Malhotra) and his informer, Inspector Bhola, visit Harleen at her working bank office and threaten her to come with them. In the car, Zorawar tells her that they are not going to the station but they are taking her to a safe place instead. Taking cues from what Rajveer had instructed her to do, she finds a pistol and holds Bhola at gunpoint. At the same time, Rajveer appears on a bike, and both Rajveer and Harleen find a car and escape. When Rajveer goes out to shoot the goons, Harleen tries to escape from Rajveer when she bumps into her manager, Karan Saxena, who is tracked down by Rajveer is shot by him in the leg when he tries to defend Harleen. Shortly after they escape in Karan’s car, Harleen gets into an argument when she teels Rajveer that she wants to go home and that she had made a huge mistake by trusting him. Rajveer angrily tells her that he has no other motive than protecting her. She feels guilty and decides to stick to him. While Rajveer checks a location on his phone which Harleen notices, he tells her that he has never allowed any innocent person to die at all. During a mid-route halt at a Pizza Hut outlet, Harleen asks him about the crime that he has committed and Rajveer shows her the Koh-i-Noor much to her surprise. Soon they realise that they were followed by Zorawar and his team who convince Harleen to go with them. Rajveer, however, shoots her with a tranquilizer dart and they both jump out of a window and escape. She wakes up at a beach shack wearing a bikini top and shorts. She angrily asks Rajveer as to who changed her clothes and he confesses that he did it. She beats him and then takes Rajveer’s phone to call her grandmother; unbeknownst to her, it allows the government officials to track their position and discover that they are on an island. After a shootout occurs between Rajveer and the government officials on the beach, he escapes with Harleen with help from a sea bob and a fly board.

Harleen wakes up the next morning in Prague. As Rajveer was able to successfully lead the escape of them both, Harleen now entrusts Rajveer, subsequently falling in love with him. When Rajveer goes out of his hotel with Harleen, he tracks Gul at a casino, visits him atop the terrace, and a fight ensues regarding the whereabouts of Zafar, wherein Rajveer ultimately kills Gul. In the meantime, Harleen spots Zorawar and is taken to the Indian Embassy in Prague, where Zorawar and Indian Intelligence Secret Services Chief Narayanan (Vikram Gokhale) reveal to her that Rajveer actually came to Prague to find Gul, and Zorawar gives her a tracking device. Harleen is asked to get the Koh-i-Noor back. That night, Rajveer picks up Harleen at the entrance of a hotel where she says while walking on a bridge that the trust between them is broken, and that she knows about him. Rajveer activates the tracking device himself, allowing the officials to surround them. Rajveer gives the Koh-i-Noor to Harleen and jumps from the bridge, but is shot, and is assumed dead.

Harleen then returns home and found that she is missing Rajveer. She then remembers the address location that Rajveer was viewing on his phone. At the address, she meets Rajveer’s father Pankaj (Kanwaljit Singh) and his mother Shikha (Deepti Naval). At the house, Harleen sees photos of Rajveer, when Shikha reveals that her sons Viren and Jaiwant “Jai” Nanda, the latter disguised as Rajveer, had been serving in the army. She goes on to explain that although it was confirmed that Viren was murdered, she almost claims that Jai died while on a mission when he drowned deep after being shot fatally, when Pankaj rises and negates the story the army told him, as he goes on to point Harleen to a trophy, explaining that the trophy was won by Jai, a swimming champion in his youth, as he was the only student who was able to cross the lake in only one breath. On her way home, Harleen is kidnapped by someone and next lands up in a fortress, where she meets Zafar, who learns and reveals that the diamond was a fake. Zorawar is then revealed to be Zafar’s right-hand man, and gives Harleen a truth serum drug to reveal the location of the real diamond. Harleen, realizing that her intuitions about him are correct, deduces that Rajveer has survived and is coming to kill Zafar.

In the meantime, it is shown that Rajveer has survived, and he then silently kills every guard posted outside and places time bombs in every corner and enters the room. Zafar then orders his men to beat Rajveer, but before Zafar is able to kill him, Rajveer informs that the Koh-i-Noor was not stolen at all and it was a joint operation between the MI6 and the Indian Secret Service to get Zafar. The time bombs go off and destroy the castle, but Zafar manages to escape and captures Harleen again. As they escape with her in flight,Rajveer get into that flight and kills all of them on board then frees Harleen, while destroying the flight and throwing Zafar into the fire after a brief struggle. When they are escaping from the aircraft, Zafar emerges again and shoots Rajveer. Jaiwant pushes Harleen out of the aircraft and grabs the axe and charges towards Zafar and kills him. When the aircraft is about to explode, he jumps out, loses consciousness, and is about to drown when Harleen grabs his hand, and the authorities airlift them both.

Jaiwant then wakes up in hospital, where Narayanan, now revealed to be his commandant, is sitting across him and congratulates him for successfully completing the mission. He rues about the fact that Viren was murdered and that their parents will never get to see him again. Also, he informs Rajveer that Harleen has been sent back to her home and he will be shifted to a safe facility the next day. After Narayanan leaves, a nurse arrives and gives Jaiwant a medicine to drink. He feels giddy and asks the nurse about it. The nurse turns around and removes her mask revealing that she is actually Harleen and the medicine was a sedative meant to knock Jaiwant out. Jaiwant faints and Harleen escapes from the hospital along with him. He wakes up and realises that she has brought him to his house. He silently thanks her, and they both reunite with Pankaj and Shikha.

Be the first to review “Bang Bang Dvd” Cancel reply