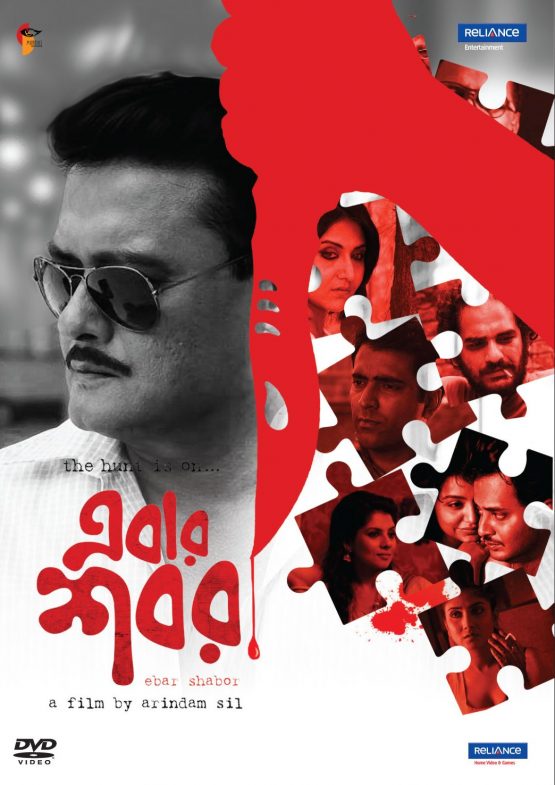 A very much experienced police detective Mr. Shabor Dasgupta (Actor-Saswata Chatterjee) is assigned to do the task of solving the mystery of the murder of Mitali Ghosh (Actress-Swastika Mukherjee),who is a woman with a messy past life, who was killed on the night she had thrown a house party for her close friends and family. The task is very tough for Shabor to find the real victim. There are lots of twists in the story.

Ebar Shabor (Bengali: এবার শবর) (English:Now It’s the hunter) is a 2015 Indian Bengali-language mystery-thriller film
based on the detective story “Rin” (ঋণ) by Shirshendu Mukhopadhyay.The film is directed by Tollywood line producer
Arindam Sil, and produced by Reliance Entertainment and Mundus Services. This is the first installment of Goenda Shabor
film series. This is the second directorial venture of the master film director after the blockbuster Aborto
The film is based on the investigation of the murder of Mitali Ghosh (Swastika Mukherjee). What follows is a revelation
of certain shameful truths that are prevalent in the life of a typical high society person. The film released on 2 January 2015.

A police detective Shabor Dasgupta (Saswata Chatterjee) is entrusted with the daunting task of solving the mystery surrounding the murder of Mitali Ghosh (Swastika Mukherjee), a woman with a messy past, who was killed on the night she had thrown a party for friends and family. The task is daunting for Shabor because of the number of people involved. Mitali was once married to Mithu Mitra (Abir Chatterjee), whom she divorced before settling overseas. Though she soon realized how much she loved him, her ego kept her from coming back to him. Heartbroken, Mithu found love in Mitali’s cousin Joyeeta (Payel Sarkar). Also involved was Mitali’s childhood friend and secret admirer Samiran (Rahul Banerjee), who has relationships with several women, including a school’s physical education teacher, Julekha Sharma (June Malia), and another girl, Khonika (Debolina Dutta). Shabor starts investigation with his assistant Nandalal. As Shabor probes deeper, he learns many disturbing secrets about the Ghosh family, including the fact that Mitali had once eloped with a boy from her locality Pantu Haldar (Ritwick Chakraborty). She had married and left him within six months, ruining his future in the process. He was arrested and beaten black and blue by the police who were paid by Mitali’s father for the same. Such savage beating resulted in severe nerve damage and erectile dysfunction in Pantu. His career, too, was ruined. Another character, Doel, also comes into the picture. The detective now has to deal with the complex relationship problems that run deep root in the family and the mystery gets more and more complicated. After her father’s death, Mitali comes back to Kolkata and stays with Joyeeta’s family. Later, Joyeeta reveals that she’s dating Mithu. Mitali is heartbroken, and tries to lure Mithu by joining their accounts in vain. In the party, Samiran flirts with Mitali and calls her attractive before a much disgusted Konika. Mitali had confided into Kanika about Mithu and Joyeeta’s affair. Meanwhile, when Mitali was in Pondicherry, her father got into a sexual relationship with Julekha and a son was born to them. Julekha was a poor nurse and she started to blackmail him into marrying her but in vain. She even told Mitali about their relation to get a share into his property after his death but was kicked out as a fraud. In that evening before the party, Julekha sneaked in the house with the help of family servant Haren da to steal some money. Unable to provide for her son, Julekha was forced into prostitution, targeting men to earn from. On one such hunts, she came across Pantu; who paid her but could not please her owing to his erectile dysfunction. She insulted him very roughly for that. All the events of the past and Mitali’s role in ruining his life flogged Pantu’s mind, and a frustrated Pantu thus went and stabbed Mitali six times, saying three were from him and three from Mithu.

Be the first to review “Ebar Shabor Dvd” Cancel reply