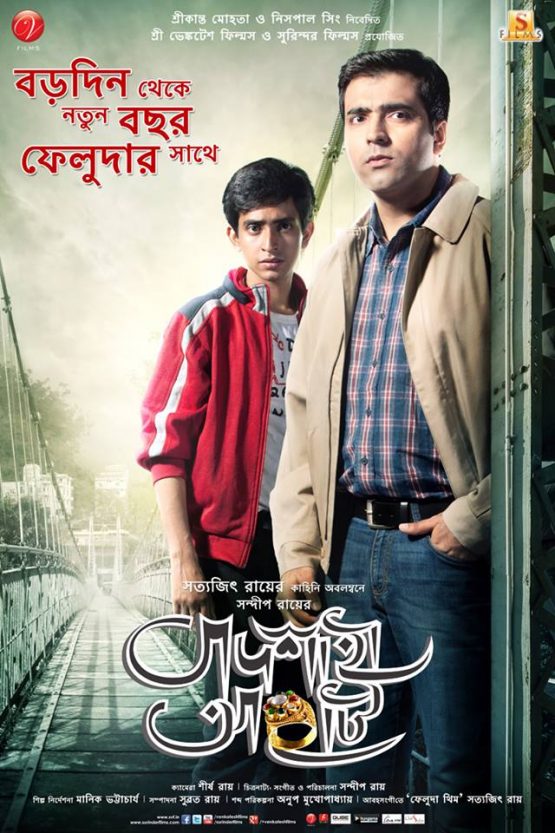 A well-known detective must catch a thief who seems to be trying to steal the ring of the long-dead Mughal emperor Aurangzeb.

Badshahi Angti (Bengali: বাদশাহী আংটি, The Emperor’s Ring) is a 2014 Bengali thriller film directed by Sandip Ray,
based on the novel of the same name by Satyajit Ray, starring Abir Chatterjee and Sourav Das as Feluda and Topse respectively.
The film was released on 19 December 2014. It is the first film which stars Abir Chatterjee as Feluda.

Feluda (Abir Chatterjee) and his cousin Topshe (Sourav Das) visit Lucknow with Topshe’s father (Deepankar De) to spend the Puja vacation. They arrive at the house of Dhirendra Kumar Sanyal (Biswajit Chakraborty), a friend of Topshe’s father. That evening Dr. Shrivastav (Bharat Kaul) also comes to Dhirendra Kumar Sanyal and tells him that last night, a thief tried to steal his ‘Ring of Aurangzeb’ (The Emperor’s Ring) which was given to him by Pyarilaal Seth. After the incident Dr. Shrivastav is afraid and asks Dhirendra Kumar Sanyal to keep the ring safe. Sanyal agrees and keeps the ring at his home. But one day the ring goes missing from there. Then Feluda and Topshe start investigating, to find the culprit. Meanwhile, Feluda meets an interesting person in the neighbourhood, Mr. Bonobihari Sarkar (Paran Bandyopadhyay). Bonobihari babu has ferocious and poisonous creatures like crocodile, African tiger, hyena, rattlesnake, scorpion and black widow spider in his home. Feluda also meets Mahabir (Tathagata Mukherjee), late Pyarilal’s son and a film actor who believes foul play is behind his father’s death. They travel to Lakshman Jhula Temple, Haridwar. Here, when Feluda lights his cigar near the banks of Ganga, Topse gets a glance of a shining object in Feluda’s matchbox. He think that it may be the Emperor’s Ring (Badshahi Angti). Later that night he asks Feluda about it when Feluda agrees that it was the ring. Next day when they move on to Lakshman Jhula the whole group gets divided into two and Feluda and Topse accompany Bonobiharibabu. The driver of their car was a servant of Bonobiharibabu, Ganesh Guho (Rajatava Dutta) in Punjabi disguise. They trap Feluda and Topshe in a log house 1.5 miles from Lakshman Jhula. Their whole story is revealed by Feluda and it is also proved that Bonobihari babu is the culprit and also the murderer of Pyarilaal Seth. The film ends when Topshe regains his consciousness after the last scene climax and glances over Feluda wearing the Badshahi Angti.

Be the first to review “Badshahi Angti Dvd” Cancel reply