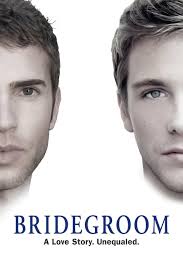 After his beloved partner, Tom, dies from injuries suffered in a fall, Shane Bitney Crone is barred from the funeral by Tom’s family.

Bridegroom (full title: Bridegroom: A Love Story, Unequaled) is a 2013 American documentary film about the relationship between two young gay men, produced and directed by Linda Bloodworth-Thomason. Bridegroom premiered at the 2013 Tribeca Film Festival on April 23, 2013, and attracted further press coverage because its premiere screening at the festival was introduced by former President Bill Clinton.

Bridegroom chronicles the story of Shane Bitney Crone and his partner Thomas Lee “Tom” Bridegroom, who died in 2011 following an accidental fall from the rooftop of a four-story apartment building in Los Angeles. After Bridegroom’s death, Crone found himself cut off and deprived of any legal protection. The film tells the story of their 6-year-long relationship, and the struggles Crone faced after Bridegroom’s death, including the family not allowing Crone to attend the funeral of his life partner.

Be the first to review “Bridegroom Dvd” Cancel reply