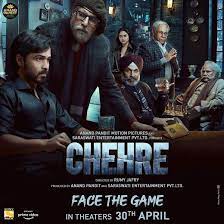 Chehre (transl. Faces) is a 2021 Indian Hindi-language mystery thriller film directed by Rumy Jafry with production by Anand Pandit Motion Pictures and Saraswati Entertainment Private Limited starring Amitabh Bachchan and Emraan Hashmi as leads. The film featuring Krystle D’Souza, Rhea Chakraborty, Siddhanth Kapoor, Annu Kapoor, Alexx O’Nell, Dhritiman Chatterjee and Raghubir Yadav in other pivotal roles sees Bachchan playing a lawyer, while Hashmi a business tycoon. The film is an uncredited adaptation of the 1956 German novel A Dangerous Game by Friedrich Dürrenmatt which had earlier been adapted in Marathi as Shantata! Court Chaalu Aahe (1971) in Kannada as Male Nilluvavarege (2015) and in Bengali as Anusandhan (2021).

An 80-year-old man with a penchant for a real life game with his group of friends conduct a mock trial and decide if justice has been served, if not they make sure justice is served.

An ad agency executive (Emraan Hashmi) takes shelter at an old man’s home in the mountains amid a dangerous snow storm, but soon finds himself trapped with no way out when the man and his clan of veterans hook him for a game of crime and punishment.

Be the first to review “Chehre dvd” Cancel reply