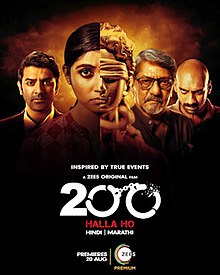 200 Halla Ho is a 2021 Indian Hindi-language crime thriller film directed by Sarthak Dasgupta and Alok Batra (in his directorial debut) with production by Yoodlee films. The film is based on the real life incident in which 200 Dalit women lynched Akku Yadav, a gangster, robber, serial rapist, and killer in an open court in Nagpur in 2004. It was digitally released on 20 August 2021 on ZEE5.

Plot
Akku Yadav is a mobster, who gang rapes, murders, robs and terrorizes 300 families without any fear of law, for a period of 15 years. He takes special interest in using the rape threat to break and humiliate the Dalit community. He allegedly rapes over 40 women and children, gets arrested 14 times but is never sentenced, therefore he has no fear of law and randomly picks up any woman he fancies – irrespective of their age. The police refuse to help the Dalits and go on to sell out the complainants to Akku. His reign of terror continues till he meets his nemesis in a young and educated Dalit girl – Usha Narayane. She files a FIR against Akku, and when cornered by him and his gang, threatens to burn them down. This inspires the villagers to revolt against Akku and file 40 FIRs, however when all their hopes of getting justice vanish, the women of the basti decide to take matters into their own hands and make a fitting example out of Akku.

Be the first to review “200 Halla Ho dvd” Cancel reply