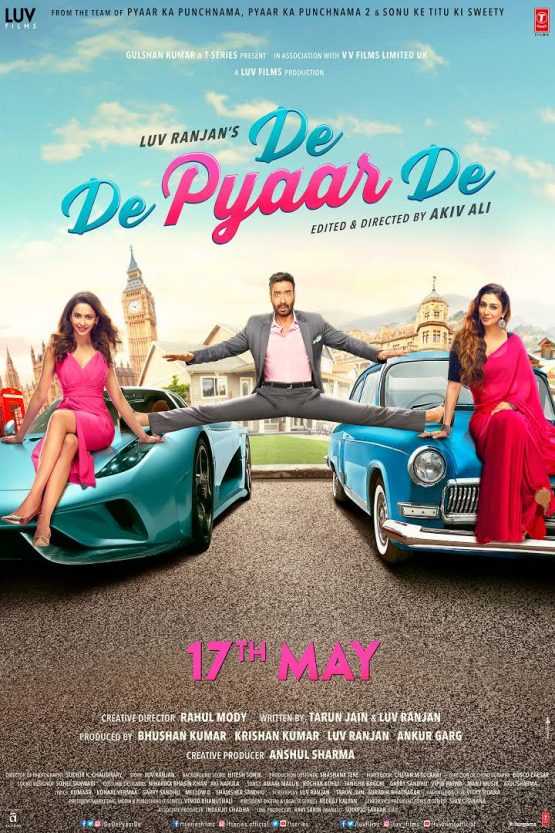 When Ashish falls in love with Ayesha, a woman almost half his age, he introduces her to his ex-wife and children. However, their unacceptance threatens to ruin their relationship.

De De Pyaar De (transl. Give me my love) is a 2019 Indian Hindi-language romantic comedy film written by Luv Ranjan and directed by Akiv Ali in his directorial debut. It was produced by Bhushan Kumar, Krishan Kumar, Luv Ranjan and Ankur Garg under their respective banners T-Series and Luv Films. It stars Ajay Devgn, Tabu and Rakul Preet Singh. The film follows Ashish, a middle-aged non-resident Indian divorcé; he decides to marry Ayesha, a young woman who is almost half his age. Chaos occurs when Ayesha is introduced to his family, including his ex-wife and children.

De De Pyaar De was scheduled to release on 15 March 2019, but was delayed to avoid competition with Devgn’s Total Dhamaal, which was to release in that time period. It was theatrically released in India on 17 May 2019. The film received generally mixed reviews; while critics praised the performances of Devgn and Tabu, its misogynistic ideals attracted criticism. The film grossed over ₹1.43 billion (US$20 million) worldwide against a production budget of ₹780 million (US$11 million) to emerge as a commercial success.

Ashish Mehra (Ajay Devgn) is a 50-year-old non-resident Indian businessman settled in London. He meets Ayesha Khurana (Rakul Preet Singh), a 26-year-old who poses as a stripper at his friend’s bachelorette. They start dating and begin a serious relationship, living together. Ashish’s friend and psychologist Samir Khanna (Javed Jaffrey) is skeptical about Ayesha at first but is convinced. Ashish informs her that he is separated from his wife Manju Rao (Tabu) and his children live in India. Their relationship suffers a setback when Ashish reveals that he is too old to have children, but they reconcile and he decides to introduce Ayesha to his family.

Ashish takes Ayesha to his parents’ residence in Manali to gain their approval for marriage. There, he sees that his family, composed of his ex-wife Manju, daughter Ishita, and son Ishaan, now live with his father Veerendra (Alok Nath) and mother Suman. Ishita is irritated by his arrival as she believes that he will ruin her family’s meeting with Atul Saxena (Kumud Mishra), her to-be-father-in-law. A startled Ashish introduces Ayesha as his secretary, much to the latter’s chagrin. There is more chaos and confusion that is covered with lies, and Ashish is introduced as Manju’s brother to Ishita’s future in-laws.

Ayesha and Manju fail to get along well. Ishita is angered when she sees Ashish and Ayesha together and shouts at him. Ashish reveals to the family that he had brought Ayesha to gain their approval and Ishita also reveals to Atul that Ashish is her father. Ishita’s marriage is called off and Ashish is blamed for it, but Manju defends him. That night, Ashish and Manju sleep together after Manju breaks down and Ashish consoles her. The next morning, when this is revealed to Ayesha, she feels cheated and shouts on Manju, saying will she react the same if he cheated on her with some other woman, to which Manju responds by revealing that she is still his wife and Ayesha is the other woman. Heartbroken, a dejected Ayesha returns to London. Meanwhile, Ashish convinces Atul for the marriage, and despite arrangements going in full swing, he begins to miss Ayesha.

Manju travels to London and convinces Ayesha to give Ashish another chance, telling her that the divorce papers are ready. Ayesha reconciles with Ashish. In a mid-credits scene, Ayesha and Ashish argue on whether they should meet Ayesha’s family.