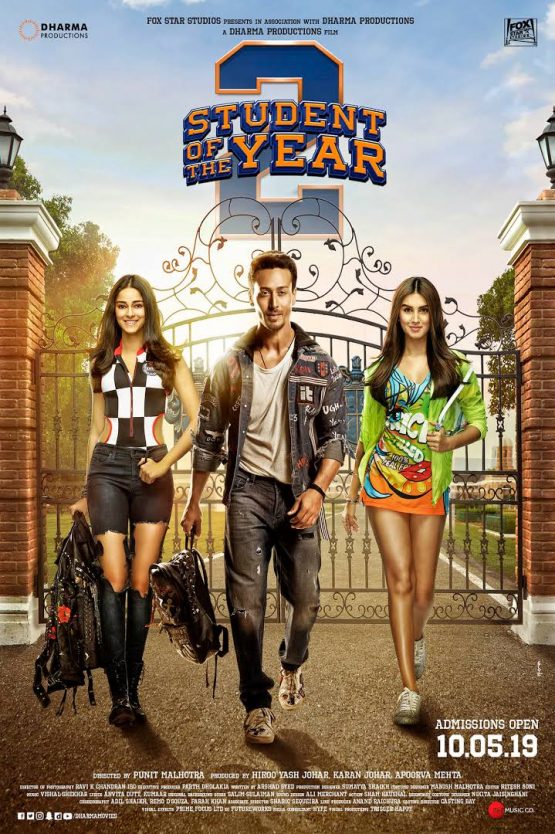 Student of the Year 2 Dvd

Student of the Year 2 is a 2019 Indian Hindi-language teen romantic drama film written by Arshad Sayed and directed by Punit Malhotra. It was produced by Karan Johar, Hiroo Yash Johar and Apoorva Mehta under the banner Dharma Productions, and was distributed by Fox Star Studios. A sequel to the 2012 film Student of the Year, it stars Tiger Shroff, Tara Sutaria, and Ananya Panday, alongside Aditya Seal and Harsh Beniwal in the supporting roles. The film follows Rohan Sachdev, a college student in a quest to become Student of the Year. It was heavily panned by critics and audience alike and it holds a rating of 7% on Rotten tomatoes.[4]

Student of the Year 2 was announced in October 2017. Initially, Malhotra and Shroff were to collaborate for a different film; when they found the final script unsatisfactory, they tweaked it and planned to make it a sequel. It marks the debut of both Sutaria and Panday and pursues a plot that is unrelated to its predecessor. Principal photography for the film began in April 2018 at Dehradun, and ended in September 2018. The film’s soundtrack was composed by Vishal-Shekhar, with lyrics written by Anvita Dutt Guptan, Kumaar and Vayu, and released under the banner Zee Music Company.

Student of the Year 2 was theatrically released in India on 10 May 2019. The film received generally negative reviews from critics, with the script, unreal situation, and unrealistic depiction of Indian schools thus receiving criticism; Shroff’s action sequences were praised. As of 7 June 2019, it has earned ₹98.16 crore worldwide, against a budget of ₹70 crore, including promotion and advertising costs.

Rohan Sachdev (Tiger Shroff), a middle-class student at Pishorilal Chamandas College, decides to go to St. Teresa’s High School, a college for the affluent and talented, after his childhood sweetheart, Mridula Chawla, transfers there. He gets a scholarship in the college. Mridula, now going by Mia (Tara Sutaria), initially avoids Rohan in a desperate attempt to become popular, but the two begin a relationship when Rohan wins the college over by showing his sports skills.

Rohan becomes friends with Manav Singh Randhawa (Aditya Seal), a popular, affluent, student and reigning Student of the Year. However, he is at odds with Manav’s sister Shreya (Ananya Panday), who detests and often plays pranks on him. She tricks his Pishorilal friends into showing up at Manav’s birthday party, where they are insulted, causing a rift between them and Rohan. After one of her pranks gets her in trouble with her father, Sukesh (Chetan Pandit), Rohan tries to make peace with Shreya, but she refuses.

Rohan-Mia and Manav-Shreya are coupled up in an upcoming dance competition where Mia wants to win in order to gain popularity whilst Shreya wants to fulfill her dream of enrolling at a dance academy in London. Manav and Shreya win the contest after Mia falters during a step. When Rohan goes to console Mia, he instead finds her getting intimate with Manav, and realizes that Manav, knowing Mia had a crush on Manav, had planted Mia to spoil Rohan’s performance since he saw him as a threat to his image. Rohan is expelled from St. Teresa’s after punching Manav, and is subsequently beaten up by Manav’s friends before being thrown out. Initially dejected and struggling to deal with what he sees as Mia’s betrayal, Rohan eventually fights back and challenges Manav saying he, not Manav, will be winning the Student of the Year trophy.

Rohan returns back to Pishorilal, where his old friends treat him with contempt. Shreya, who is impressed by Rohan’s sincerity, reveals to his friends that she set them up, and also convinces Rohan to join her in a national dance competition, hoping she can study at dance school in London. The two become friends as they practice and win the dance competition. Shreya reveals her mother died upon her birth, causing her father to believe she was cursed and detested her. Mia tries to win back Rohan after leaving Manav when he cheats on her. Shreya, though, reveals that she’s also in love with Rohan, which results in a heated argument between Mia and Shreya over Rohan, culminating in Shreya spilling coffee over Mia in a fit of anger and Rohan asking Shreya to leave. Though Shreya thinks Rohan will go back to Mia, he comes to her house the following day and defends Shreya to Sukesh, revealing their dance victory.

During the Dignity Cup opening ceremony, a fight breaks out between Pishorilal and St. Teresa’s, when Rohan’s friends tease Manav and his team, ending in Rohan’s teammate and rival Abhishek, being seriously injured. However, when Rohan beats up Manav to defend Abhishek, they make amends and the team decides to work together to win the Dignity Cup, training hard. When she goes to meet Abhishek in the hospital, seeing her Mia holds Rohan’s hand showing Rohan patched up with her. There Shreya apologizes to Mia. When Mia asks her about her love for Rohan she tells it to be a schoolgirl crush and to be happy. Then she leaves. Rohan leaves Mia’s hand and follows Shreya asking her if she is fine. She thanks him and reveals she will leave for London for graduating from the London School of Dance at the end of the term. At this juncture, Rohan professes his love for her, but she refuses and goes. However, Mia realizes that she has lost Rohan for good.

Pishorilal, usually last, manages to climb up the ranks and gets to the final against St. Teresa’s. On the night of the second-day event, Mia expresses her happiness and tries to kiss him but he turns his face and tells him he doesn’t want to patch up with her and saying that it’s time he focused on his own dreams and not let her be his only goal. Although upset, she accepts his decision and supports Rohan in his fight. The two part as friends. The next day, before the final, Rohan confesses his love for Shreya for a second time and she accepts after he tells that Mia is just his friend and she is his present and future, and the two unite. During the Kabaddi match, Manav engages in foul play against Pishorilal, but Rohan helps the team fight back, and win the Dignity Cup, defeating St. Teresa. Rohan and Shreya embrace, which Mia sees but she leaves smiling knowing Rohan dreams has come true. Pishorilal celebrates their first-ever victory and Rohan becomes Student of the Year, fulfilling his dreams.