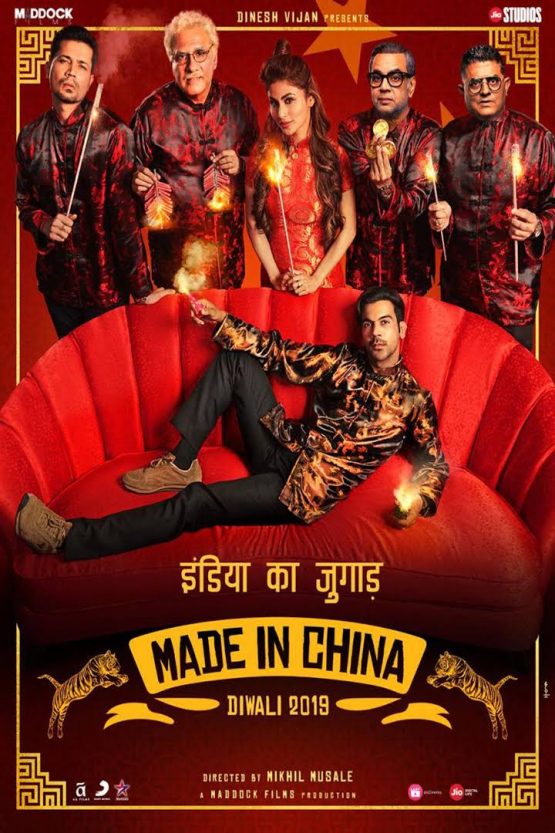 Raghuvir, an aspiring entrepreneur, is unsuccessful in every business venture he attempts. Faced with no other option, he decides to travel to China for new opportunities.

Made in China is a 2019 Indian Hindi-language comedy film directed by Mikhil Musale.Produced by Dinesh Vijan under Maddock Films, the film stars Rajkummar Rao, Mouni Roy, Boman Irani, and explores the story of a Gujarati businessman, played by Rao, who goes to China to increase his business prospects. The film is based on the novel of the same name by Parinda Joshi.

Principal photography began in September 2018 and concluded in May 2019. Initially planned to be released in August 2019. The film was theatrically released in India on 25 October 2019, on the occasion of Diwali.

Wiki letter w.svg
This article needs an improved plot summary. Please edit this article to provide one. (November 2019) (November 2019)
During a cultural event in Gujarat, a Chinese delegate, General Zeng consumes a product called Tiger Soup and dies. The investigation into his death point towards the Tiger Soup as a possible cause of death and its manufacturer, Raghuvir “Raghu” Mehta who surrenders himself to the authorities.

Over a flashback, it is shown that Raghu has been a failed Gujarati entrepreneur who lives with his wife Rukmini and his son Chintu. He struggles to come up with a profitable business idea and have cycled through several products which have failed to take off. His uncle forces him to go on a trip to China with his cousin Devraj where he is to meet investors about a sports drink business. In China, Devraj presents his product to Tanmay, a successful Gujrati entrepreneur, who rejects it. Despondent Devraj abandons Raghu to his own devices. He strikes up a bond with Tanmay who explains that customer’s needs are akin to a lock and Raghu must find the key to that lock in order to be a successful businessman. Raghu goes on a drunken binge with Devraj’s contact Xui Lee and in stupor, commits to meet her boss Hao Li while posing as Devraj.

During the meeting, Hao introduces Raghu to Tiger Penis Soup which is the Chinese equivalent of Viagra. Hao proposes that Raghu shall sell this product in India and suggests that it will be successful over there because Chinese and Indians are constantly thinking about sex. While researching the market in India, Raghu realizes that there is no genuine solution available for sexual problems faced by men. Raghu proposes a business partnership to Dr. Tribhuvan Vardhi, a sexologist whose book have impressed Raghu, but Vardhi initially rejects the offer. Meanwhile, Raghu’s inability to provide a steady income for his family creates tension between him and Rukmini. Raghu proceeds to recruit Vardhi with the promise of spreading sex awareness to the public and eventually Vardhi agrees. Back in the present, General Zeng’s autopsy is held up in diplomatic red tape, forcing the investigators into trying to get to the truth through Raghu.

Rewinding to the past, Raghu puts together a team of talented young professionals to handle manufacturing and distribution of the product. After some initial struggles, Raghu meets Tanmay who suggests Vardhi as the face of their product. The team arranges a seminar but Vardhi accidentally walks into a parent-teacher conference; his impassioned plea to make sexual discourse normal in society goes viral. As a result, the Tiger Soup business is wildly successful. However, Raghu hides the product from Rukmini and his extended family who think that he is running a business related to Chinese fans. Devraj soon finds out that the Tiger Soup is behind the success of Raghu. Raghu meets with Abhay Chopra, a successful investor and motivational speaker, who is in league with Devraj. Chopra proposes a business partnership but Raghu rejects the proposal. In retaliation, Devraj reveals to the family that Raghu is running the ostensibly disreputable Tiger Soup business.

Chintu is expelled from his school when a bottle of Tiger Soup is found in his bag. When Rukmini finds out that Raghu lied about his business, she confronts him about it. A distressed Raghu goes to Vardhi to end their partnership but a timely call from Tanmay causes him to reconsider. Back to the present, Raghu and Vardhi appear before a preliminary commission consisting of several government agencies to explain their role in Zeng’s death. Raghu reveals that there is no secret ingredient in the soup, it is just Rabdi, an Indian dessert, and implies that most sexual issues are more psychological than biological. Dr. Vardhi appeals to the commission not to consider sex as a taboo topic and encourages them to let the product continue instead of banning it. However, while bureaucratic pressures from the Chinese delegation force the commission to ban the Tiger Soup for some time, Raghu and Vardhi are acquitted and convey to the media that they are happy that the product was not banned completely.

At the end, Raghu is shown as a successful owner of a chain of sexual health-related clinics with Dr. Vardhi as the face of the business and he is invited to a premier business school to give a lecture on being an entrepreneur. Rukmini is overwhelmed at the success of her husband and the achievements he has made. Raghu ends with the catchphrase “Customer …..” .

Be the first to review “Made in China Dvd” Cancel reply