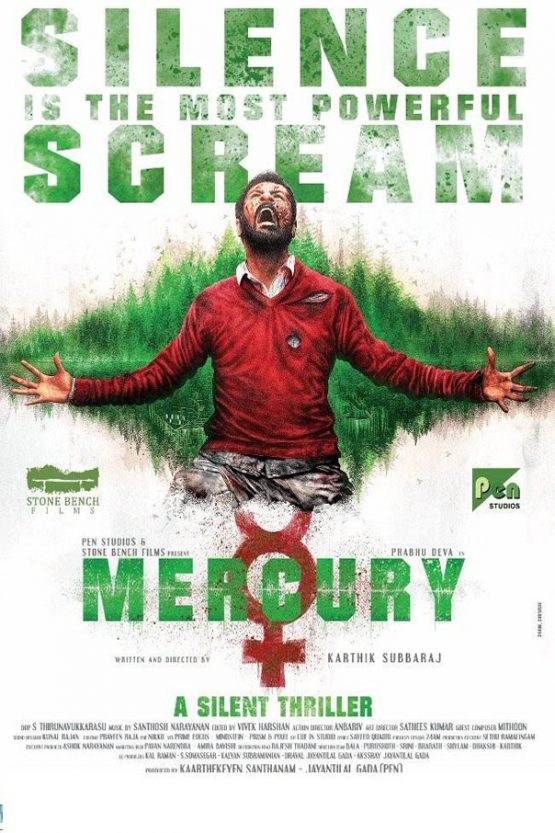 Five friends accidentally kill a man whose vision is impaired. Tension further rises when the man’s ghost starts terrorising them in mysterious ways.

Mercury is a 2018 Indian horror thriller film written and directed by Karthik Subbaraj. Though it is referred to by the makers as a “silent film”, it is actually a sound film which lacks dialogues. It stars an ensemble cast including Prabhu Deva, Sananth Reddy, Remya Nambeesan, Indhuja Ravichandran, Deepak Paramesh, Shashank Purushotham, Anish Padmanabhan, and Gajaraj. S. Tirru was hired as the cinematographer, making his first collaboration with Subbaraj. The trailer of the movie released on 10 April 2018. The film was released on 13 April 2018 worldwide except Tamil Nadu, where it was released on 20 April 2018.

Maimed from mercury poisoning, five longtime friends come together for a high school reunion on a farm. Then, Michael (Sananth Reddy) plans to propose to Meera (Indhuja Ravichandran) and calls her and his friends and they go on a night drive at a place Michael proposes Meera and Meera accepts. Afterwards, while driving the other four friends home, Meera ends up running into a dog after the other four were messing with the headlights. Because of this, her vision was impaired. Somehow, the friends accidentally end up dragging a blind man (Prabhu Deva) to death. After dumping his body, the friends are terrorized by the man’s ghost in mysterious ways.

Be the first to review “Mercury Dvd” Cancel reply