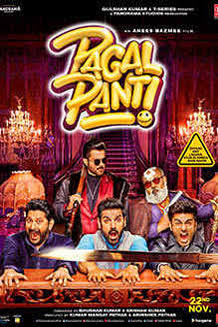 Three men, perceived as losers by society, wish to earn quick money and get rich. They, along with their respective girlfriends, hatch a plan to con two gangsters and steal their money.

Pagalpanti (transl. Madness) is a 2019 Indian Hindi-language action comedy film directed by Anees Bazmee and produced by Bhushan Kumar and Krishan Kumar under the banner of T-Series along with Kumar Mangat Pathak and Abhishek Pathak under the banner of Panorama Studios. The film stars an ensemble cast of Anil Kapoor, John Abraham, Ileana D’Cruz, Arshad Warsi, Urvashi Rautela, Pulkit Samrat, Kriti Kharbanda and Saurabh Shukla in the lead roles.

Principal photography of the film commenced on 17 February 2019 in London. It was theatrically released in India on 22 November 2019. It received generally unfavorable reviews from critics who mainly criticized the writing.

Raj Kishore is plagued by bad luck which also follows his longtime friends Junky and Chandu. Any venture the trio engage in results in losses or setbacks; even their fire-cracker shop burns down on its inaugural day. The trio fool Sanjana by making her fall in love with Raj and into getting them a bank loan to start a new package delivery business but her uncle, having similarly been fooled by them before, catches wind of them and demands their money back. The trio escape and inadvertently end up making their first delivery: a highly expensive sports car for Jhanvi, daughter of Raja Saahab and niece of WiFi Bhai. They deliver the car in a destroyed condition for which they are tortured by Raja Saahab and his goons. They offer their services as servants, a suggestion which WiFi accepts; he convinces Raja Saahab to hire them against their astrologer’s wishes who is aware of Raj Kishore’s bad luck. They get employed as disposable servants; Junky and Chandu are used for testing food that Raja Saahab’s and WiFi’s enemies may have poisoned while Raj Kishore is used as their decoy while traveling. In the process, Chandu and Jhanvi fall for each other.

During one of their traveling assignments, old enemies Bulli and Tulli Seth attack their convoy where it is revealed that WiFi is actually a coward. Fed up of their constant rivalry, businessman-turned-don Niraj Modi who absconded India after taking huge loans proposes to end their conflict by offering each party ₹700 crores to invest. By their continued stroke of bad luck, Raj Kishore, Junky and Chandu end up causing a fire that burns the whole stack of money. In a bid to save what’s left of their money, Raja Saahab and WiFi send the trio to bet on their lucky horse. They instead overhear a conversation about another horse and bet on it which instead loses the race. Unable to pay Raja and WiFi, the trio escape with Jhanvi and Sanjana and her uncle following them. The group ends up on a glue truck where Jhanvi’s lips get stuck to Chandu’s cheeks and Sanjana and her uncle get stuck on their backs. They arrive in an abandoned house where they meet Kavya who has been staying there posing as a ghost after facing rejection in her acting career. There, Raj accidentally discovers a basement where Niraj Modi keeps his stockpiles of cash. The trio steal the money and arrive at Raja Saahab’s and WiFi’s house just when they are about to be executed by Modi for not paying them. They settle the money and buy out Niraj Modi’s properties.

Eventually, Modi discovers that the trio pulled a fast one on him by stealing his own money to buy his properties. He arrives at Raja Saahab’s house and threatens to kill them all. Raj Kishore reminds him that his money is not really his own but stolen from India and Raj Kishore himself is an ex-employee of one of the banks Modi took loans from and thus was one of many people who lost jobs because of Modi. Raj also goads Modi’s henchmen into keeping the money for themselves. A skirmish ensues involving two escaped lions and concludes with detectives arriving to take Modi into custody. Raj, Junky and Chandu reconcile their differences with Raja Saahab and WiFi.

Be the first to review “Pagalpanti Dvd” Cancel reply