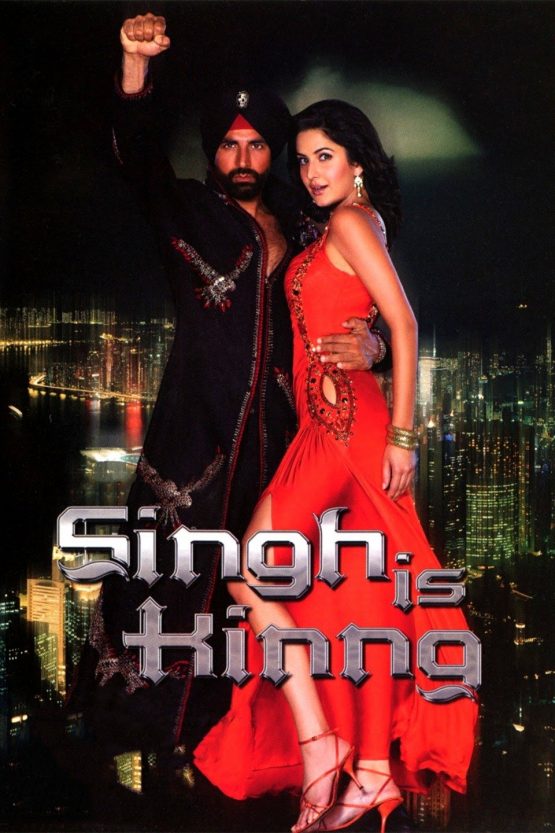 Happy, notoriously famous for his antics, is sent to fetch Lakhan so that he can meet his ailing father. But, in Australia, Happy ends up taking Lakhan’s place as the king of the local underworld.

Singh Is Kinng is a 2008 Indian action comedy film directed by Anees Bazmee, which stars Akshay Kumar and Katrina Kaif in lead roles. The film also featured a music video with Snoop Dogg. The film was released on 8 August 2008, and a major part of the production was shot in Australia. Akshay Kumar was also nominated for the Asian Film Awards in the “Best Actor” category for his performance in the film. Singh Is Kinng was declared a Superhit by Box Office India. The spelling of the word “king” in the film’s title with an additional letter “n” was based on advice provided by a numerologist. The film was the third highest-grossing Bollywood film of 2008. It grossed over ₹124 crore at the box office against a budget of ₹450 million. This one is unrelated to the 2015 film Singh Is Bliing, which also starred Akshay Kumar and was rumored to be the sequel to Singh Is Kinng. Singh Is Kinng is an unofficial remake of Jackie Chan’s Miracles, which was inspired by Frank Capra’s Lady for a Day and Pocketful of Miracles.

Lakhan Singh (Sonu Sood), a.k.a. Lucky, is the king of the Australian underworld. He is accompanied by his Sikh mafia associates, Julie (Neha Dhupia), Mika (Jaaved Jaffrey), Pankaj Udaas (Yashpal Sharma), Raftaar (Sudhanshu Pandey), Dilbaugh Singh (Manoj Pahwa) and Guruji Gurbaksh Singh (Kamal Chopra). In a small village in Punjab, the birthplace of Lucky, there lives another Sikh, Happy Singh (Akshay Kumar). Happy, though good at heart, has unintentionally caused many problems in the village, and the villagers are fed up with him. They decide to send Happy on a long trip to Australia with his friend Rangeela (Om Puri) to bring Lucky back to Punjab, which will keep Happy out of the village for some time and bring peace to the village.

But at the airport, Happy’s and Rangeela’s tickets to Australia are accidentally exchanged with those of Puneet (Ranvir Shorey), who was to fly to Egypt. In Egypt, Happy meets Sonia (Katrina Kaif) and falls deeply in love with her. But he does not express his love to her. Leaving her behind, he heads to Australia to meet Lucky. Lucky refuses to return to his hometown and throws Happy and Rangeela out of his house. Penniless, Happy finds warmth and affection in an elderly lady (Kirron Kher) who provides him with food in spite of being a stranger.

Lucky winds up in hospital, paralyzed, after a series of violent incidents that Happy has caused. (In one of these incidents, his head is bumped severely, and the trauma from the resultant concussion is what paralyzes him.) Unexpectedly, it is Happy who is given the position of the “Kinng.” The lady who helped Happy is obviously worried and depressed, as her daughter is returning from Egypt with her wealthy boyfriend, Puneet. The daughter does not know that after the death of her father years ago, her mother had become poverty-stricken and been reduced to work as a flower seller. Happy gives her Lucky’s spacious house and makes all his mafia associates work for her.

The lady’s daughter arrives; to Happy’s horror, she is none other than Sonia. Heartbroken, Happy is forced to make a show of happiness to Sonia. Puneet says that he too would have had a good time with Happy and Sonia in Egypt had his ticket to Egypt not been exchanged in the airport, because of which he had ended up in Australia. Puneet had always been jealous of Sonia being with Happy; however, he doubts something is going on between them.

Meanwhile, Lucky’s gang members spend enough time with the kindhearted Kinng for most of them to be reformed and give up lawless lives in favour of law-abiding ones.

In spite of herself, Sonia falls in love with Happy and the truth becomes difficult to hide. Puneet sets his heart to marry Sonia. Sonia gets trapped in an emotional tug-of-war between Puneet, who loves her, and Happy, whom she loves.

In the confusion, Happy’s associates reveal to Puneet who they are, and that Happy is the Kinng of the Australian underworld, not a manager as Puneet had believed him to be. Puneet, in turn, reveals this to Sonia, who has become aware of her own poverty.

On the dawn of the wedding day, the sound of gunshots firing can be heard. Happy takes Sonia in order to save her—and unknowingly, both run around the fire seven times, essentially getting married. (During all this, Lucky’s head is bumped, and the trauma-induced paralysis he had suffered from is relieved.) Suddenly, Mika turns up on the spot, ready to kill Happy, armed with a gang and his new special glasses and hearing aid. As he is about to shoot, Lucky steps up and stops him. Then a dialogue ensues between Mika, Happy, Lucky, and the associates of the Kinng. Then Happy tells him that being the “kinng” is not as great as it may seem and explains him the characteristics of a true Sikh. Lucky confesses that he had always found being Kinng a source of misery, because a true kinng fights for others, not for himself. Overcome with remorse, Mika drops his gun. The movie ends with Happy’s and Sonia’s marriage and the returns of Lucky and his gang members to their homes in the village.

Be the first to review “Singh Is Kinng Dvd” Cancel reply