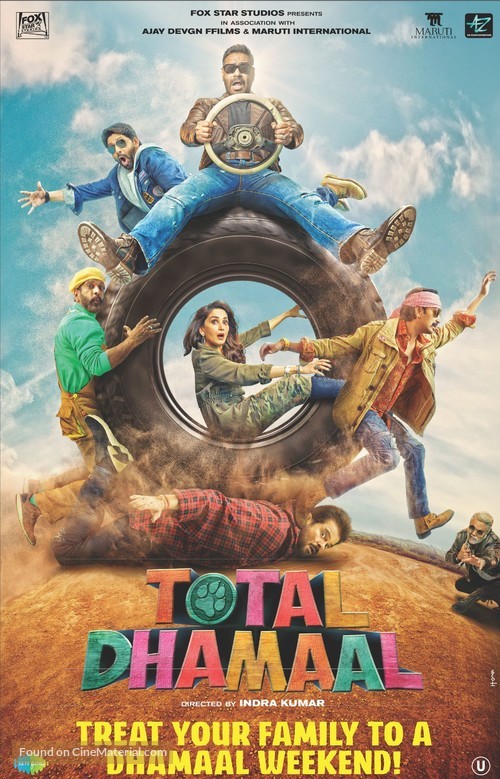 When a plane carrying a thief’s treasure crashes in Janakpur, a group of eccentric people and seasoned con artists compete against each other to find it first.

Total Dhamaal (also known as Dhamaal 3) is an Indian 2019 Hindi-language adventure comedy film directed, co-produced and written by Indra Kumar. The third installment of the Dhamaal franchise, it is a reboot of the 2007 film Dhamaal, and based loosely on the 1963 Hollywood film It’s a Mad, Mad, Mad, Mad World, with some scenes borrowed from 2015 film Vacation. Total Dhamaal features a large ensemble cast including Ajay Devgn, Anil Kapoor, Madhuri Dixit, Riteish Deshmukh, Arshad Warsi, Javed Jaffrey, Sanjay Mishra, Pitobash Tripathy and Boman Irani with Johnny Lever and Manoj Pahwa in supporting roles and Sonakshi Sinha in a special appearance in the song “Mungda”.

Production of the film began in March 2017. Deshmukh, Warsi and Jaffrey were chosen to be a part of Total Dhamaal too. Meanwhile, Devgn, Kapoor and Dixit were added to the cast as well. Principal photography of Total Dhamaal began in January 2018. Devgn also co-produced the film. Filming concluded in August 2018. The official teaser of the film was released on 19 January 2019 following which the trailer was launched on 21 January. Due to the Pulwama Attack held on 14 February, the film was not released in Pakistan.

Guddu (Ajay Devgan) and his partner Johnny (Sanjay Mishra) plan and steal ₹500 million of black money from a Police Commissioner (Boman Irani). When they try to escape, Pintoo (Manoj Pahwa), their associate, double-crosses the both and drives away with the money.

Avinash and Bindu are troubled couples who are filing a divorce and argue over keeping their child. Lallan and Jhingur are partners who are working in a fire brigade service where they try to bribe people and earn more money which leads to them being fired after causing a mishap while rescuing people from a house in fire. Adi and Manav find a job at an art gallery where they accidentally destroy the whole gallery and escape with the owner’s advanced remote-controlled car. Meanwhile, Pintoo plans to leave the country but Guddu and Johney catch up to him. While running from them, Pintoo gets onto a private plane to escape but learns that instead of the pilot, he brought the janitor with him. The janitor escapes with the only parachute and the plane crashes. Coincidentally everyone arrives at the site of the crash where Pintoo reveals that the money is kept in the Janakpur Zoo by him and asks them to look under an OK. After learning about the money, everyone decides to grab the money for themselves. Guddu and Johnny’s car breaks down and they wait on the road to find another car. Avinash drives the car into the forest while claiming he knows a shortcut. Lallan takes him and Jhingur to a nearby helicopter service. Adi and Manav use the stolen car to reach Janakpur. Guddu and Johnny find an advanced car with a sarcastic G.P.S system which leads them to wrong routes and ultimately leads the car down a steep slope and destroys the car. Avinash and Bindu get lost in the forest and meet a local villager who claims to know the route to highway. They both take him with them. Lallan and Jhingur arrive at the helicopter service where they travel on a old and broken helicopter of the owner which is on the verge of crashing. Adi crashes the car in a desert after getting distracted by an attractive woman and gets stuck in quicksand. Manav takes a snake and asks Adi to grab it to get out. Somehow Adi gets out and bashes Manav for not bringing the nearby rope. Soon, they get attacked by a flock of vulture. Guddu and Johnny come across the Police Commissioner who then chases them both to a railway crossing. Avinash and Bindu try to cross a wooden bridge to get to the other side which breaks down. After luckily avoiding falling into the cliff, they realize that the villager was instead leading them to a restaurant called Highway which leads Avinash to beat him. Guddu and Johnny escape the Commissioner when a train collides with their car. Lallan and Jhingur jump off the crashing helicopter and land on a building under construction. Adi and Manav mess up with the remote and barely escape the burning car. Avinash and Bindu try to cross a river which gets filled by water when the dam gets opened and get swept to the edge of the waterfall. Guddu and Johnny get on a plane which they believe is going on a swimming trip but soon find out that it is actually going for skydiving trip. The both reluctantly jump off the plane. After somehow escaping near-death scenarios, everyone reaches Janakpur Zoo where they start finding the hidden money. They see that a man named Chinappa Swamy is planning to illegally close the zoo by killing all the animals. When the caretaker Prachi disagrees, he locks her inside the control station. The group then sees that Chinappa’s men are poisoning the animal’s food to kill them. When Jhingur, Manav, Johnny and Bindu ask to save them, the group decides to save the animals. Guddu comes across a lion and succeeds in keeping him from eating the poisoned steak. Lallan and Jhingur try to stop a baby gorilla from eating the poisoned bananas but Lallan gets beaten up by the father gorilla. Lallan saves the gorillas by convincing them to not eat the bananas. Adi and Manav try to rescue a baby elephant which has eaten the poisoned sugarcanes. They save him but the elephant pukes on Adi and the elephants thank them. Avinash and Bindu try to stop a tiger from eating the poisoned steak but Bindu gets chased by the tiger and she escapes him by climbing up a tree. Avinash then succeeds in convincing the tiger. Prachi gets freed when her pet monkey Security opens the door. After successfully saving the animals, the group confronts Chinappa but get saved when Security holds a gun to Chinappa’s face. The animals then chase Chinappa. The group finds the OK and decides to split the money equally between all of them. The Commissioner forgives Guddu and Johnny when he also receives the money. Avinash and Bindu forgive each other and decide to live happily together. Guddu falls in love with Prachi with Johnny asking if he can get a girlfriend too.

Ajay Devgn as Guddu Rastogi, a thief and Johnny’s partner. Later on in the movie, he falls in love with the caretaker, Prachi. Guddu claims to get the money for themselves because the money was stolen by them and belongs to them.
Anil Kapoor as Avinash “Avi” Patel, a businessman. He is Bindu’s husband and has a strained relationship with her. He tries for a divorce in the beginning of the movie but at the end, he accepts her and decides to live happily with her.
Madhuri Dixit as Bindiya “Bindu” Patel, a strong architect. She is Avinash’s wife and has a strained relationship with him. At the end, she forgives him and decides to live happily with him.
Riteish Deshmukh as Lallan Bhai, a fire officer who can do anything for money. He and his partner Jhingur try to bribe people and earn more money.
Arshad Warsi as Aditya “Adi” Shrivastav, a taxi driver. He is Manav’s twin brother and the more intelligent among the two.
Javed Jaffrey as Manav Shrivastav, a mentally disabled man. He is Adi’s twin brother and has a childish personality and always causes trouble for the duo.
Sanjay Mishra as Johnny, a thief. He is Guddu’s partner.
Pitobash Tripathy as Jhingur, a fire officer. He is Lallan’s assistant.
Esha Gupta as Prachi, the caretaker of the animals of Jankakpur Zoo. She has a pet monkey and later in the movie becomes Guddu’s love interest.
Johnny Lever as Raju. He is the pilot of Auto Chopper.
Boman Irani as Shamsher “Don” Singh. He is a Police Commissioner.
Vijay Patkar as Abbas Patkar. He is a police inspector and Don’s partner.
Manoj Pahwa as Pintu Choksey. He is Guddu and Johnny’s partner who betrayed them by taking Don’s money and hide it in Omkar Zoo.
Mahesh Manjrekar as Chinappa Swamy. He illegally attempts to close down Omkar Zoo.
Ali as the Tamilian jungle man. He leads Avi and Bindu to Hotel Highway, a South Indian restaurant.
Crystal the Monkey as Security. He is Prachi’s pet monkey.
Sudesh Lehri as Altaaf
Niharica Raizada as a woman with whom Adi falls in love.
Jackie Shroff as GPS (Voice only).
Sonakshi Sinha has a special appearance in the song ‘Mungda’.

Be the first to review “Total Dhamaal Dvd” Cancel reply