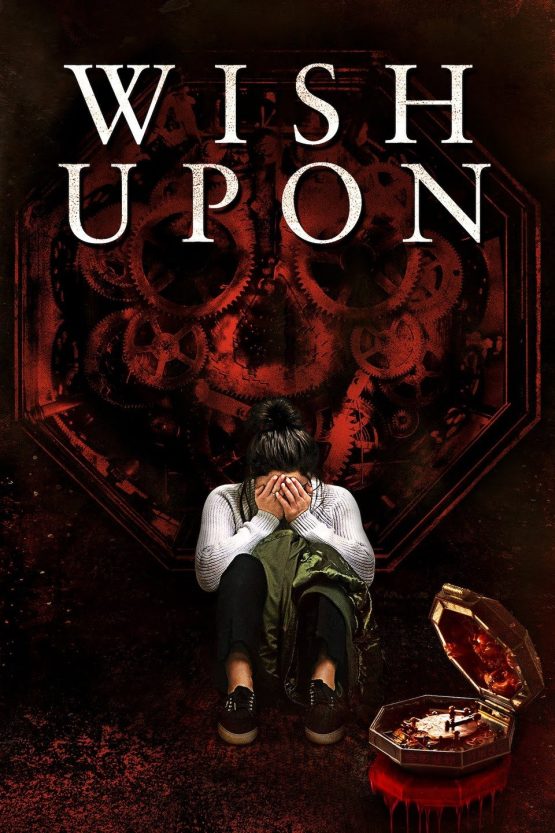 Clare Shannon, a 17-year-old girl, discovers a magic box with the ability to grant seven wishes. However, the people close to her start to die in very gruesome ways each time she uses it.

Wish Upon is a 2017 American supernatural horror film, directed by John R. Leonetti, written by Barbara Marshall, and starring Joey King, Ki Hong Lee, Sydney Park, Shannon Purser, Sherilyn Fenn, Elisabeth Rohm, and Ryan Phillippe. The film follows a teenage girl who is given a magic musicbox that grants seven wishes, but kills someone close to her each time it does.

The film was theatrically released on July 14, 2017, by Broad Green Pictures and Orion Pictures. It received negative reviews from critics and has grossed $23.5 million worldwide.

Clare Shannon, a seventeen-year-old high school student who is not part of the popular crowd, is haunted by the memory of her mother’s suicide by hanging, which she witnessed as a young child. Her father, Jonathan, a former musician and compulsive hoarder who dumpster dives as a hobby, finds a Chinese music box and gives it to her as an early birthday gift. Clare deciphers one of the numerous inscriptions on the box as “Seven Wishes,” and absentmindedly wishes for Darcie, her tormentor and school bully, to “rot,” at which point Darcie develops necrotizing fasciitis and is admitted into the ICU. That same day, Clare’s dog Max dies in her house’s crawlspace after seemingly being eaten alive by rats. Clare realizes that the box grants wishes, but does not understand that her wishes come with consequences.

Clare makes a second wish that a popular boy named Paul falls in love with her. As a result, her wealthy uncle dies. Upon hearing the news of his death, Clare then wishes she will be in the will. The relative leaves everything to Clare. Consequently Mrs. Deluca, a friendly neighbor, suffers a fatal accident. Clare enlists the help of her classmate Ryan Hui to decipher the symbols. Ryan’s cousin Gina helps Clare decipher the meaning of the symbols saying that each of the seven wishes upon wished, comes with consequences and that the rules have to be followed. Clare’s fourth wish is for her father to stop being a dumpster diver and he immediately has a personality shift. Soon after, Gina deciphers the meaning of the phrase which says “When the music ends, the blood price is paid.” After she warns Ryan, she dies. Ryan finds Gina’s body and confronts Clare about making wishes on the music box, which she denies.

Clare makes a fifth wish that she is popular, but Clare is soon unhappy with the consequent attention and that she loses her relationship with her friends. As a consequence of the wish, Meredith gets stuck in an elevator and, when the cable snaps, falls to her death.

Ryan reveals that after the seventh wish is granted, the music box will claim the soul of the owner. Attempts to destroy the box are unsuccessful. Furthermore, because June, a friend, has stolen the box, Clare loses her popularity and everything else she wished for. Clare recovers the box, but June is injured after falling down a staircase. Nevertheless, Clare’s sixth wish is that her mother never committed suicide. Clare’s mom knocks on her bedroom door along with two younger sisters. Clare later rummages through her mom’s paintings and sees a picture of the music box. She concludes that her mom was one of the previous owners of the music box and that it must have led to her original suicide.

When Clare realizes her dad pays the price for the sixth wish, Clare’s seventh wish is to go back to the day her father found the box, erasing all that has happened. This allows her to find the box before her dad does, she then asks Ryan to bury the box. Clare believes all is well, but she is killed when Darcie accidentally hits her with her car, in order to pay the final blood price. The music box can be heard after Clare’s death, indicating that the seventh wish to reverse time would be balanced by her own death and that the music box had indeed claimed her soul in the end.

In a mid-credits scene, Ryan prepares to bury the music box, but becomes intrigued by the inscription about the seven wishes and decides against burying the box, hence starting the vicious death cycle that Clare went through again.

Joey King as Clare Shannon, a high schooler who discovers a Chinese music box that grants her seven wishes.
Raegan Revord as young Clare
Ki Hong Lee as Ryan Hui, one of Clare’s classmates who helps her investigate the music box
Sydney Park as Meredith McNeil, one of Clare’s close friends
Shannon Purser as June Acosta, one of Clare’s close friends
Sherilyn Fenn as Mrs. Deluca, the Shannons’ neighbor and friend
Elisabeth Rohm as Johanna Shannon, Clare’s deceased mother
Ryan Phillippe as Jonathan Shannon, Clare’s father and a dumpster diver
Mitchell Slaggert as Paul Middlebrook, Clare’s classmate whom she is attracted to
Josephine Langford as Darcie Chapman, one of Clare’s classmates who regularly bullies her
Alice Lee as Gina Hsu, Ryan’s cousin who helps decipher the text on the music box
Alexander Nunez as Tyler Manguso, one of Darcie’s and Paul’s friends
Daniela Barbosa as Lola Sanchez, Darcie’s close friend and Paul’s girlfriend
Kevin Hanchard as Carl Morris, Jonathan’s friend
Victor Sutton as Uncle August, Clare’s wealthy uncle
Jerry O’Connell as Lawrence Hart, a previous owner of the music box. O’Connell was not credited for the role.[citation needed]

Be the first to review “Wish Upon Dvd” Cancel reply