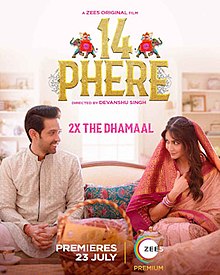 Sanjay is a Rajput from Jahanabad which is known for honour killings. He is in love with Aditi, a Jat from Jaipur whose father and elder brother will kill to keep their honour. Both are very close to their families, yet they want to get married. In order to live together, they plan to con their families by arranging a set of fake parents and reliable allies so that Sanjay can show Aditi as a Rajput girl and Aditi can show Sanjay as a Jat boy to get married before eloping to the US. Will they manage to make it.

Plot
Sanjay Lal Singh and Aditi Karwasra, two individuals belonging to different castes, fall in love and wish to get married. However, knowing their parents will disapprove, they hatch a plan to convince them.

Be the first to review “14 Phere dvd” Cancel reply