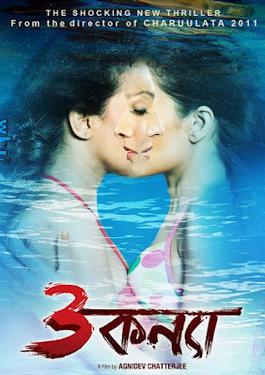 Aparna, a journalist, suspects that her husband is having an affair with Damini, an IPS officer. After her husband is abducted, she meets Damini and the two start an unlikely relationship.

3 Kanya or Teen Kanya (2012) is a Bengali psychological thriller film directed by Agnidev Chatterjee. The film tells a story of lives of three women. The characters are played by Rituparna Sengupta, Ananya Chatterjee and Unnati Davara.

The story of the film revolves around the lives of three women– Aparna, Damini and Nancy. Aparna is a journalist. She suspects that her husband is having an affair with Damini, an IPS officer. Aparna’s husband is kidnapped. Aparna goes to meet Damini and a relationship between Aparna and Damini begins. Nancy is a call-girl who is raped. She lodges a complaint to the local council but it goes in vain. She then approaches a news channel where Aparna is a journalist, Aparna helps her to get justice.

Be the first to review “3 Kanya Dvd” Cancel reply