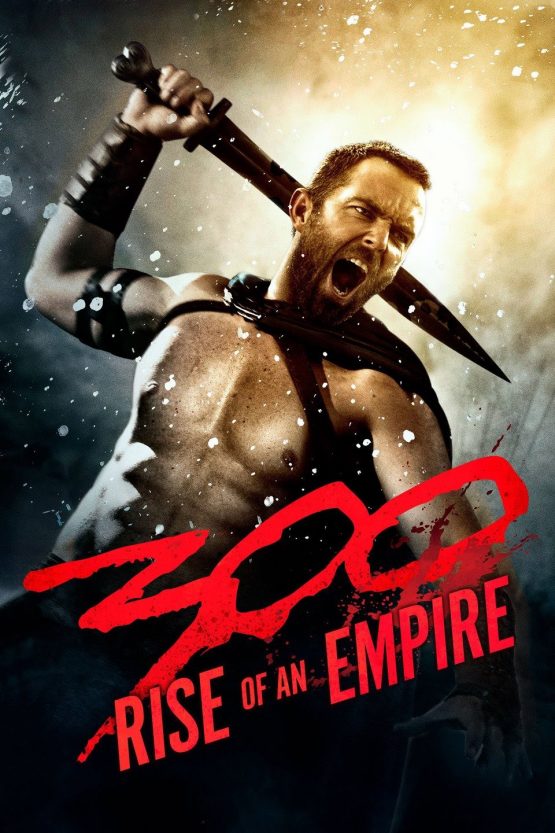 Xerxes sets out to control the major states of Greece with the help of his vast Persian army. Themistokles, the admiral of Athens, is forced to form an alliance with Sparta in order to save Athens.

300: Rise of an Empire is a 2014 American epic action film written and produced by Zack Snyder and directed by Noam Murro. It is a sequel to the 2007 film 300, taking place before, during, and after the main events of that film, and is loosely based on the Battle of Artemisium and the Battle of Salamis. It is based on the Frank Miller comic mini-series Xerxes: The Fall of the House of Darius and the Rise of Alexander (released April–September 2018).

The film was released to mixed reviews, with critics praising the action sequences, music, cinematography, visual effects and Green’s performance but criticizing the story and overstylized gore. It grossed over $337 million worldwide from a $110 million budget.

Queen Gorgo of Sparta tells her men about the Battle of Marathon, in which King Darius of Persia was killed by General Themistokles of Athens ten years earlier. Darius’s son, Xerxes, witnesses his father’s death and is advised to not continue the war since “only the gods can defeat the Greeks”. Darius’s naval commander, Artemisia, claims that Darius’ last words were, in fact, a challenge and sends Xerxes on a journey through the desert. Xerxes finally reaches a cave and bathes in an otherworldly liquid, emerging as the 8-foot tall “God-King”. He returns to Persia and declares war on Greece to avenge his father.

As Xerxes’s forces advance towards Thermopylae, Themistokles meets with the council and convinces them to provide him with a fleet to engage the Persians at the sea. Themistokles then travels to Sparta to ask King Leonidas for help, but is informed by Dilios that Leonidas is consulting the Oracle, and Gorgo is reluctant to side with Athens. Themistokles later reunites with his old friend Scyllias, who infiltrated the Persian troops and learned Artemisia was born Greek, but defected to Persia as her family was raped and murdered by Greek hoplites. She was taken as a sex slave and subsequently left for dead in the streets. She was rescued and adopted by a Persian emissary. Her lust for vengeance gained the attention of King Darius and he made her a naval commander after she killed many of his enemies. Themistokles also learns that Leonidas has marched to fight the Persians with only 300 men.

Themistokles leads his fleet of fifty warships and several thousand men, which include Scyllias, Scyllias’s son Calisto, and Themistokles’ right-hand man Aeskylos to the Aegean Sea, starting the Battle of Artemisium. They ram their ships into the Persian ships, charge them, slaughtering several soldiers before retreating from the sinking Persian ships. The following day, the Greeks feign a retreat and lead a group of Persian ships into a crevice, where they become stuck. The Greeks charge the Persian ships from the cliffs above and kill more Persians. Impressed with Themistokles’ skills, Artemisia brings him onto her ship where she has sex with him in an attempt to lure him to the Persian side as her second-in-command. They fight and make love simultaneously. He refuses her offer, causing her to dismiss him.

The Persians spill tar into the sea and send suicide bombers to swim to and board the Greek ships with their flame bombs. Artemisia and her men fire flaming arrows and torches to ignite the tar, but an Athenian manages to kill one of the Persians, who falls into the tar carrying a torch, causing ships from both sides to explode. Themistokles is thrown into the sea by an explosion and nearly drowns before being rescued by Aeskylos, and stands by Scyllias’s side as he succumbs to his injuries. Believing Themistokles to be dead, Artemisia and her forces withdraw. After recovering from his injuries, Themistokles learns that only a few hundred of his warriors and six of his ships survived the disastrous attack executed by Artemisia.

Daxos, an Arcadian general, tells Themistokles that Leonidas and his 300 men were killed after Ephialtes betrayed the Greeks to Xerxes. Themistokles returns to Athens and confronts Ephialtes. The deformed Spartan traitor reveals that Xerxes plans to attack and burn Athens to the ground. Ephialtes acknowledges and regrets his betrayal shamefully, and welcomes death. Themistokles spares him instead, so he can warn Xerxes that the Greek forces are gathering at Salamis. He then visits Gorgo in Sparta while she is mourning Leonidas’s death to ask for help, but Gorgo is angry for what the goal of a united Greece has cost her and her people. Before departing, Themistokles returns Leonidas’s sword, which had been delivered to him by Ephialtes under Xerxes’s orders, and urges Gorgo to avenge Leonidas.

In Athens, Xerxes’s army is laying waste when Ephialtes arrives to deliver Themistokles’ message. Upon learning he is alive, Artemisia leaves to ready her entire navy for battle. Xerxes suggests it is most likely a trap, but she still leaves after reminding him that she made him king through her efforts while he sat safely at a distance and watched. The remaining Greek ships charge into the Persians ships, and the two armies battle, beginning the decisive Battle of Salamis. Themistokles and Artemisia engage in a duel, which ends in a stalemate with both receiving severe injuries.

At this moment Gorgo, who had been narrating the tale to the Spartans, arrives at the battle along with ships from numerous Greek city states including Delphi, Thebes, Olympia, Arcadia, and Sparta, all of them uniting against the surrounded Persians. Daxos leads the Arcadian army while Themistokles urges Artemisia to surrender. Xerxes, watching the battle from a cliff, turns his back on her, acknowledging his naval defeat and continuing the march of his army. Artemisia tries to kill Themistokles one last time but is killed as he stabs her through the stomach. While Dilios leads the Greek assault, Themistokles and Gorgo take a moment to silently acknowledge one another’s alliance as the remaining Persians attempt a counter-attack. The three then charge at the opposing Persians with the whole Greek army.

Be the first to review “300: Rise of an Empire Dvd” Cancel reply