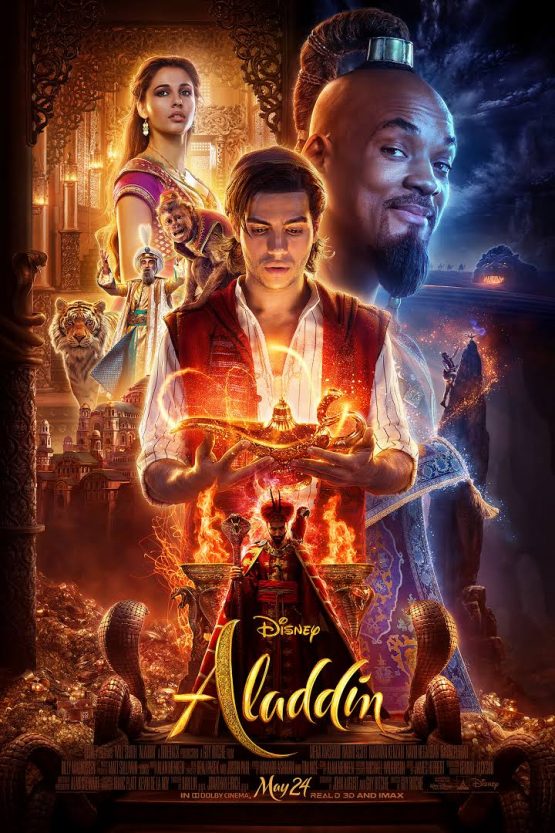 Aladdin, a kind thief, woos Jasmine, the princess of Agrabah, with the help of Genie. When Jafar, the grand vizier, tries to usurp the king, Jasmine, Aladdin and Genie must stop him from succeeding.

Aladdin is a 2019 American live-action animated musical fantasy film produced by Walt Disney Pictures. Directed by Guy Ritchie, from a script he co-wrote with John August, it is a live-action adaptation of Disney’s 1992 animated film of the same name, which itself is based on the eponymous tale from One Thousand and One Nights.[a] The film stars Will Smith, Mena Massoud, Naomi Scott, Marwan Kenzari, Navid Negahban, Nasim Pedrad, Billy Magnussen, and Numan Acar, as well as the voices of Alan Tudyk and Frank Welker, the latter of whom reprises his roles from all previous media. The plot follows Aladdin, a street urchin, as he falls in love with Princess Jasmine, befriends a wish-granting Genie, and battles the wicked Jafar.

In October 2016, Disney announced Ritchie would direct a live-action Aladdin remake. Smith was the first member of the cast to join, signing on to portray Genie in July 2017, and Massoud and Scott were confirmed for the two lead roles later that month. Principal photography began that September at Longcross Studios in Surrey, England, also filming in the Wadi Rum Desert in Jordan, and lasted until January 2018. Additional filming and pick-ups took place in August 2018.

Aladdin was theatrically released in the United States on May 24, 2019. It grossed $1 billion worldwide, becoming the ninth-highest-grossing film of 2019, and the 34th highest-grossing film of all-time. The film received mixed reviews from critics, with praise for its musical score, costume design, humor, and the performances of Smith, Massoud, and Scott, with criticism for Ritchie’s direction and the screenplay. A sequel is in development.

Aladdin, a street urchin in the Arabian city of Agrabah, and his monkey Abu meet Princess Jasmine, who has snuck away from her sheltered life in the palace. Jasmine wishes to succeed her father as Sultan, but is instead expected to marry one of her royal suitors, including the dimwitted Prince Anders. Jafar, the grand vizier, schemes to overthrow the Sultan and seeks a magic lamp hidden in the Cave of Wonders, but only “the diamond in the rough” can enter the cave.

After sneaking into the royal palace and visiting Jasmine, Aladdin is captured by Jafar. He offers to make Aladdin rich enough to impress Jasmine in exchange for retrieving the lamp, and warns him to take nothing else. Inside the cave, Aladdin frees a magic carpet and finds the lamp, but Abu couldn’t resist the treasure and causes the cave to collapse. Aladdin gives the lamp to Jafar, who kicks him and Abu into the cave, but Abu steals the lamp back.

Trapped in the cave, Aladdin rubs the lamp, unwittingly summoning the omnipotent Genie inside, who explains that he has the power to grant Aladdin three wishes. Aladdin tricks the Genie into freeing them from the cave without using a wish. Determined to woo Jasmine, he uses his first wish to become a prince, and promises to use his third wish to free the Genie from servitude and turn him human.

Aladdin makes an extravagant arrival at Agrabah as Prince Ali of Ababwa, but fails to impress Jasmine. Posing as the “prince’s” human servant, the Genie is mutually smitten with Dalia, Jasmine’s handmaiden. Aladdin and Jasmine bond when he takes her on a ride on the magic carpet. Tricked into revealing his true identity, he convinces her that he actually is a prince and dressed like a peasant to explore Agrabah.

Jafar discovers Aladdin’s identity and throws him into the palace moat, knowing that if he survives, it will prove he has the lamp. The Genie saves Aladdin, at the cost of his second wish. Aladdin returns to the palace and destroys Jafar’s magic staff, ending his spell over the Sultan and exposing his plot, and Jafar is imprisoned. The Sultan allows Aladdin to marry Jasmine. Aladdin decides to save his final wish, aware that he will lose Jasmine if the truth unfolds, much to the Genie’s disappointment.

Freed by his scarlet macaw sidekick, Iago, Jafar steals the lamp and becomes the Genie’s new master. He uses his first wish to become sultan, but Jasmine reminds the palace guards of their true loyalty, turning them against Jafar. Using his second wish to become the world’s most powerful sorcerer, Jafar exposes Aladdin and exiles him and Abu to a frozen wasteland, then threatens to kill the Sultan and Dalia unless Jasmine agrees to marry him. At the wedding, Jasmine seizes the lamp and escapes with Aladdin and Abu, who were rescued by the magic carpet. Pursued by Iago, whom Jafar briefly transforms into a roc, they are recaptured, destroying the magic carpet in the process.

Aladdin taunts Jafar for being second in power to the Genie, goading him into using his last wish to become “the most powerful being in the universe”, and the Genie transforms Jafar into an even more powerful genie. This traps Jafar inside his own lamp, dragging Iago with him, and the Genie banishes them to the Cave of Wonders. Aladdin keeps his promise and uses his last wish to free the Genie, allowing him to live as a human without magical powers. The Sultan crowns Jasmine the new sultana-regnant, no longer bound to marry a prince, and she and Aladdin marry. The Genie marries Dalia and they start a family and explore the world together.

Main article: List of Disney’s Aladdin characters
Mena Massoud as Aladdin:
An impoverished but kind-hearted Agrabah thief and street urchin who is in love with Princess Jasmine. Massoud said that Aladdin “sees a future for himself that’s greater than what’s been set out for him at the present moment. He doesn’t know exactly what it is or how he’s going to get there, but he knows it is out there,” and felt the character “[i]s very selfless and usually does things for other people, but as he falls in love he loses himself a little bit and starts to become someone that he’s not. But he’s a good person with good intentions and has good people surrounding him who lead him back to where he’s supposed to be.”
Naomi Scott as Princess Jasmine:
The Sultan’s daughter and the feisty princess of Agrabah who wants to have a say in how she lives her life. Scott said that the character “will be strong and have fun, but also get it wrong and be emotional. She’s a multidimensional woman, and she does not have to just be one thing. So in this movie, you see her go on such a roller coaster, as opposed to her one goal being to escape the loneliness of royalty and find a companion.” She further stated that Jasmine will try to find “the courage to speak out for her people,” and said that “Jasmine wants to know what goes on in her kingdom and reconcile the distance that has been created, and Aladdin gives her the courage to do just that.”
Will Smith as Genie / Mariner:
A comedically eccentric and kindly jinn who has the power to grant three wishes to whoever possesses his magic lamp. Smith said that he was “terrified” while playing the character, but that “[he] found a lane that pays homage” to Robin Williams’ performance in the original animated film, while still making the role “[his] own thing.” Smith described the character as “both a trickster and a mentor,” who tries “to guide Aladdin to the truth of the greatness that’s already within him.” Smith physically portrays the character when he is in the guise of a human, while his giant blue genie form is CGI, portrayed through motion-capture performance.
Marwan Kenzari as Jafar:
A nefarious, deceptive, power-hungry sorcerer and the Grand vizier of Agrabah who, frustrated with the Sultan’s ways of ruling, devises a plot to overthrow him as the ruler of Agrabah by acquiring the Genie’s lamp. Jafar’s backstory is explored in the film, which producer Jonathan Eirich felt would make the audience “understand why he’s so bad,” as “that’s what makes him such a good villain.”
Navid Negahban as The Sultan:
The wise and noble ruler of Agrabah who is eager to find a capable husband for his daughter Jasmine. On playing the character, Negahban said that it was “very scary because [the Sultan] has so many followers. Lots of people grew up with that character, so they have certain expectations. It’s not just an animated character. This has become a real personality, a real persona.” He further stated that “after I read the script, I felt that re-watching the original will pollute my vision of the live-action character. In the new Aladdin, the Sultan has more depth and is not a caricature of a father. But I will let you judge it for yourself.”
Nasim Pedrad as Dalia:
Jasmine’s loyal handmaiden and confidante. Pedrad said that Dalia “[has] been by Jasmine’s side for years and really looks out for her”. Dalia is the only new character from the main cast.
Billy Magnussen as Prince Anders:
A suitor and potential husband for Jasmine from the kingdom of Skånland.
Numan Acar as Hakim:
The head of the palace guards who is loyal to the Sultan of Agrabah, as his father worked for the Sultan as a palace servant.
Nina Wadia as Zulla:
A market trader. Wadia describes her appearance as “More of a cameo” as extra footage was needed after filming had wrapped.
Alan Tudyk as the voice of Iago:
Jafar’s sardonic and intelligent scarlet macaw companion. The film marks the first time that Gilbert Gottfried has not voiced the character. In this film, Iago is portrayed as a more realistic bird. However, he still retains his sardonicism and loyalty to Jafar.
Frank Welker reprises the following characters from previous films:
Abu, Aladdin’s kleptomaniac but loyal pet Tufted capuchin.
Rajah, Jasmine’s loyal and protective pet Bengal tiger.
The Cave of Wonders, a sand guardian who guards the magic lamp from intruders and only gives to someone who’s worthy, “a diamond in the rough”. Out of the three roles, this is the only one for which Welker receives credit.
Additionally, Tayliah Blair and Jordan A. Nash respectively play Genie and Dalia’s daughter and son, Lian and Omar.