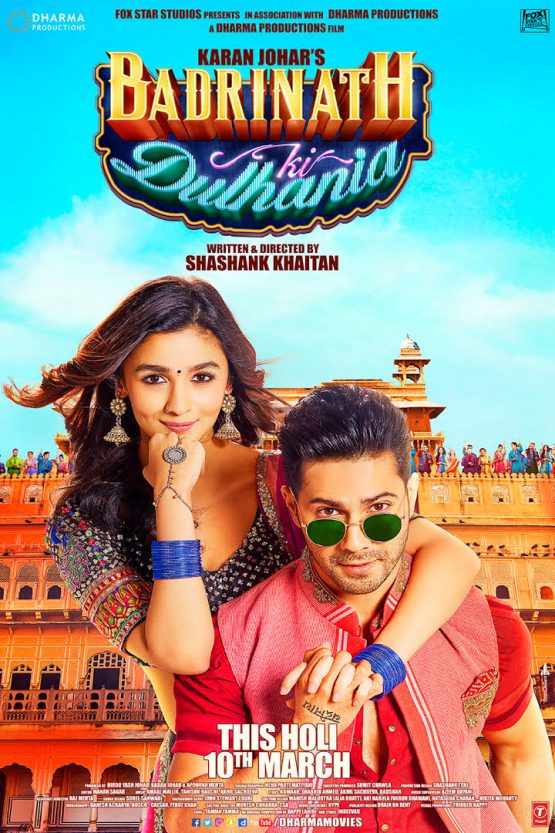 Badri, a wealthy man’s son, meets Vaidehi at a wedding and sparks fly between them. However, while he wants nothing more than to marry her, she yearns to pursue her dream of becoming an air hostess.

Badrinath Ki Dulhania marked the third collaboration between Dhawan and Bhatt following their previous films Student of the Year (2012) and Humpty Sharma Ki Dulhania (2014) both produced by Johar; the latter of which was also directed by Khaitan. It is the second installment in the Dulhania franchise. Principal photography began in May 2016 and it was filmed across Panvel, Singapore and Kota on a production budget of ₹270 million; ₹120 million were spent on the promotions, print and publicity costs of the film. Arijit Singh was among the singers signed for the film’s songs.

Badrinath Ki Dulhania was theatrically released in India on 10 March 2017, coinciding with the Holi weekend. The film became a financial success, earning over ₹1.90 billion worldwide at the box office. At the 63rd Filmfare Awards, it was nominated in eight categories including Best Film, Best Director for Khaitan, Best Actor for Dhawan and Best Actress for Bhatt; it won Best Male Playback Singer for Singh.

Badrinath “Badri” Bansal (Varun Dhawan) is the younger son of a wealthy family in Jhansi. In a flashback, it is shown that Badri’s elder brother, Aloknath “Alok” Bansal (Yash Sinha) was in love with a girl and was going to leave the family for her because their father disapproved, but decided against it after their father Ambarnath “Ambar” Bansal’s (Rituraj Singh) first heart attack. Now Alok is married to Urmila Shukla (Swetha Basu Prasad) through an arranged marriage and she is not allowed to work despite being very intelligent and better professionally trained than Alok himself. Alok is also depressed at having to leave his love and be forced into a marriage, so he spends a lot of his time drinking. Badri fears the same fate for himself and so when he sees the beautiful and educated Vaidehi Trivedi (Alia Bhatt) at a wedding supposedly being looked after by her father Mayank (Swanand Kirkire), he falls for her immense beauty and charm. He eventually becomes obsessed with her and makes it his mission to marry her with Ambar’s approval.

Vaidehi is an intelligent young woman, much more educated than Badri. She has completed her graduation and is secretly training to become a flight attendant while Badri has only passed the tenth grade. She’s initially uninterested in getting married and is offended by his marriage proposal. But when Badri helps Vaidehi’s elder sister, Kritika (Sukhmani Lamba) find a husband in Bhushan Mishra (Aparshakti Khurana) and even resolves a dowry crisis with Bhushan’s father Jitendra Mishra (Rajendra Sethi), Vaidehi agrees to marry him. On their wedding day, however, Vaidehi does not show up. Badri is heartbroken and Ambar is furious. Ambar commands Badri to find Vaidehi and bring her back so they can punish her. Despite being afraid of Ambar’s words, Badri goes to Mumbai to find Vaidehi, where he discovers that she’s already moved to Singapore for a flight attendant training program.

Badri shows up on Vaidehi’s doorstep in Singapore, and kidnaps her, pulling her into his car. On the way, he pulls over and lets her out of the car trunk and they have an emotional yet heated argument. Badri is furious at her for leaving him at the altar and she apologizes, trying to assure him that the reason she left was not because of him. Badri grabs her by the throat while venting out all his frustration and anger on her, when a police car pulls up and is about to arrest Badri for violently approaching Vaidehi, and while she defends him, they both are doubted and Badri is taken to the police station anyway and Vaidehi comes along for testifying. At the police station,Vaidehi covers up for Badri. Over the next few days, Badri follows Vaidehi. Alok calls and tells him that Ambar has started looking for other brides. This terrifies Badri and he attempts entry into Vaidehi’s workplace. She stops him and tells him she’ll marry him only if he can convince Ambar to let her work and live in Singapore. Badri gets drunk that night and causes a scene outside Vaidehi’s residential building and he is arrested by the police again, where this time Vaidehi has to pay $1500 to bail him out.

Badri moves into Vaidehi’s apartment where she cares for him by cooking for him before leaving for work every day, which humbles him. They spend time together with friends and tour Singapore together. Over time Badri begins to respect Vaidehi’s independence and is impressed by her job and intelligence. He also remembers Urmila and feels sorry that she doesn’t get to work, telling Vaidehi that she would be proud of her. Badri and Vaidehi begin to spend more time together which causes them to grow closer. When Ambar calls, Badri lies and tells him that he hasn’t found Vaidehi yet, and so Ambar tells Badri to return home. When Badri receives his passport back, Vaidehi invites him to party with her and his newly made friends. Later that night, Badri reveals that whoever Vaidehi marries is a lucky guy, yet she states that he talks too much while drunk. The next day Badri leaves for Jhansi and Vaidehi starts to miss him, depressed by his absence.

Back in Jhansi, Urmila is pregnant and Ambar holds a mega-pooja to ensure a boy is born. Badri feels sorry for her and misses Vaidehi at the same time, finally understanding why she ran away. Before the pooja, he gets heavily drunk and berates Ambar for being disrespectful. He blames Ambar for being the reason that he can’t have Vaidehi when suddenly he sees Vaidehi from the corner of his eye. She tells him that she loves him and wants to marry him. Together they stand up to Ambar and tell him that they will get married and Vaidehi will work as she pleases regardless of whether he agrees or not.

In the epilogue, it is shown that Badri and Vaidehi maintain a long distance relationship while she finishes her training program in Singapore before moving back to India and starting her own flight attendant training center. Urmila gives birth to twins, one boy and girl, and it is shown that so far Ambar has been treating both of them equally. She also starts working in the family’s car showroom with Alok and even gets her own cabin. Badri and Vaidehi promise not to collect any dowry for any of their children. The film ends when Badri and Vaidehi driving off on his motorbike, happily reunited.