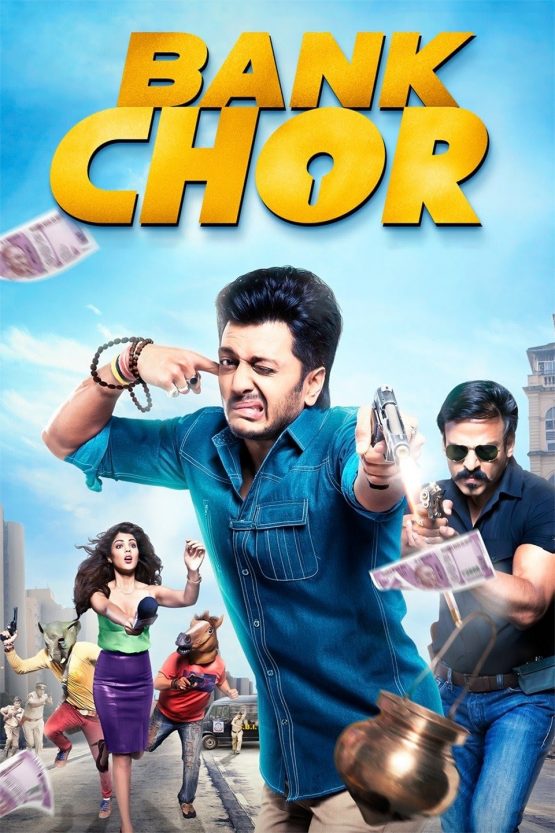 Champak, a bumbling fool, decides to rob a bank with the help of his two inexperienced friends from Delhi. However, their plan goes haywire causing the robbery to turn into a huge mess.

Bank Chor (transl. Bank robber) is a 2017 Indian Hindi-language black comedy film directed by Bumpy, written by Baljeet Singh Marwah and produced by Ashish Patil. The film was produced by Y-Films and distributed by Yash Raj Film. The film stars Riteish Deshmukh and Rhea Chakraborty, with Vivek Oberoi in a substantial role. Oberoi has returned to Yash Raj Films after 15 years, his last film under their banner was Saathiya. The film was released on 16 June 2017.

The plot starts with Champak Chandrakant Chiplunkar (Riteish Deshmukh) as a vaastu adherent, who is going to endeavor on a burglary according to his convictions. Two of his friends, Genda (Vikram Thapa) and Gulab (Bhuvan Arora), support him in his endeavour. This Journey of them soon unravels rather cumbersomely, pushing the folks on a wild voyage with hazardous results. Holding 28 individuals, including bank workers, security gatekeepers and clients, to recover, Champak masks as a sadhu and figures out how to stroll past security with weapons. Champak continues composing stories to persuade prisoners about his white collar class foundation to compensate for the fortune that has evaded him. In any case, things get off-track rapidly, making them run into Amjad Khan (Vivek Oberoi) who is a heartless CBI officer wanting to accomplish all the more talking through his firearm.

In the midst of everything there is a larger plot unfolding as the home minister presses the panic button. There is also the expected mad-media circus outside the bank led by crime reporter Gayatri Ganguly aka Gaga (Rhea Chakraborty). While there is lot of chaos made in the bank by hostages like a nervous housewife, a hyper cook, a perhaps covert cop, and rapper Baba Sehgal, Sahil Vaid, playing a Faizabadi ordinary citizen, there are lot of twists and turns happening side by side.

Be the first to review “Bank Chor Dvd” Cancel reply