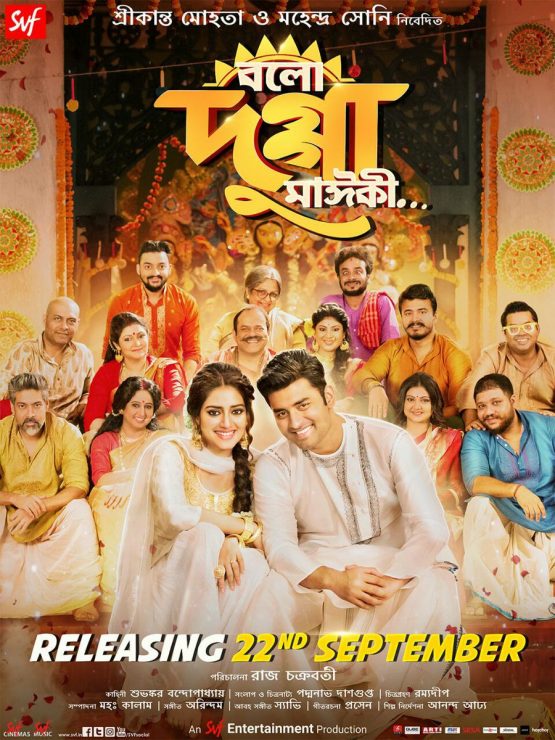 Shamyo, an easy-going and indulgent man, takes a picture of himself with a woman named Uma. However, he gets into trouble when Uma’s family sees the photo and thinks that she has eloped with him.

Bolo Dugga Maiki is an Indian Bengali language romantic comedy film directed by Raj Chakraborty and produced by Shrikant Mohta and Mahendra Soni under the banner of Shree Venkatesh Films. The film stars Ankush Hazra and Nusrat Jahan in lead roles. The movie is partially based on the 2015 Malayalam movie Oru Vadakkan Selfie.

Shamyo (Ankush Hazra) is a carefree man who lives an extravagant life with his two best friends Bangal (Sourav Das) & Totlu (Rajdeep Ghosh). Due to his activities, he is disowned and forced to leave his home. The story follows the misadventures of Shamyo after leaving his house. Problems arrived when he took selfies with an unknown girl (Uma, played by Nusrat Jahan) and send those selfies to his best friends through their WhatsApp group on a train journey. As his best friends posted selfie on Facebook, Uma’s family members misunderstood that Shamyo was the guy with whom Uma eloped. But Uma’s grandmother accepted Shamyo as her grandson-in-law. Unhappy with her decision , the 5 brothers ought to take revenge on Shamyo. After winning the ‘dhunuchi nach’ competition , Uma’s family accepted Shamyo and arranged for their wedding. But Shamyo complicated the situation by returning to his grandfather without telling anyone of Uma’s family. On the other hand , Uma came to know that she was adopted by her family and so left the house. But Shamyo returned her to her family . Shamyo’s grandfather saw the change in his grandson and accepted the wedding of Shamyo with Uma.