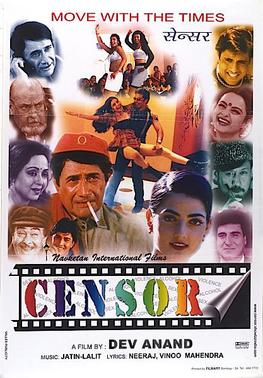 A director struggles against the Indian Censor Board to try and get his film passed without too many cuts. But it is an uphill task and he faces many problems while trying to achieve his goal.

Censor is a 2001 Bollywood drama film directed and produced by Dev Anand. It stars himself, Hema Malini, Jackie Shroff and Rekha in pivotal roles. The film satirises the film censorship in India.

Under the directions of the Minister for Information and Broadcasting, the Indian Censor Board prepares a list of cuts for Bollywood film producer, Vikramjeet’s new movie “Aane Wala Kal”. Vikramjeet is unhappy and decides to meet the Minister himself to appeal against these cuts, only to find out that the Minister favors even more cuts. Then Vikramjeet shows this movie in a private theatre to an audience from all walks of life, he then takes their written opinion, smuggles a copy to America, just in time to ensure that it is nominated for an Oscar. This is where Vikramjeet’s troubles start as the Censor Board refuses to grant a “U” certificate; he is arrested for smuggling the movie without permission from the Reserve Bank of India. The only way he can escape the wrath of the authorities is getting some fans and stars of his movie to gather some dirt on the Censor Board members and expose them publicly.

Be the first to review “Censor Dvd” Cancel reply