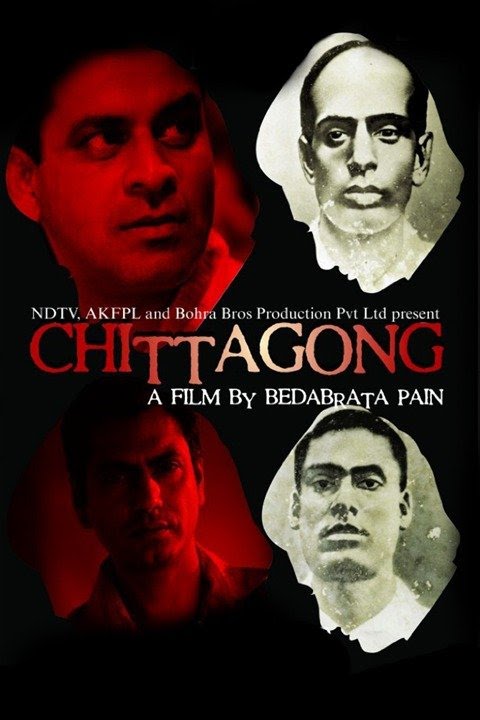 Jhunku, a 14-year-old youth in 1930s British Bangladesh, embarks on a journey to determine where he belongs.

Chittagong is a 2012 Indian historical war drama film directed by Bedabrata Pain. It stars Manoj Bajpayee in the lead role and is based upon events of British India’s Chittagong Uprising. The film features music by trio Shankar Ehsaan Loy and sound by Resul Pookutty. The world premier of film was on 10 April 2012. Chittagong released on 12 October 2012 and nett grossed Rs 3.1 million at the Indian box office. This movie won the 60th National Film Awards for the Best Debut Film of a Director.

The story is set against the backdrop of a little-known saga in 1930s British colonial India’s East Bengal (now Bangladesh) where a group of schoolboys and young women, led by a schoolteacher Masterda Surya Sen (Manoj Bajpayee), dared to take on the Empire. Chittagong is the story of a diffident 14-year-old boy, Jhunku (Delzad Hiwale). Swept up into this seemingly impossible mission, the reluctant teenager battles with self-doubts to achieve an improbable triumph.

Jhunku, now a 23-year-old youth, is being chased by the Bengal police. He hides himself in a bunker with his childhood friend Aparna (Apu/Opu). While hiding, he begins to reflect on his past hopes and dreams. The story goes to a flashback to narrate the events that happened 10 years ago.

In 1930, Surya Sen and his followers are protesting the death of the revolutionary Jatin Das. Jhunku is not allowed to join them by his lawyer father who wants him to study in England. Apart from fearing his father, Jhunku is also torn between his admiration and respect for the magistrate, Wilkinson Barry John and his wife, who show great likings for him and his fascination for the charismatic figure of Masterda, who is followed and revered by most of his friends. Jhunku, due to his faith in Wilkinson who is personally against torturing revolutionaries, has great belief in British justice and believes that by getting an English education he might better equip himself to free his country. This causes arguments between him and his friends, especially Aparna. Wilkinson is opposed by the police inspector Major Johnson who defies his orders and arrests the protesters, and badly tortures Masterda.

In protest, some students hit the strict police officer Maj. Johnson (Alexx O’Nell) by spilling oil under his motorbike, making him fall. Enraged, Johnson makes random enquiries about the culprits but are unsuccessful. However, Wilkinson manages to confirm the truth out of Jhunku, and an enraged Johnson then shoots Sukhen (Shaheb Bhattacharya), one of the boys involved. This incident makes Jhunku an outcast amongst his friends, and he becomes determined to avenge the death of Sukhen. Soon afterwards, Johnson is made the DIG of police although Wilkinson had requested his transfer. This incident further shocks Jhunku. All his faith on his tutor Sir Wilkinson is lost, and he joins Masterda’s army. Meanwhile Pritilata Waddedar (Vega Tamotia) a school teacher by profession, is fascinated by the ideologies of Masterda and has great admiration for him. She wishes to join him in his future plans against the British Rule. She also appears to be in love with Nirmal sen (Nawazuddin Siddiqui) but he is reluctant to express his feelings.

Masterda and his comrades Nirmal Sen, Loknath Bal (Rajkummar Rao), Ambika Chakraborthy (Dibyendu Bhattacharya) and Ananta Singh (Jaideep Ahlawat) train the 50-odd students and plan to capture the town of Chittagong on 18 April 1930 by disconnecting all modes of communication. As per plan, the armoury of the police is captured by a group of revolutionaries led by Ganesh Ghosh and revolutionaries, led by Lokenath Baul takes over the Auxiliary Force armoury. Unfortunately the machine guns are not located. The revolutionaries also dislocate telephone and telegraph communications and disrupt the movement of the trains. After the successful raids, all the revolutionary groups gathered outside the police armoury where Surya Sen takes a military salute, hoisting the national flag and proclaims a provisional revolutionary government. The whole town is overjoyed at the success of Indian Republican Army and Chittagong is officially conquered by Surya Sen and his boys for one day. However, reinforcements from Calcutta soon set out to capture the rebels. Knowing of the army attack, the revolutionaries leave town before dawn and march towards the Jalalabad hill ranges, looking for a safe place. But the British Army’s first wave is demolished by Masterda’s teenagers. This enrages the British and they bring in machine guns. Harish also known as Tegra, the younger brother of Lokenath and a friend of Jhunku, dies.

Soon after revolutionaries disperse in smaller groups, to nearby villages. Ahsanullah Khan (Anurag Arora) from CID comes to Chittagong and cracks down on the revolutionaries. Jhunku is arrested and is severely beaten by Johnson and Ahsanullah during interrogation; he refuses to betray his leaders and comrades. He is sentenced to Kaala-Paani for life imprisonment. In due course, many revolutionaries and police officials are killed in the gun fights including noted revolutionary Nirmal Sen and police CID chief Ahsanullah. However, Pritilata Waddedar successfully attacks the Pahartali European Club and assassinates DIG Johnson; being gravely wounded she commits suicide by swallowing cyanide.

After a prolonged search, police search and arrests Master Da Surya Sen and sentences him to death by hanging. Thus Jhunku ends narrating the part and says that he was released in 1939 and again participated in the uprisings with Aparna. In one such incident there is a plan to attack the government godowns where the Britishers and feudal landlords have kept common peasant’s grain. The British block all the roads to godowns leading Jhunku to an idea to create underground dungeons till the granaries. Twenty villages join hands and operate. The last scene shows Jhunku being stopped by Maj. Wilkinson who says he is still sympathetic to Jhunku and wants him to go away else he will be bound to arrest him once again. Jhunku signals to Wilkinson that everyone is awake and shows him the mass crowd arising from the dungeons and heading towards the government granaries that forces Wilkinson to retreat. This is named the Tebagha Uprising of 1945, which marked the end of British Raj in India. The film ends with the memorable song “Ishaan.”

Be the first to review “Chittagong Dvd” Cancel reply