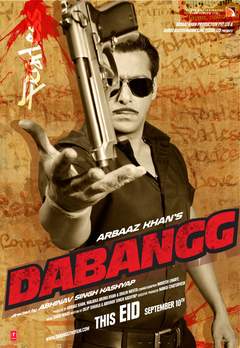 Dabangg is set in the Indian state of Uttar Pradesh, and tells the story of a fearless police officer, Chulbul Pandey, and his troubled relationship with his stepfather and half-brother. Made with a budget of ₹300 million and marketed at ₹120 million, Dabangg was shot primarily in the town of Wai in Maharashtra, while other major scenes were shot in the United Arab Emirates.

Dabangg was released during Eid-Ul-Fitr on 10 September 2010 in nearly 2100 cinemas worldwide. It opened to generally positive reviews, and went on to gross ₹2.19 billion ($47 million) worldwide. It is the highest-grossing Bollywood film of 2010. Dabangg has won several awards—the National Film Award for Best Popular Film Providing Wholesome Entertainment and six Filmfare Awards, including Best Film and Best Female Debut (Sinha). Later remade in Tamil as Osthe and in Telugu as Gabbar Singh, the film was followed by two sequels: Dabangg 2 (2012) and Dabangg 3 (2019). The latter serves as a partial prequel, describing a flashback which formed the events of Dabangg itself.

Chulbul Pandey, a young boy, lives with his younger half-brother, Makkhanchand “Makkhi” Pandey, stepfather Prajapati Pandey and mother, Naina Devi in Laalgunj, Uttar Pradesh. He has a troubled relationship with Prajapati and Makkhi. After 21 years, Chulbul becomes a policeman. Chulbul, who calls himself “Robin Hood” Pandey, still lives with his family. Makkhi is in love with Nirmala, whose father Masterji opposes the relationship. Chulbul falls in love with a girl named Rajjo, whom he meets during a police chase culminating in an encounter.

A corrupt political leader named Chedi Singh meets Chulbul and both quickly become enemies. Makkhi asks Prajapati to arrange his marriage with Nirmala. Prajapati refuses because he needs money to repay the loans he took to make his factory, and he believes that he can acquire money through his son marrying a rich girl. In desperate need of money, Makkhi steals some cash from Chulbul’s cupboard and gives the stolen cash to Masterji, hoping that he will permit Makkhi to marry Nirmala. Meanwhile, Chulbul meets Rajjo and proposes marriage, which she rejects, as she has to take care of her father, Hariya—a drunkard.

Chulbul comes home to find his mother, Naini Devi, dead. He goes to Prajapati to make peace, as he is the only family left. However, Prajapati refuses and despises him as an outcast. Makkhi invites Chulbul to his marriage with Nirmala. Chulbul convinces Hariya to marry Rajjo. Hariya commits suicide, as he knows that Rajjo will not marry anyone while he is alive. Chulbul takes Rajjo to Makkhi’s exuberant wedding. Realising that Makkhi has stolen his money to finance the wedding, Chulbul marries Rajjo in an impromptu ceremony. Masterji feels disgraced and cancels Makkhi’s wedding with Nirmala.

Makkhi beats up one of the workers in his factory due to a small mishap. The worker goes to the police station with his mother to file a complaint. Chulbul beats up Makkhi in public to disgrace him. Chedi takes advantage of the situation and takes Makkhi along with Prajapati to the police station. Prajapati resolves the situation by accepting an apology from Chulbul but still Chulbul slaps his brother as a form of disgrace. Chulbul meets Dayal Sahu a.k.a. Dayal Babu, a local political leader, who also dislikes Chedi. With his help, Chulbul adulterates Chedi’s breweries and wrongly frames him for it.

To take revenge, Chedi burns Makkhi’s factory. Prajapati, shocked, suffers a heart attack and is hospitalised. Makkhi goes to Chedi for help, little knowing that he was the one responsible. Chedi agrees to finance Prajapati’s treatment if he delivers a crate of mangoes to Dayal Babu’s house. Unbeknownst to Makkhi, Chedi has placed a bomb inside the crate, which explodes after he leaves, killing Dayal Babu. Chedi gives Makkhi a task to kill Chulbul. Makkhi accepts, but ends up confessing it to Chulbul. He reveals to Chulbul that Chedi made him plant the bomb unknowingly. Chulbul forgives him and reconciles with him. During a final confrontation between Chulbul and Chedi, Makkhi reveals to Chulbul that it was Chedi, who killed Naini. Enraged, Chulbul suffocates Chedi to death. Later, Chulbul gets Makkhi married to Nirmala in the presence of her father, while Rajjo reveals that she is pregnant.

Be the first to review “Dabangg Dvd” Cancel reply