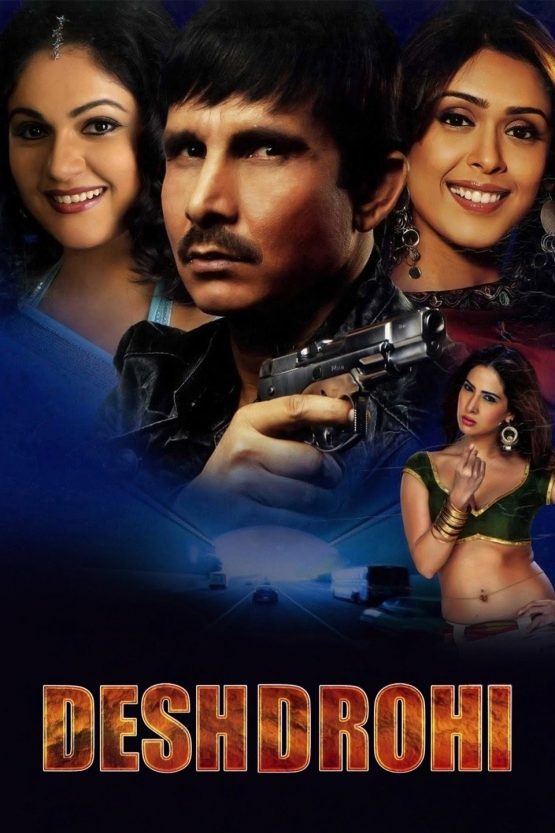 Raja arrives in Mumbai looking for a job but ends up killing the brother of a local drug dealer. Realising the corrupt nature of politics, he goes on a killing spree and kills ten people in 24 hours.

Deshdrohi (English: Anti-National) is a 2008 Indian Hindi-language action thriller film directed by Jagdish A. Sharma. It was scripted and produced by Kamaal Rashid Khan, who also appeared in the lead role alongside Manoj Tiwari, Hrishitaa Bhatt, Gracy Singh and Zulfi Syed.

The film was bashed by critics and audiences alike for its illogical scenes, weak story and poor performances. The film was a commercial failure.

A sequel titled Deshdrohi 2 was released on YouTube as a short film. The sequel was based on the conviction of Syed Abdul Karim Tunda.

The theme of the film consists of politics, prostitution, pimp business, and corruption. At the start of the film, a man named Raja Yadav (Kamaal Rashid Khan) arrives in Mumbai from Uttar Pradesh searching for a watchman’s job, after leaving his father and neighbour, Neha, both behind in his village in Uttar Pradesh.

In Mumbai Raja meets Shekhar, a gangster, who works as a watchman and a pimp, and Sonia, who works for Baba Kadam, a drug dealer. At one point Raja helps Sonia escape from an attack by a group working for another drug dealer called Rajan Nayak, the enemy of Baba Kadam. The two eventually fall in love.

After realizing that living in Mumbai is particularly difficult for North Indians, Raja petitions Shrivastav, a North Indian politician who exploits common people for his political career, for help. The drug mafia of Mumbai city is assisted by politicians and the media want to reveal the corruption prevalent in the city.

Due to his involvement, Raja is marked for death by Rajan Nayak, who contracts a police inspector to kill both him and Sonia. However, he fails and is killed. The police pursue Raja and Sonia, who is also running from Rajan Nayak. Raja attempts to get help from Shrivastav to no avail, and even Sonia’s boss, Baba Kadam, abandons the pair.

Pushed to the limit, Raja resolves to kill all involved, in which he is helped by Inspector Rohit Raghav, the new husband of Raja’s village sweetheart, to kill Shrivastav.

How Raja and Sonia will escape the law and teach the criminals a lesson is the story of the film.

Be the first to review “Deshdrohi Dvd” Cancel reply