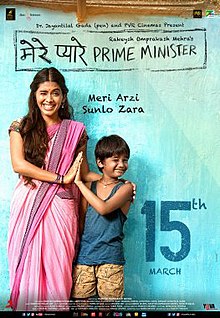 After his mother is raped one night, Kannu, an eight-year-old boy, writes a letter to the prime minister of India and embarks on a journey from Mumbai to Delhi with his two friends.

Mere Pyare Prime Minister (transl. My Dear Prime Minister…) is an 2018 Indian Hindi-language social-drama film directed by Rakeysh Omprakash Mehra. It stars Anjali Patil, Om Kanojiya, Atul Kulkarni, Makrand Deshpande, Niteesh Wadhwa and Rasika Agashe. The film follows an 8-year-old boy who decides to write a letter to the Prime Minister of India after his mother is raped. The film brings into focus the issues of defecation in open and sanitation problems faced in slums. It was the only Asian film which was screened at the Rome Film Festival. The film was released on 15 March 2019 in theatres.

The story revolves around the film’s eight-year-old protagonist, Kannu (Kanojia), who lives in a slum and dreams of building a toilet for his mother. After his mother Sargam (Patil) gets raped when she goes out in the night to defecate in the open, Kannu takes charge of improving the conditions in the slum.

In his quest to build a toilet, Kannu writes a letter to the prime minister and travels to Delhi from Mumbai with his comrades Ringtone (Bharti) and Nirala (Prasad). The fourth member of their gang Mangla(Syna Anand) is providing support to the family back in Mumbai.