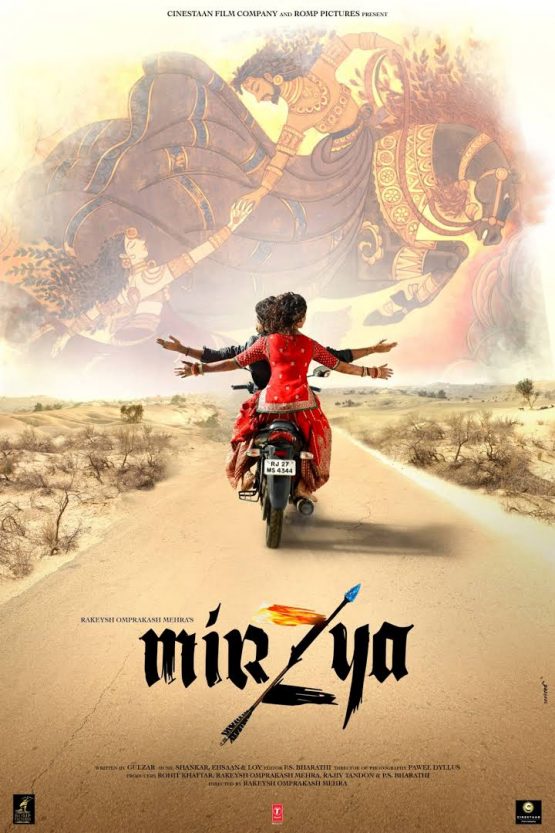 Childhood sweethearts Monish and Suchitra get separated while growing up. Their romance reignites when they meet as adults, but she is engaged to the local prince.

Mirzya (transl. O Mirza) is a 2016 Indian Hindi-language epic fantasy romance film directed by Rakeysh Omprakash Mehra. Produced by Cinestaan Film Company and Mehra under his ROM Pictures, it stars Harshvardhan Kapoor and Saiyami Kher in lead roles along with Anuj Choudhry, Om Puri, Art Malik, K. K. Raina, and Anjali Patil in supporting roles. The basic premise of the film is inspired by the Punjabi folklore of Mirza Sahiban. Mirzya was released in India on 7 October 2016. The film received mixed critical reception and was a box office bomb, grossing ₹10 crore against a budget of ₹450 million.

Mirzya tells the tale of a pair of lovebirds who were never meant to be together. Mohnish (Harshvardhan Kapoor) is a horse groomsman who reconnects with his childhood friend Suchitra (Saiyami Kher), a soon to be princess.

Mohnish and Suchitra are inseparable friends and classmates in high school in Jodhpur. One day, the schoolmaster canes Suchi for not doing her homework. Mohnish cannot bear the sight of her being hurt, and later shoots the teacher with a gun he stole from Suchi’s father, a policeman. As a result, he is sent to a juvenile correction facility, and Suchitra’s father sends her away to London for higher studies. Mohnish escapes the correction home.

Years later, Suchitra returns to India and is now getting engaged to Prince Karan. She wants to learn riding, and Karan instructs the stable-hand, Aadil, to teach her. Suchitra gets a feeling of deja vu and eventually discovers that Aadil is her childhood friend, Mohnish. The two of them kiss and reconcile.

They become inseparable again, and Suchi tells Aadil to confess to her father that he is ready to seek due punishment for the murder he committed in his childhood. However, when Aadil tries to tell Suchi’s father that he wants to make amends for his wrongdoing and wishes to marry Suchi, her unforgiving father and Karan hatch a plot to get rid of him. Karan attempts to shoot him, and although injured, Aadil doesn’t die.

Unable to find Aadil anymore, Suchi agrees to marry Karan. On the wedding day, Aadil’s friend, a Muslim girl, comes to Suchi’s rescue. She ensures Suchi and Aadil escape on his bike, and the lovers elope. They share a few moments of love and freedom on their desert ride. However, when the bike runs out of petrol, they are chased down by the police, Suchi’s father, and Prince Karan. Aadil’s friend slits her wrists and dies because she knows that if she gets caught, she will have to reveal her friends’ whereabouts. Just as they reach the Rajasthan border, Aadil is shot; Suchi swallows poison and they die in one another’s arms.

Be the first to review “Mirzya Dvd” Cancel reply