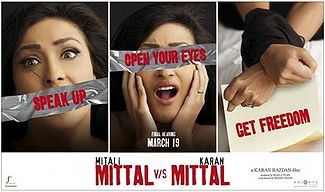 Mittal v/s Mittal is a 2010 Bollywood film written and directed by Karan Razdan and produced by Rajeev Kore and Dinesh Chugh.

Mittal v/s Mittal is a 2010 Bollywood film written and directed by Karan Razdan and produced by Rajeev Kore and Dinesh Chugh. The film traces a case on file that fights for the rights of women who are subjugated to domestic violence and inhuman treatment at the hands of husbands and in-laws, a case that will empower women to fight for their pride, respect and their very right to live with dignity. The film was released on 26 March 2010.

Mitali, a successful model, meets Karan, the Mittal scion, the heir to one of the richest families in the country. Mitali ‘s simple, middle-class upbringing is in complete contrast to Karan’s super-brat lifestyle. But Karan was smitten by Mitali. Accustomed to getting what he wants in life, Karan landed up at Mitali’s home with his parents with a marriage proposal. Delighted at their daughter’s luck, Mitali’s family approves the match and they both get married.

It was not long before Mitali’s dreams turned into her worst nightmare. Her mother-in-law detested her and created misunderstandings between Karan and her. Karan turned out to be a puppet in his mother’s hands and her father-in-law is a helpless, mute spectator. Karan has a certain pattern of dealing with women and wanted to subdue Mitali’s independent streak. He who appeared to be a loving husband was in fact a violent monster at night within the privacy of their bedroom. Unable to bear the humiliation and pain after she resisted his advances and is raped by him, Mitali decided to take charge of her life. She decided to fight back. Mitali walked out of her in-laws home, hired a lawyer and filed a case against her husband. Karan retaliated by hiring the best lawyer money can buy to fight on his behalf.

The film however was not received well by many and was never available online after its theatrical run for unknown reasons.