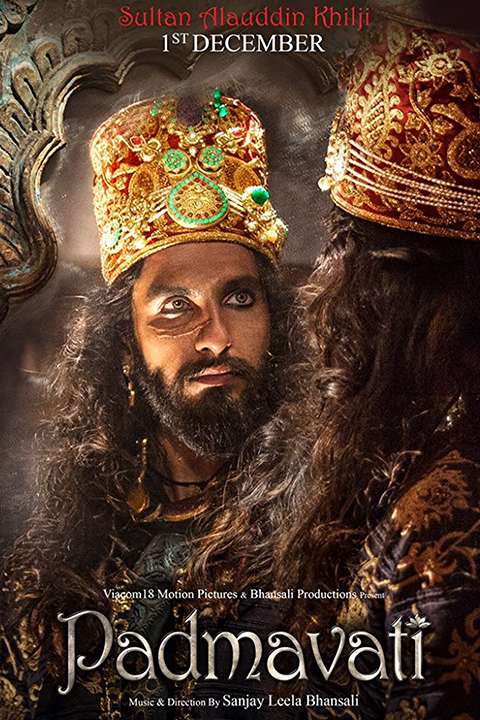 Queen Padmavati is happily married to a Rajput ruler until a tyrant Sultan, Alauddin Khilji, enters their life and calls a war on their kingdom due to his obsession with the queen.

With a production budget of ₹215 crore (US$30 million), Padmaavat is one of the most expensive Indian films ever made. Initially scheduled for release on 1 December 2017, Padmaavat faced numerous controversies. Amid violent protests, its release was indefinitely delayed. In December, the Central Board of Film Certification approved the film with few changes, which includes the addition of multiple disclaimers and a change from its original title Padmavati. Padmaavat was rescheduled for release on 25 January 2018 in 2D, 3D and IMAX 3D formats, making it the first Indian film to be released in IMAX 3D.

Padmaavat received mixed reviews. Critics praised the visuals, the cinematography and Singh’s portrayal of Khilji, but criticised its storyline, execution, length and adherence to regressive patriarchal mores. Critics also disliked the portrayal of Khilji as a stereotypical evil Muslim king and Ratan Singh as the righteous Hindu king. Despite not being released in some states of India, it grossed over ₹5.85 billion (US$82 million) at the box office, becoming a commercial success and one of the highest-grossing Indian films of all time. At 64th Filmfare Awards, Padmaavat received a leading 18 nominations, and won four awards, including Best Actor (Critics) for Singh. It also won three National Film Awards, including Best Music Direction for Bhansali.

In 13th-century Afghanistan, Jalal-ud-din Khalji of the Khalji dynasty plans to take over the throne of Delhi. His nephew Alauddin Khalji  asks for Jalaluddin’s daughter Mehrunisa’s hand in marriage. Their wedding is organised, but on the night of the event, Alauddin engages in adultery with another woman. A courtier witnesses the act and is killed by Alauddin. Mehrunisa is informed of this during the wedding, leaving her horrified.

Sinhala (modern-day Sri Lanka) princess Padmavati accidentally wounds Rajput ruler Maharawal Ratan Singh while hunting in a forest. As she treats him, he reveals that he has traveled to Sinhala to acquire rare pearls for his first wife Nagmati. Eventually, the two bond and fall in love. Ratan Singh asks for Padmavati’s hand in marriage, she agrees and with permission from her father, they are married.

Jalaluddin takes over the throne of Delhi and sends Alauddin to repel a Mongol invasion. Alauddin is successful in doing so, but undertakes an unsanctioned raid on Devagiri. He captures the princess there, assassinates her husband, and makes her his concubine. Jalaluddin’s wife and nephew warn him against Alauddin’s ambition to take over the throne; he journeys to Kara to meet Alauddin and gifts him the slave Malik Kafur. Over time, Alauddin and Kafur become close (and possible intimate), and Kafur rises to become a general in Alauddin’s army. Alauddin has Jalaluddin and his ministers assassinated and declares himself the new Sultan.

Padmavati journeys to Mewar with Ratan Singh and is blessed by his royal priest, Raghav Chetan. After Chetan is banished for witnessing an intimate moment between Ratan and Padmavati, he travels to Delhi and informs Alauddin of Padmavati’s beauty. Alauddin, who is fixated with having anything that is exceptional, invites the Rajputs to Delhi but his invitation is rejected. Enraged, he lays siege to Ratan Singh’s capital Chittor. After six months of an unsuccessful siege, Alauddin feigns peace on account of Holi and is allowed to enter Chittor where he meets Ratan Singh. He asks to see Padmavati; Ratan Singh grants this request, but only momentarily while preventing Alauddin from seeing her face. Eventually, Alauddin’s siege succeeds and Ratan is taken prisoner.

Upon Queen Nagmati’s insistence, Padmavati agrees to see Alauddin under some conditions: she will meet Ratan first; and Chetan will be executed for his earlier treachery. Alauddin agrees; Padmavati then travels to Delhi to meet him. Meanwhile, Alauddin survives an assassination plot by his nephew, though he is wounded. He tracks down his nephew and kills him. The Rajputs, disguised in women’s dress, plan to ambush the Khilji soldiers in the morning, at the time for morning namāz. Padmavati, along with Chittor’s generals, Gora and Badal, free Ratan Singh, and escape with Mehrunisa’s help. Ratan confronts Alauddin, who urges Ratan to take this opportunity to kill him in his weakened state. However, Ratan refuses as this is against the Rajput credo of not attacking the wounded. The Rajput ambush goes ahead as planned, but the Khilji soldiers are alert to it and repulse the attack, killing the attacking Rajputs.

Alauddin imprisons Mehrunisa for helping the Rajputs and marches to Chittor. He and Ratan Singh engage in a single duel; Alauddin drops his sword but Ratan doesn’t kill him as he is unarmed; Kafur takes the opportunity to mortally wound Ratan while his back is turned. While dying, he berates the Khilji forces for fighting dishonorably. The Khilji army defeats the Rajputs and captures Chittor, but are unable to capture the Rajput women who perform jauhar (mass suicide) along with Padmavati.

Deepika Padukone as Padmavati – a 13th-14th century legendary Rajput queen, who was, according to Padmavat, the wife of Rajput king Ratan Singh (also known as Ratan Sen), the ruler of Mewar. The news of Padmavati’s beauty reached Sultan Alauddin Khilji, who besieged Singh’s capital, Chittor, motivated by his desire to capture the queen.
Shahid Kapoor as Ratan Singh – the last Rajput ruler of the Guhila dynasty that ruled the kingdom of Mewar. He was defeated by Alauddin Khilji’s forces during the siege of Chittor.
Ranveer Singh as Alauddin Khalji – the second and most powerful ruler of the Khalji dynasty that ruled the Delhi Sultanate. He ascended the throne by murdering his paternal uncle and father-in-law, Sultan Jalal-ud-din Khalji. According to Padmavat, Khilji laid siege to Chittor motivated by his desire to capture Ratan Singh’s beautiful wife, Padmavati.
Aditi Rao Hydari as Mehrunisa– first wife of Alauddin Khilji and Queen of the Delhi Sultanate.
Jim Sarbh as Malik Kafur– a prominent eunuch slave-general of Alauddin Khilji.
Raza Murad as Jalal-ud-din Khalji – the founder and first Sultan of the Khilji dynasty that ruled the Delhi Sultanate. He was deposed by his nephew and son-in-law Alauddin, who murdered his uncle to usurp the throne.
Anupriya Goenka as Nagmati – first wife and chief queen of Ratan Singh according to Padmavat. Nagmati and her husband’s second wife, Padmavati, performed jauhar together after Alauddin Khilji attacked Chittor.
Ujjwal Chopra as Gora Singh

Be the first to review “Padmaavat Dvd” Cancel reply