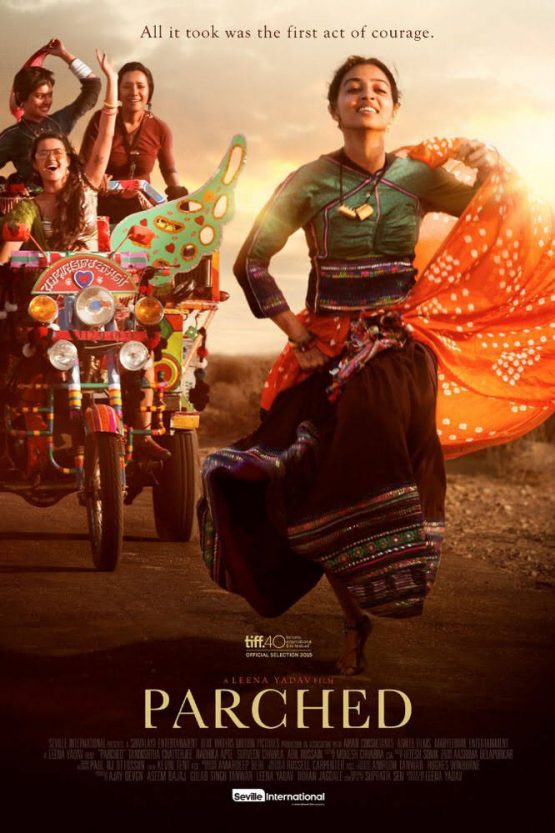 Four women in Gujarat talk about men, sex and life as they struggle with their individual demons.

Parched is a 2015 Indian drama film written and directed by Leena Yadav and produced by Ajay Devgan under his banner Ajay Devgn FFilms. It premiered at the Special Presentations section of the 2015 Toronto International Film Festival. In India, the film released on 23 September 2016.

Parched is the story of four women in a desert village of Rajasthan, India. The village and the society are plagued by several social evils, age-old traditions and practices of patriarchy, child marriage, dowry, marital rapes and physical and mental abuse.

Rani (Tannishtha Chatterjee) is a widow struggling to support her old mother-in-law and teenage son, Gulab (Riddhi Sen). Following village customs, Rani marries Gulab off to a child bride by paying a hefty sum to the bride’s family. Meanwhile, Gulab is disrespectful, rebellious, and prefers to loiter with a gang of friends, spending time with sex workers. Janki (Lehar Khan), the child bride, hopes to stop the marriage by chopping off her hair but is still forced into the relation. Lajjo (Radhika Apte) lives in the same village as Rani, and is a close friend and aid in Rani’s struggles. Lajjo is in an abusive marriage with an alcoholic husband, Manoj (Mahesh Balraj). Having failed to conceive, Lajjo is mocked for being infertile and therefore worthless in the eyes of her husband and society. The fourth woman is Bijli (Surveen Chawla), an erotic dancer in a travelling entertainment company. Bijli acts as an advisor to both Rani and Lajjo.

The movie begins with Rani and Lajjo visiting another village to meet Janki and her family. Meanwhile, Gulab and his friends are seen harassing an educated, working woman, until her husband, Kishan (Sumeet Vyas) approaches. While at Janki’s house, Rani receives calls on a cell phone given to her by Gulab. The anonymous calls started off as a wrong number but has developed into coy flirting.

Later, at the Gram Panchayat, the village participates in solving local issues. The first issue is of a girl named Champa (Sayani Gupta) who ran away from her husband and tried to return to her parents. The Panchayat forces her to return despite her revelation that her husband’s male family members all rape her. Kishan and his wife try intervening but are ridiculed for their progressive opinions. Kishan is a forward thinking local entrepreneur and employs women in the village for craft and handloom jobs. The women reveal at the Panchayat that Kishan has secured a large contract for their handicrafts and so they are prepared to save money for the installation of televisions. The elders reluctantly agree and this angers some men in the village, including Gulab, who resent Kishan for trying to liberate the women.

The conservative and patriarchal village men are seen to be constantly visiting Bijli. She has been increasingly turning down offers for sex work which irks her boss, who threatens to replace her with a new younger girl Rekha (Tanya Sachdeva). Gulab’s unhappy marriage exacerbates his anger issues and poor attitude towards women. Janki is repeatedly beaten and raped by Gulab. After being threatened by a pimp, Gulab and his friends take out their anger on Kishan. First they destroy his handicraft goods, and later on they violently beat him, prompting Kishan and his wife to leave the village.

Frustrated, Bijli picks up Rani, Lajjo and Janki, and visit a local fort. Lajjo realizes that her husband, not her, may be the infertile one. In an experiment, Lajjo has sex with Bijli’s lover (Adil Hussain) and becomes pregnant. Bijli returns to the company to find that her dancing spot has been given to Rekha. She resorts to engaging in traumatic rough sex with multiple men in order to make money.

Rani discovers that Gulab has stolen her last bit of savings and confronts him. He attacks Janki and then angrily walks away, leaving the women to fend for themselves. The next day, Rani sells her house and pays off her debts. She relieves Janki of her marriage, allowing her to reunite with her childhood sweetheart and continue with her studies. Lajjo informs Manoj of her pregnancy and he begins to beat her, implying that he was aware of his infertility. He accidentally falls onto a fire and is severely burnt, while Lajjo watches. Rani, Lajjo and Bijli finally decide to run away from the village in search for a better life, away from all the misery of customs, traditions and patriarchy.

Be the first to review “Parched Dvd” Cancel reply