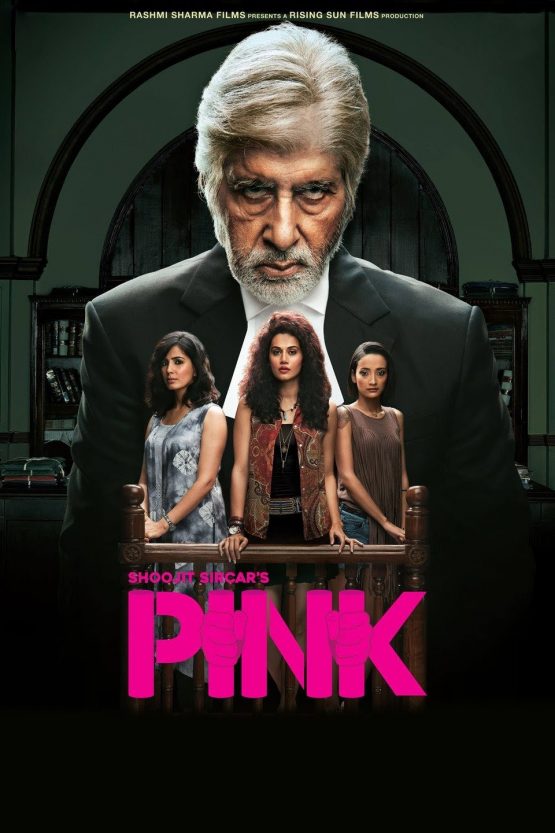 After being molested, Minal, along with her friends, tries to file an FIR against a politician’s nephew. When the subsequent case gets rigged, Deepak, a retired lawyer, helps them to fight the case.

The film was specially screened for the Rajasthan Police so as to train them to be sensitive and sensible about women’s rights and dignity. The film was also specially screened at Rashtrapati Bhavan and invited for a screening at the United Nations headquarters in New York City. On 4 November 2016 the movie completed a 50-day run in theatres.

Three affluent men, Raunak, Vishwajyoti, and Rajveer Singh (Angad Bedi) rush to the nearest hospital because Rajveer is bleeding from a heavy injury to his head. At the same time, three women — Minal (Taapsee Pannu), Falak (Kirti Kulhari) and Andrea — return to their apartment in a taxi. They look disoriented, and it is implied that they have something to do with the incident.

The three women are independent and live together. They try to move on from what happened that night. During Minal’s morning runs, she is observed by an old man in her neighbourhood, Deepak (Amitabh Bachchan), who senses there is something wrong. Threats arise from Rajveer’s friend Ankit (Vijay Varma), who pushes for revenge for the injury Minal caused Rajveer. The threats result in Falak losing her job. They are discouraged from filing a complaint, stating it would make their daily lives more miserable. In reality, the local police are aware that the men are “well-connected” and backed by Rajveer’s uncle Ranjit, an influential politician. Minal goes to a higher-standing police officer and files a complaint.

The next day, she is kidnapped by Rajveer’s friends. Deepak witnesses the incident but is unable to help. Minal is threatened, blackmailed, and molested in the moving car and dropped back home, leaving her shaken. A few days later, she is arrested based on a complaint from Rajveer labeling the women as prostitutes and charging Minal with attempted murder. At this point, Deepak becomes frustrated with the events and introduces himself as a reputable lawyer in retirement. He helps Falak and Andrea with the bail procedures and decides to represent Minal in court.

In the courtroom, Rajveer’s lawyer, Prashant Mehra (Piyush Mishra), presents the following version of events: Rajveer and his friends meet Minal and her friends at a rock concert. They invite the women for dinner at a resort, where they have drinks. The women provoke the men, become intimate, and thereafter demand money, all signs indicating that they are prostitutes. Rajveer refuses to pay and an enraged Minal hits him on the head with a bottle and flees. Prashant’s argument focuses on the poor moral character of the women. He attacks the fact that Minal has family in Delhi but chooses to live alone.

Minal and her friends’ statement is this: The men tried to sexually assault them. Rajveer tried to rape Minal, and she attacked him with the bottle in self-defense. Deepak’s argument focuses on the issue of consent and a woman’s right to say no. A series of chilling courtroom arguments ensues in the following days. Toward the end of the trial, Rajveer becomes enraged and, provoked by Deepak, reveals the truth, stating that the women “got what they deserved”.

Deepak criticizes the regressed views of the society where women are stereotyped as prostitutes if they come home late, move out, want to be independent, drink and so on, but none of these apply to men. He closes with the fact that his client said “NO”. No means no, and does not require further explanation. The women are acquitted while Rajveer, Ankit, and Raunak are charged, with their sentences pending. Vishwajyoti is let off with a warning. The end credits scene reveal what actually happened: the men systematically isolated the women and Rajveer tried to force himself on Minal, who then attacked him with a bottle to his head in self defense.

Be the first to review “Pink Dvd” Cancel reply