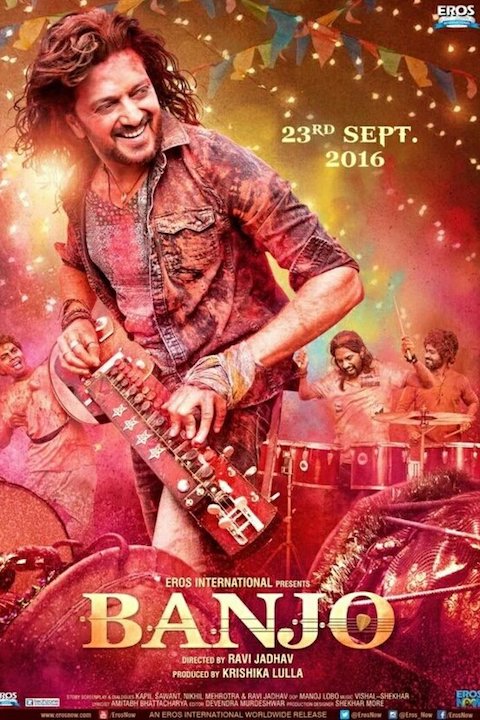 Taraat, a banjoist hailing from a poor background, and his associates get the offer of a lifetime when they are approached by Christina, a musician from the US.

Banjo is a 2016 Indian Hindi-language musical film, directed by Ravi Jadhav and produced by Krishika Lulla under the banner of Eros International. Principal photography began at the end of January 2016 and the film released on 23 September 2016. Riteish Deshmukh and Nargis Fakhri star in the film. The film received mixed reviews upon its release and was declared a flop at the box office.

Mickey (Luke Kenny) is an American, temporarily based in Mumbai, who is in search of an instrumentalist capable of playing the banjo. While trying to contact his music festival aspirant friend Christina (Nargis Fakhri), he comes across a local concert organised by a band of poor friends: 5 of them, led by Taraat (Riteish Deshmukh), who, unknown to Mickey, is the right match for him and Christina to show up at the festival. Christina, upon arrival in Mumbai, is forced to seek out odd jobs and portray Mumbai as dirty, but when, through a local MLA, she meets Taraat, who falls in love with her at first sight, she begins recognising the city as a good place. Taraat is at loggerheads with the leader of an underpaid rival band, who frames him wrongly for the assassination of the MLA who had introduced Taraat to Christina. By that time, in a twist of fate, Christina, while trying to chase the sounds of a banjo being perfectly played, discovers it is Taraat, and convinces him.

Following the assassination, Taraat is disowned by his friends, who accuse him of committing a crime, under what is obviously a false impression. However, when the rival band’s lead musician admits his mistake, the friends get back together. Finally, they are given a chance by popular music baron Shamin Nair (Mohan Kapoor). However, shortly after Christina returns to the States, Nair humiliates Taraat, who threatens Nair and dares him to steal the show. When the band makes an entry, Nair is convinced of the band’s power as it plays a sway-away song based around Lord Ganesha. Finally, after Mickey sends a recording of the song to Christina, Taraat is contacted by her to come to the US for attending the festival.

Be the first to review “Banjo Dvd” Cancel reply