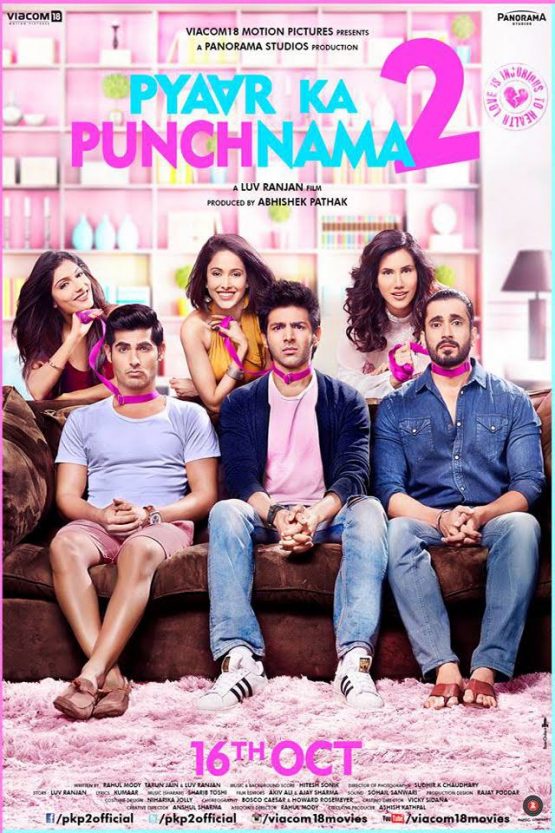 Anshul, Siddharth and Tarun each fall in love at the same time with different women. However, their relationships soon turn toxic and make them realise the dark side of love.

Three bachelors — Anshul a.k.a. Gogo (Kartik Aaryan), Siddharth a.k.a. Chauka (Sunny Nijar) and Tarun a.k.a. Thakur (Omkar Kapoor) are flatmates and best friends. Later they all find their girlfriends: Gogo meets Ruchika a.k.a. Chiku (Nushrat Bharucha) and gives her his number. Siddharth meets Supriya (Sonnalli Seygall) at a family wedding and instantly falls for her. Thakur meets Kusum (Ishita Raj Sharma) while working out at the gym and they start seeing each other.

Apart from that those three girls don’t like each other, each of the three love stories has its own problem. Chiku gets too close with her best friend Sunny, male, as close as they live together and can even sleep in one bed. Supriya doesn’t have the guts to tell her parents about Siddharth. She introduce Sidharth as her normal friend to her parents. Her father, who thinks she should get married but still has no boyfriend, looks for mate for her on Internet, and even asks Siddharth to help him finding groom for Supriya, which annoys Siddharth a lot. Kusum is too cautious about money: she insists everyone, despite of relationship with another, should only spends his own money. She even stops Thakur from paying the bill for dinner with his friends, but makes sure that Thakur spends High amounts of money on her.

The three boys tired to solve the issues in their own love stories, and their girlfriends also appear to be willing to help solve those problems. Chiku drives Sunny out of her house; Supriya finally tells her father that she loves Siddharth and wants to marry him, but gets firmly rejected; Kusum also agrees not to care that much about money.

Despite the effort of the three boys and the three girls, the problems remain: after Chiku drives Sunny out of her house, Gogo accidentally hears her flatmates telling her that she should break up with Gogo and be in love with Sunny, as they all think she and Sunny are real in love; Supriya runs away from home and meets Siddharth and spends the night with him. Her father arrives there the next morning with police. He accuses Siddharth of taking Supriya away from her house against her will. Supriya, who always does not have the guts to oppose her father, supports her father’s claim and testifies against Siddharth. Thakur resigns and starts his own website, encouraged by Kusum. However, Kusum refuse to financially support Thakur’s plan even if it will benefit the both if it succeeds.

Finally, the three boys all give up their love for feeling desperate. Gogo breaks up with Chiku by keeping saying “I love you” and he says he learns from her that those three words are cheapest words. Siddharth breaks up with Supriya in police station right after she testifies against him. Thakur breaks up with Kusum and tells her she should return over Rs 8 Lakhs approx that he spent on her, according to her life rules that she doesn’t like taking favours from anyone.