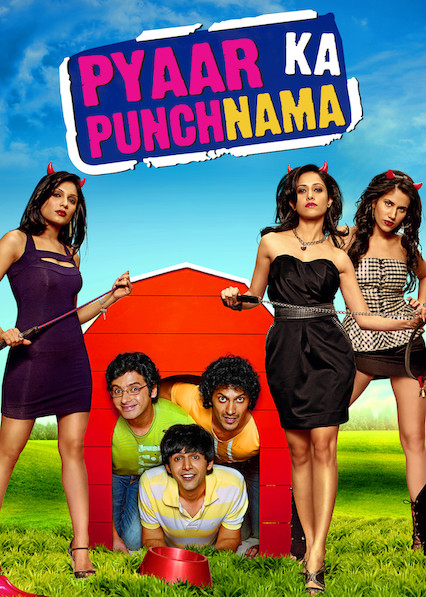 Outspoken and overly critical Nishant Agarwal meets gorgeous new co-worker, Charu, offers his help, assists her financially, and they become close friends. His room-mates, Rajat and Vikrant, are pleased with this outcome as they already have girlfriends in Neha and Rhea respectively. But both the relationships are not as harmonious, as Rajat feels Neha is self-centered and demanding, while Rhea appears to be withdrawn and aloof. Missing their meetings and bar-hopping, the trio decide to take a time-out and be by themselves. All three women, however, find out and decide to accompany them to the beach where they eventually mingle. The trio do not know that soon misunderstandings will crop up – and it will take a lot of effort and understanding to resolve them.

Pyaar Ka Punchnama (transl. ’Case file of love) is a 2011 Indian Hindi romantic comedy film, directed by Luv Ranjan. The film stars Kartik Aaryan, Divyendu Sharma, Raayo S. Bakhirta, Nushrat Bharucha, Sonnalli Seygall and Ishita Raj Sharma. It is the story of three working bachelors who find girls whom they fall in love with and the twists and turns of the newly developing love stories. It grossed ₹175 million (US$2.5 million) at the box office, satellite rights and DVD against a budget of ₹100 million (US$1.4 million).

Rajat falls in love with Neha (Nushrat Bharucha). Nishant falls for Charu (Ishita Raj Sharma) who is his colleague. She makes him do a good part of her work in an office and makes him foot her beauty parlor bills. He is too naïve to understand that she is only using him for financial assistance and moral support. Charu has a boyfriend, Abhi, but they aren’t on the best of terms. Vikrant loves Rhea (Sonalli Sehgall) who can’t get over her boyfriend of five years, Varun.

Rajat leaves the bachelor pad. Vikrant, however, is aware of Varun and knows that Rhea has not yet called off that relationship but he doesn’t mind waiting because he is besotted. On her part, Rhea keeps assuring him that she will end the relationship but ends up sleeping with Varun while she is dating Vikrant.

Missing their meetings and bar-hopping, the trio decides to take a time-out by themselves. All three women, however, find out and decide to accompany them to the beach where they eventually mingle. Charu here kisses Nishant, while Rajat has a fight with Neha back at home. Charu starts to ignore Nishant and ends up eventually insulting him openly at work. Rajat and Neha eventually work out their differences but, soon after, further problems arise between them (such as Neha’s constant tantrums). Rajat becomes so frustrated that he walks out on Neha, telling her that she is ‘not worthy’ of him. Nishant goes into depression but is brought back to reality by his two friends Vikrant and Rajat who drive him to Charu’s house. Nishant slaps Charu’s boyfriend. Vikrant finds out that Rhea slept with her ex and leaves her.

In the end, the trio is seen sitting together, laughing and feeling happy with the moment they have with each other. In the end credits, the three women whom the trio fell for are shown having new boyfriends.