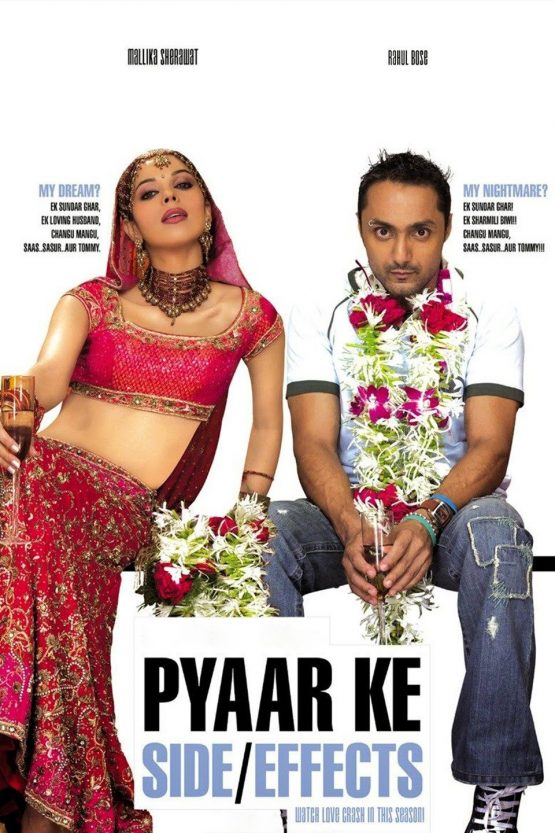 Sid, a commitment-phobe, agrees to marry his girlfriend, Trisha. However, while negotiating other problems, they face a major hurdle when Trisha’s father takes a dislike towards Sid.

Pyaar Ke Side Effects (English: The Side Effects of Love) is a 2006 Indian Hindi romantic comedy film. It was produced under the banner of Pritish Nandy communications and was written and directed by first time director Saket Chaudhary. Mallika Sherawat and Rahul Bose played the lead cast. The film is a romantic comedy, and portrays the intricacies of a modern relationship. The film explores the theme of ‘commitment phobia’ in a captivating manner, an interesting, witty take on men-women relationships. After the success of this movie the lead pair were repeated in another movie Maan Gaye Mughal-e-Azam however that movie couldn’t match the success of this movie. A sequel, Shaadi Ke Side Effects, was released in 2014 with Vidya Balan and Farhan Akhtar in the lead roles.

Sid (Rahul Bose) is a short, thirtyish DJ, who finds himself playing music at Trisha’s (Mallika Sherawat’s) marriage to Vivek (Jas Arora) in Delhi. However, he witnesses her fight her sense of responsibility and duty towards her parents and the groom, and runs away.

Six months later, he meets her again at a DJ competition in Mumbai, which he has just lost, yet again. Before you know it, they’re in a relationship, and three years have passed. Trisha thinks she is ready for marriage, and gets down on her knee to propose to Sid. Sid suffering from the typical commitment phobia, is at a loss for a reasonable answer. In a bid to not lose her, Sid finds himself engaged.

But along with the engagement comes a new set of problems – such as shopping for furniture for their home, engagement rings, and more importantly facing the father of the bride (Sharat Saxena)! The father has more than one problem with Sid. He doesn’t have a future, he earns a lot less than Trisha, and he doesn’t seem responsible enough. Over an altercation Sid has with Trisha’s father, the couple break up. Vivek is waiting in the wings, to help mend her broken heart. Sid on the other hand, finds himself being wooed by item girl, Tanya (Sophie Choudhary), star of the ‘Baby Girl vol. 3’ video.

After a few amusing run-ins, an attempt to be just-friends, and a sad-song (“Jaane Kya” sung by Zubin), Sid, finally realizes, thanks to his mother, that his commitment phobia is the result of a childhood scar. His father abandoned Sid and his mother, when Sid was very young. His mother reassures him, that he is nothing like his father, and would make a great husband. But it’s too late, Trisha has already agreed to marry Vivek. This leads him to Trisha’s dear friend Anjali (Suchitra Pillai), who reminds him of Dracula because she always attacks him, for making Trisha unhappy. She helps him crash Trisha’s wedding party.

The climax builds up, as Sid’s job involves not just convincing Trisha that his hang-ups have abated, but also avoid a deadly confrontation with Trisha’s father.