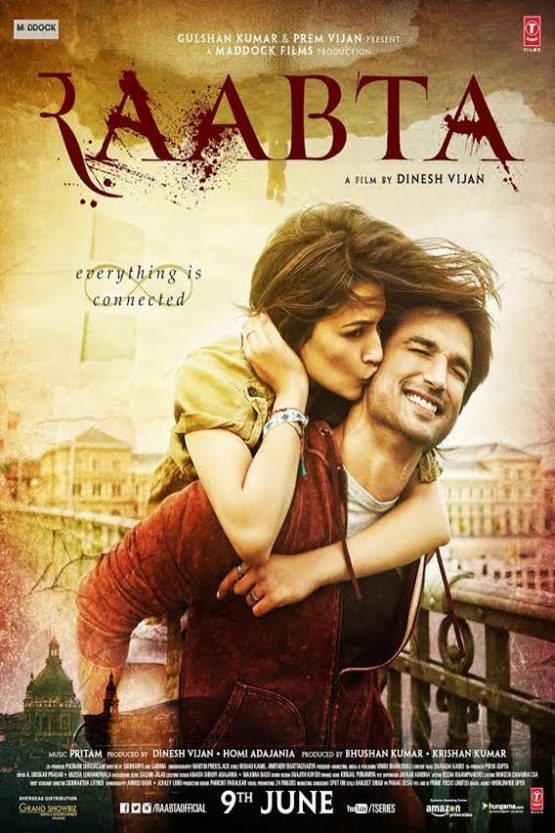 Shiv and Saira fall in love with each other and soon become inseparable. Their relationship is put to the test when Saira’s reincarnated lover from her past life returns.

Raabta (transl. Connection) is a 2017 Indian Hindi-language action-romance film directed by Dinesh Vijan in his directorial debut and co-produced by Vijan, Homi Adajania, Bhushan Kumar. It stars Late Sushant Singh Rajput and Kriti Sanon, with Jim Sarbh, Rajkummar Rao and Varun Sharma in supporting roles. The story is based on the concept of reincarnated star-crossed lovers.

The film had faced controversy from producer Allu Aravind of Geetha Arts, who claimed that the film’s storyline and characters strongly resembled those of the studio’s 2009 film Magadheera. The film released on 9 June 2017.

Shiv Kakkar(Sushant Singh Rajput) is a banker from Amritsar who gets a lucrative opportunity to work in Budapest. He is a fun-loving playboy back home and continues this behaviour in Budapest. Saira Singh(Kriti Sanon) is a young woman haunted by mysterious nightmares of drowning to death. She lives by herself in Budapest and works as a chocolatier. Shiv happens to stumble upon Saira’s shop while on a date with a woman, but finds himself deeply attracted to Saira. Shocked by the weird connect she feels with Shiv, Saira initially rejects his advances, but eventually succumbs and falls for him. The next day, Saira reveals that she has never felt such a connection before but is in a mess as she has a boyfriend. Unwilling to let go of their connection, Shiv interrupts Saira’s date with her boyfriend Manav and shows her that she would rather be with him than with her boyfriend. Manav breaks up with her, and Shiv and Saira start spending time together, growing close. One night, they go to a club where Saira tearfully reveals to Shiv that she has a fear of water because her parents drowned after a car accident when she was two years old. Shiv and Saira try to test their hearts connection by trying to flirt with people of opposite gender in a fest, where Saira ends up meeting a young businessman Zack Merchant(Jim Sarbh). While trying to test their love a final time, Shiv and Saira make a pact when he reveals he has to leave for a business trip for a week. They decide to see how they feel after a week’s separation. During Shiv’s absence, Saira gets to know Zakir “Zack” Merchant(Jim Sarbh) and confides in him about her nightmares. During one of their dinners, Zakir drugs Saira and kidnaps her.

Saira wakes up and finds herself trapped in Zakir’s isolated mansion on an island off the coast. She demands him to let her go, but he refuses, saying that he spent his whole life looking for her. He explains that he was madly in love with her in a previous life but his love remained unrequited. He refuses to let go of her again. When she does not believe him, he shows her a collection of uncannily accurate paintings he made of her at various ages and says she will find the explanation for her nightmares. Thinking he is crazy, she attempts to escape but ends up falling into the ocean, which triggers the memories of her previous life.

Eight hundred years ago, Saira was warrior princess Saiba. She had a childhood best friend Qaabir, a fellow warrior from her tribe who was in love with her. Their kingdom was threatened by the Muraakis, led by a wise, old Rajput ruler Muwwaqqil. Qaabir is severely wounded by the fierce warrior Jilaan, who gives Qaabir an ultimatum to surrender. Saiba challenges Jilaan, and they find themselves attracted to each other. Saiba accepts defeat, surrendering the kingdom to the Muraakis and herself to Jilaan. Qaabir attempts to take Saiba back, but she reveals that she and Jilaan are in love. On their wedding night, a comet falls and Muwwaqqil realizes that this will be a fateful night. Qaabir ambushes Jilaan and Saiba, and murders Jilaan by wounding him and throws him in the ocean. Saiba jumps into the ocean to save him, but to no avail. Heartbroken on seeing Jilaan die, Saiba decides to drown too. On seeing Saiba dead, Qaabir slits his own throat, killing himself. Muwwaqqil forebodes that these events will repeat.

This time around, when Shiv shows up, Saira decides to fight back against Zakir. When their previous lives’ events repeat, Zakir throwing Shiv into the ocean, Shiv drags Zakir down with him and Zakir dies. Saira jumps into the water and is able to save Shiv.

Saira and Shiv reunite, marry and have twin sons and the film ends on a happy note.

Be the first to review “Raabta Dvd” Cancel reply