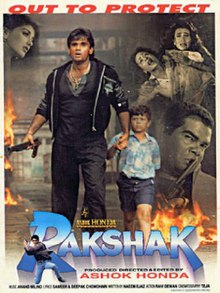 ASP Raj Sinha is assigned to nab the criminal responsible for printing and circulating fake currency notes. However, he is in for a rude shock when he learns that the criminal is his childhood friend.

Raghavan, alias Raghu (Raghuvaran) has been ignored and demeaned all his life. He decides to teach the world a lesson, by printing the best ever fake currency notes. This does get him some conditional recognition by a gangster named Bardha (Pramod Moutho). But Raghavan’s goal is much higher than getting some recognition, and his plans materialize when he is able to get Bardha killed, and takes over as the unchallenged leader of the underworld. Raghavan decides to put a temporary halt to all criminal operations when he comes to know that his brother-in-law, Asst. Superintendent of Police, Raj Sinha (Sunil Shetty), along with his wife, Suman (Karisma Kapoor), her mother (Aruna Irani), and his young son, Bunty, are coming for a visit. Raghavan’s instructions are not followed, and Raj realizes that Raghavan is the head of the crime syndicate. Raghavan then decides to use his position and abducts Suman, her mother, and Bunty, and uses them as a shield against Raj. But Raj is bent upon capturing Raghavan by any means possible, and as a result, Suman and her mother are killed. Now the only one left alive from the Sinha family is Bunty, but if Raj continues to pursue Raghavan, it does not look like Bunty will be alive for very long. Raj’s revenge against Raghavan forms the crux of the film.

Be the first to review “Rakshak Dvd” Cancel reply