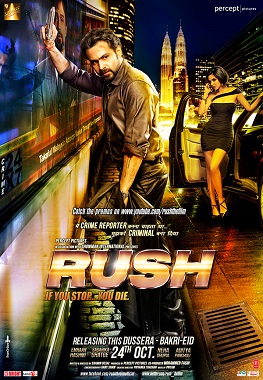 Despite the popularity of his talk show, Samar faces crises in his bond with his wife. He agrees to execute an assignment presented by a media mogul, but a deadly whirlpool engulfs him.

Rush is a 2012 Indian Hindi-language crime thriller film directed by Shamin Desai. The film features Emraan Hashmi, Aditya Pancholi, Neha Dhupia and Sagarika Ghatge. The storyline is based on media and crime. The film released on 26 October 2012 on Dussehra. After the death of director Desai, the film was completed by his wife Priyanka Desai. It generally received negative response from critics and was declared a disaster at box-office.

The story follows media, politics, crime and sex at the point of life and death. Samar Grover (Emraan Hashmi) is a struggling news reporter. Even though his talk show is at the pinnacle of success, his personal life has turned upside down due to problems with his wife (Sagarika Ghatge). Seeing no way out, he accepts an assignment offered by a dynamic media tycoon named Lisa (Neha Dhupia), which he believes can make him millions. However, along with Lisa, one of India’s most richest man, Roger Khanna (Aditya Pancholi), together play a game on Samar, which plunges him into a vortex of violence in a deadly game of cat and mouse. Beneath the veneer of glamour, money, power and the enviable life of media, lays a truth that is at once unbelievable and shocking.

Be the first to review “Rush Dvd” Cancel reply