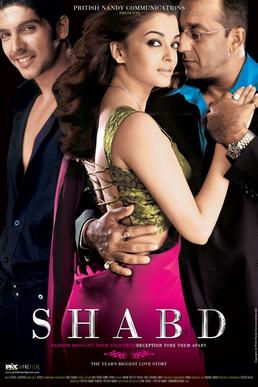 Shaukat, a Booker Prize-winning author, suffers from a writer’s block, which disappoints his publishers. So, he decides to write a new book revolving around a character based on his wife, Antara.

Shabd (transl. Word) is a 2005 Indian Hindi-language thriller drama film produced by Pritish Nandy Communications, and directed by Leena Yadav. It stars Sanjay Dutt, Aishwarya Rai and Zayed Khan. The film got good reviews but only managed average collections at the box office.

Author Shaukat Vashisht (Sanjay Dutt) lives a wealthy life-style in India with his wife, Antra (Aishwarya Rai), who is a College Teacher. Shaukat achieves fame when he is nominated for the Booker prize, and goes on to win it. His publishers, hoping that they have unleashed a goldmine, are disappointed with his subsequent works, and soon Shaukat is depressed to such an extent that he almost gives up writing. Then he decides to write a story on a woman named Tamanna, and figures that he will base this story on none other than Antara herself. For this purpose he starts to make note of her every movement, and it is then that he finds out that she has an admirer in fellow-teacher, Yash Agnihotri (Zayed Khan), a dashing young man – with a bright future ahead of him. Shaukat also finds out that Antara has never mentioned Yash to him, nor has she informed Yash that she is married.

He decides to manufacture a realistic story by making Antara hide her marital status from Yash and pursue a relationship with him. Things go wrong as Antara begins to have real feelings for Yash. (She still loves Shaukat though.)

Whatever Shaukat pens turns out to be true. He starts to believe he can change Antara’s and Yash’s fate by his writings, and writes according to his logic that Yash would commit suicide after getting to know Antara’s reality. However, Antara soon comes to know of this. She lies to Shaukat that Yash really committed suicide in order to disillusion Shaukat. Shaukat, out of guilt, becomes schizophrenic. The film ends on a disturbing note: Antara sends Shaukat to an asylum, due to his schizophrenia.

Be the first to review “Shabd Dvd” Cancel reply