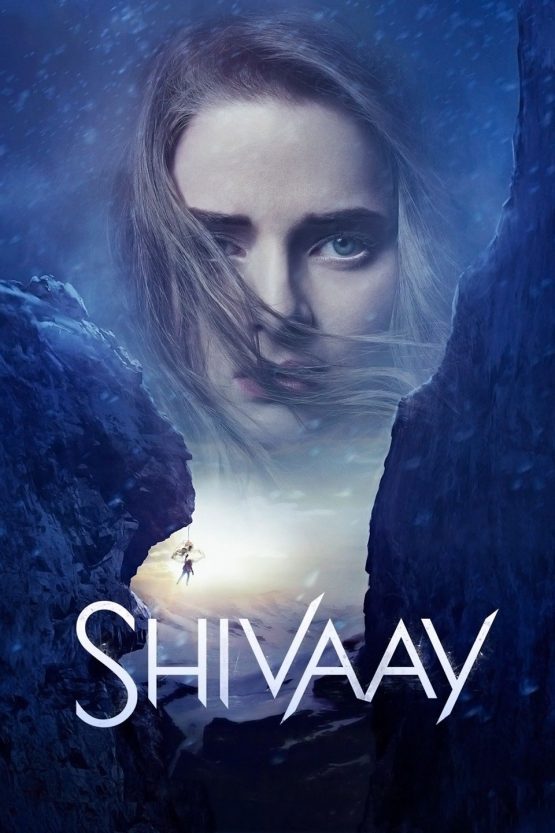 To unite his daughter, Gaura, with her Bulgarian mother, Olga, Shivaay travels overseas. On the way, a child trafficker kidnaps Gaura, causing Shivaay to chase him.

Shivaay is a 2016 Indian Hindi-language action thriller film directed and produced by Ajay Devgn under his banner Ajay Devgn FFilms. The story and screenplay are written by Sandeep Shrivastava and the film features Ajay Devgn in the lead titular role along with debutante actresses Sayyeshaa, Abigail Eames and Erika Kaar in lead roles. Mithoon composed the film’s score and soundtrack. British band The Vamps and composer Jasleen Royal also contributed to the music.

Shivaay was released on 28 October 2016 on the Diwali weekend. It ran for more than 50 days at the box office. It won the 64th National Film Award for Best Special Effects in 2017. It was screened at the 2017 Shanghai International Film Festival on 17 June 2017.

Shivaay (Ajay Devgn) is a skilled mountaineer who makes a living by providing treks and climbing expeditions to tourists. One day he meets Olga (Erika Kaar) and saves her from an avalanche. They eventually fall in love. Olga becomes pregnant but doesn’t want the child. Shivaay begs her to give him the child after which he will not stop her. Nine years later, Shivaay leads a happy life with his mute daughter Gaura (Abigail Eames) until she discovers that Olga is still alive and in Bulgaria. Gaura insists Shivaay be taken to Bulgaria and despite his old sorrows, Shivaay finally agrees to take her to Bulgaria, where he saves one young child from child traffickers. Shivaay seeks the Indian embassy’s help in tracing Olga and is assigned to Anu (Sayyesha Saigal).

The traffickers, led by the baron Ustinov and his right-hand man, the unseen Changez, come after Shivaay and kidnap Gaura. Shivaay chases the van, destroying various cars but loses the van and is arrested by the Bulgarian police, charged with murder and trafficking. While in the police van, Shivaay imagines the officers in the van to be the same masked traffickers, attacks them, throwing out every single officer. The van accidentally falls off a dam, and the police think that Shivaay is dead. But Shivaay escapes by jumping from the van due to his skills and survives.

Shivaay brings one of the saved prostitutes from a brothel to Anu’s home to help her out. Anu, who misunderstood Shivaay earlier, agrees to help him. Olga, having now seen television coverage of Shivaay, meets him and joins him. They seek Wahab (Vir Das) help to recover CCTV footage Shivaay’s various chases. Ivanovich, Ustinov’s henchman, is beaten badly when he arrives there, after which he reveals Ustinov’s location, where Shivaay discovers that Gaura has been taken away to be sold into the flesh trade.

Shivaay chases after the transport van carrying his daughter off to Romania. A prolonged and vicious fight ensues as Changez, now revealed to be Captain Nikolai of the Bulgarian Police, attacks Shivaay but gets killed by the latter. Gaura is reunited with Olga who is now married to a wealthy Bulgarian and can provide Gaura with every comfort. Shivaay doesn’t want to lose Gaura, but, seeing as Olga now beseeches him, he heavy-heartedly leaves for the airport, where Gaura arrives & requesting not to leave her, runs into his arms.

Ajay Devgn as Shivaay, a tourist guide and mountaineer
Sayyeshaa as Anushka, a budding IFS officer at the Indian embassy in Sofia, Bulgaria
Erika Kaar as Olga, Shivaay’s former lover and the mother of Gaura
Abigail Eames as Gaura (Maharishi Gaura), Shivaay’s young daughter with his former lover, Olga
Vir Das as Wahab, an expert computer hacker who has a crush on Anushka
Girish Karnad as Anushka’s father
Markus Ertelt as Changez/Sgt. Nikolai
Saurabh Shukla as Anushka’s boss in the Indian embassy in Sofia, Bulgaria
Bijou Thaangjam as Kancha, Shivaay’s friend

Be the first to review “Shivaay Dvd” Cancel reply