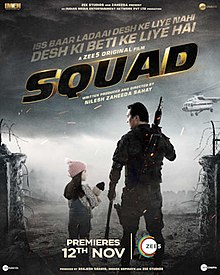 In the course of an action-packed battle royal of elite military forces, a small child forms an emotional bond with the reluctant guardian sent to protect her.

Squad is a 2021 Indian Hindi-language Action film written, directed and produced by Nilesh Sahay. It is also produced by Brajesh Sahaya, Mohan gopinath, and Zee Cinema. Shobha Nihalani co-wrote the screenplay along with Nilesh Sahay. Rinzing Denzongpa, Pooja Batra and Malvika Raaj in lead roles. The film premiered on ZEE5 on 12 November 2021.

Squad is the first Indian film to be shot in Belarus. Principal photography of the film commenced on 23 September 2019 at Belarusfilm studios in Minsk.

The film centres around an elite STF squad tasked with the responsibility of protecting the granddaughter of a scientist who possesses blueprint of a lethal cyborg programme.

Plot
This article needs an improved plot summary. You can provide one by editing this article. (November 2021)
Squad centres around a battle royal of Special Forces with an emotional relationship at its core, between Bhim, a MARCOS commando turned deserter, and Mimi, an orphaned 6-year-old child who knows nothing about her life or family. The only thing they have in common is their loneliness in the world.

Be the first to review “Squad DVD” Cancel reply