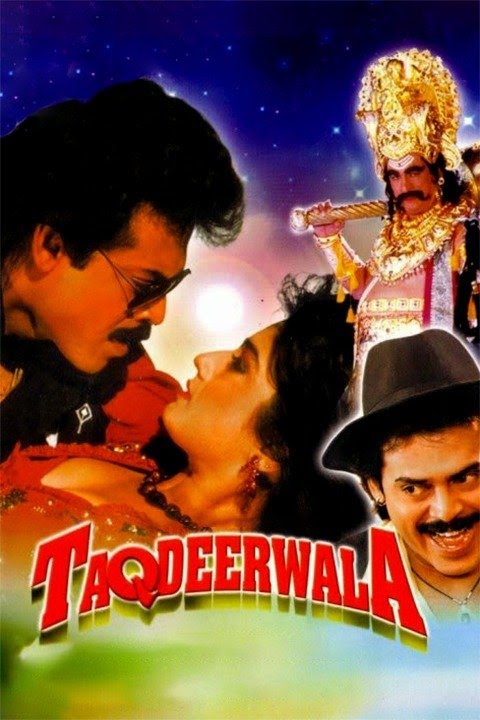 When a book on destiny gets misplaced, Yamraj and Chitragupt descend to Earth to look for it. They find it in the hands of a man unwilling to part with it.

Taqdeerwala (transl. A Man With Awesome Fate) is a 1995 Indian Hindi fantasy action comedy film produced by D. Rama Naidu under the Suresh Productions banner, directed by K. Murali Mohana Rao. It stars Venkatesh, Raveena Tandon in lead roles, with music composed by Anand–Milind. It is a remake of the 1994 Telugu film Yamaleela. The movie became a moderate box office success and was declared “Average” by Box Office India. This is Telugu actor Venkatesh’s second and final Hindi film to date after Anari (1993).

Suraj (Venkatesh) is a mischievous guy and his mother (Reema Lagoo) is disappointed with his behavior. Suraj comes to know about his mother’s past, his father (D. Ramanaidu) is a Zamindar and owner of a palace called Swarna Palace, who died because of debts and they lost their entire property. Suraj swears on his mother to again buy their palace in any circumstances and make his mother happy. Lilly (Raveena Tandon) is a petty thief, a very greedy woman and Suraj falls in love with her at first sight, but she turns him down. Chota Ravan (Shakti Kapoor), a rowdy opponent to Lilly, teases Suraj a lot and he falls sick.

Meanwhile, in hell, Yamraj (Kader Khan) (God of death) and Chitragupt (Asrani) misplace a book called Bhavishyavaani, which shows the future of man. The book somehow falls on the roof of Suraj’s house, he benefits a lot by reading predictions of the future in the book and becomes rich and Chota Ravan is surprised how Suraj became rich in a short time. Lord Brahma warns Yamraj and Chitragupt that within one month they should find the book, otherwise they lose their supernatural powers. On earth, Suraj again buys their palace and takes his mother to it and he asks his mother if she wants anything else. She asks him to get married, so Suraj again opens the book to see whether his marriage will happen with Lilly or not. He then reads that his mother will die that night at 10 PM. To fulfill his mother’s last wish, Suraj plays a marriage drama with Lilly, but accidentally his mother does not die and Lilly reveals all this drama which leads to his mother’s anger and she stops talking to him until he really brings back Lilly as her daughter-in-law.

Meanwhile, Yamraj and Chitragupt reach earth in search of the book. As they reach earth, they face a lot of problems as everyone thinks of them as some drama company artists. Suraj saves them once and realizes that they are the real Yamraaj and Chitragupt and his mother didn’t die because they do not have the book. To protect his mother, Suraj traps Yamraj with the help of a girl Lata (Tisca Chopra). After some time, Yamraj gets to know the truth and also understands that the book is with Suraj. Yamraj asks him to give back the book, but he refuses. From that day, they try for the book in many ways, but fail. One day Chota Ravan beats Suraj very badly for the secret behind his success, but he doesn’t reveal it. Yamraj saves him by calling Bruce Lee’s soul into Suraj’s body and asks him why all this. He says for his mother’s sake, then Yamraj understands his devotion towards her. Yamraj wants to meet her, Suraj invites them to his house without knowing their real faces and accidentally Yamraj blesses Suraj’s mother for complete life.

Meanwhile, Chota Ravan wants to know the secret behind Suraj’s success, and he asks Lilly to go and find out the secret. Lilly plays a love drama with Suraj and asks him the secret, he refuses to reveal it, she finally says he has to make a choice of her or his mother, then without any hesitation he chooses his mother and throws her out, then she understands his affection towards his mother and his love towards her. Finally, Chota Ravan kidnaps Suraj’s mother and blackmails him for the book. Yamraj takes advantage of the situation and Suraj gives the book to Chota Ravan. Yamraj destroys him and collects the book. Finally, Yamraj comes to take Suraj mother’s life, but she has complete life because of his blessings.

Be the first to review “Taqdeerwala Dvd” Cancel reply