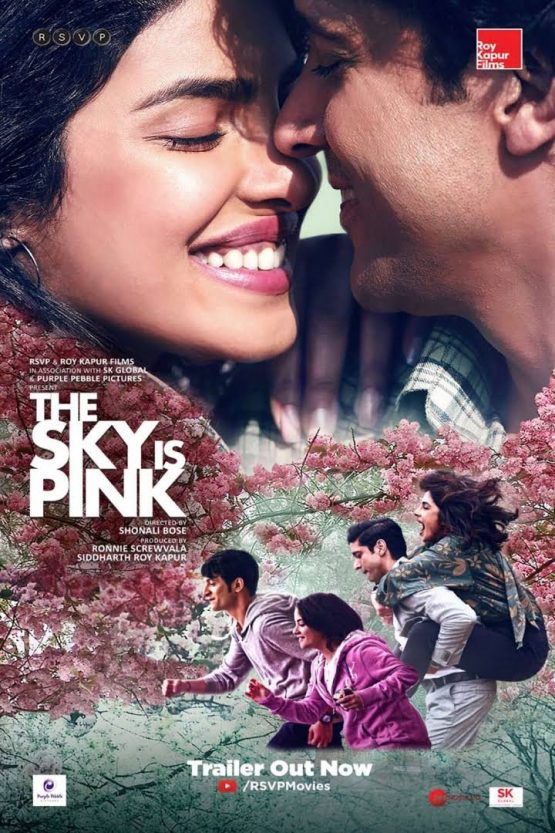 The Sky Is Pink Dvd

Based on the life of motivational speaker Aisha Chaudhary, who died in 2015 when she was 18. Aisha tells the love story of her parents over a period of 25 years.

The Sky Is Pink is a 2019 Indian Hindi-language biographical comedy-drama film written and directed by Shonali Bose. It was co-produced by Siddharth Roy Kapur, Ronnie Screwvala and Priyanka Chopra Jonas under their production companies Roy Kapur Films, RSVP Movies, and Purple Pebble Pictures, respectively, in association with Ivanhoe Pictures. The film stars Chopra Jonas, Farhan Akhtar, Zaira Wasim and Rohit Suresh Saraf. It is based on the true story of Aisha Chaudhary, who suffered from severe combined immunodeficiency and pulmonary fibrosis, and tells the story of her parents Aditi and Niren as they navigate their marriage while dealing with their daughter’s illness.

Aditi Chaudhary approached Bose to make a film based on her daughter’s life story. Although intrigued by the story, Bose instead chose to depict the parents’ story from Aisha’s point of view by incorporating first-person narrative, focusing on their marriage and the effect of their child’s illness on their lives and relationship. Bose wrote the screenplay based on the details she gathered through interviewing both of her parents. Nilesh Maniyar wrote the additional screenplay while Juhi Chaturvedi wrote the Hindi dialogue. Principal photography took place in Mumbai, London, Delhi and the Andaman Islands. The film’s soundtrack was composed by Pritam while Gulzar wrote the lyrics for the songs. The film explores themes such as death and its acceptance, motherhood, grief and the effect of the loss of a child on relationships, particularly on the parents’ companionship.

The film premiered at the 44th Toronto International Film Festival on 13 September 2019 and was released worldwide on 11 October the same year. The Sky Is Pink received generally positive reviews, with praise for Bose’s writing and direction, and the actors’ performances. It did not perform well commercially, grossing ₹34.41 crore at the box office against a budget of ₹24 crore. The film received three Filmfare Awards nominations: Best Film (Critics), Best Actress for Chopra Jonas and Best Supporting Actress for Wasim.

Aisha Chaudhary narrates the story of her parents Moose (her mother) and Panda (her father) from the afterlife. Aditi Chaudhary and Niren are a young couple who come from different backgrounds; Aditi is from a salubrious suburb in South Delhi whereas Niren is from a grounded middle-class family. The couple are in love and have “an active sex life”, according to Aisha’s narration. The couple get married and Aditi becomes pregnant with their first child Tanya Chaudhary, who dies within months of her birth due to the severe combined immunodeficiency condition. Baby Tanya was frequently ill and, while Aditi was convinced it was a serious issue, Niren dismissed it as trivial. Niren believed negligence was the reason Tanya could not be treated sooner and blamed himself for the death of his child. As Aditi mourned the death of her child, she was consoled by a Catholic nun and decided to be baptized.

Aditi and Niren have a second child named Ishaan. A few years later, Aditi bore their third child, a girl named Aisha. They later learn Aisha has the same medical condition as their first child and are heartbroken. After the doctors in Delhi give up on Aisha’s treatment, the couple go to London where they learn the disease could be treated with a very costly bone marrow transplant. Niren starts working to earn the money while also asking for crowdfunding via a radio station. After several weeks, they learn several people have donated money for Aisha’s treatment. The surgery is successful but Aisha is kept under doctor’s watch. Aditi decides to stay in London while Niren returns to India with his family and his son Ishaan. Aditi grows overprotective of Aisha, cleaning the apartment and other items to keep Aisha away from any infection.

Ishaan starts missing his mother while Niren is always thinking about Aditi and Aisha. This also starts affecting Aditi and Niren’s relationship as Aditi is always occupied with Aisha and taking care of her. Months go by and Niren goes to London and asks Aditi to move back to India so that their relationship is not affected. He reasons with Aditi on the grounds that Aisha had gotten better and occasional doctor’s visit can be done in India as well. Aditi tells him that they have to live here for a very long time as per doctor’s recommendation till Aisha’s condition is cured. The whole family moves here permanently till Aisha is cured. Niren’s career grows in London and he becomes rich and their family becomes affluent.

Several years later, Aisha has recovered from her illness, and Niren and Aditi decide to move back to India. They move to the outskirts of Delhi and buy a large, opulent bungalow. After a doctor’s visit, Aisha is diagnosed with pulmonary fibrosis, a side-effect of the chemotherapy she underwent. With Aisha’s life shortened, Aditi sets out to fulfill all of Aisha’s dreams such as adopting a pet, seeing aquatic life and writing a book. As Aisha’s condition worsens, Aditi grows increasingly overprotective and stressed, and suffers a psychotic breakdown and is hospitalized. Aditi does everything in her power to ensure Aisha gets to see the first copy of her book before she dies.

After the death of Aisha, Aditi and Niren’s relationship is strained. While living together, they grow apart and are constantly fighting with each other. Aditi is unable to accept Aisha’s death and constantly brings her in their fights. At a party, Niren shows Aisha’s private video she made about her parents. Niren wants Aditi to move with him to London so she can forget Aisha; Aditi finds this insulting—she does not want to let Aisha’s memories fade, particularly the house. Niren is angry and leaves for London while Aditi stays in India. Aditi later goes to meet Niren in London and they reconcile with keeping the memories of Aisha.

The cast has been listed below: