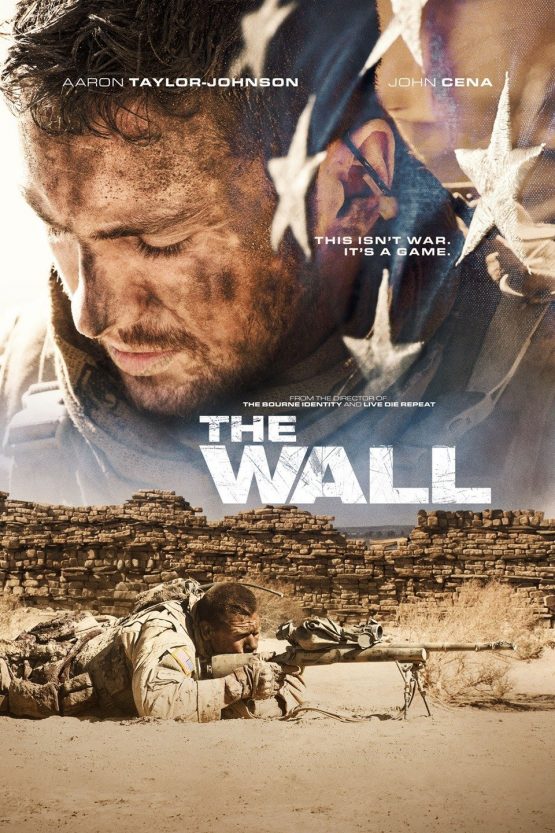 U.S. soldiers Allan “Ize” Isaac and Shane Matthews answer a distress call in the desert of postwar Iraq. Suddenly, gunshots erupt, leaving Shane badly injured and Allan with a bullet in his leg. Forced to take cover behind a crumbling stone wall, Isaac now finds himself in a fight for survival against an unseen sniper who has all of the advantages.

The Wall is a 2017 American war thriller film directed by Doug Liman and written by Dwain Worrell. The film follows two American soldiers (Aaron Taylor-Johnson and John Cena) trapped by an Iraqi sniper. Produced by Amazon Studios, it was released on May 12, 2017 by Roadside Attractions. The film received mixed reviews from critics and grossed $4.5 million against a $3 million budget.

At the close of the Iraq War, U.S. Army Staff Sergeant Shane Matthews (John Cena) is a sniper who is sent to investigate a pipeline construction site in the desert of the country, with his spotter, Sergeant Allen Isaac (Aaron Taylor-Johnson).

The pair patiently wait 22 hours on overwatch before determining that the site is clear. Matthews proceeds to investigate the site, but is shot by famed Iraqi sniper nicknamed “Juba.”Isaac tries to rescue the dying Matthews, but he is also wounded in the right knee and has his radio damaged and his water bottle destroyed in the process.

Alone, Isaac takes cover behind an unsteady wall and tends to his wounds. The sniper has a radio tuned into the American channel, and uses it to communicate with Isaac under the pretense of being a high ranking allied soldier at another site. The deception allows the sniper to get other useful information from Isaac. Throughout their various one-sided attempts at conversation, we learn that the sniper does not claim to be the mythical Juba mentioned earlier in the film, a nom de guerre for various Al Qaeda snipers notorious for filming their attacks on American soldiers.

Isaac’s attempts to call headquarters for help are stymied by the loss of his radio antennae. He attempts to repair this item with one from a dead contractor’s radio, only to discern that the sniper had used the earlier response team as a ruse to call for help and lure another response force into his jaws.

Matthews regains consciousness and subtly gets Isaac’s attention that he’s still alive. Matthews slowly crawls towards his rifle in the midst of the dusty wind along with Isaac distracting Juba with small talk. Matthews believes that the sniper is hiding at the top of some rubble nearby and fires in that direction. The dusty wind settles quickly. The sniper sees Matthews and fires, injuring Matthews in the left shoulder as he crawled towards the wall, but a second shot kills him.

Isaac hears the rescue helicopters coming, so he pushes down the wall and uses Matthews’ rifle to try and kill Juba, or at least flush him out so the rescue chopper can see the trap. Juba fires at Isaac twice and misses. Isaac now has the sniper’s location and fires his only round. Isaac stands up and waits for Juba’s next shot, but it never comes. The helicopters land and the rescue team picks up Isaac and Matthews. Once the helicopters dust off, the sniper successfully shoots down both in rapid succession. He is then heard over the radio, calling for another rescue to set a new trap.

Be the first to review “The Wall Dvd” Cancel reply