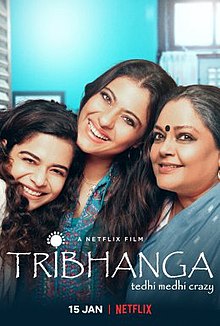 The story revolves around a dysfunctional family of three women and their unconventional life choices. Nayantara, an acclaimed writer, and mother of Anuradha. Anuradha, a Bollywood actor-dancer, is as complex and fierce as her mother and also is a single mother. And Masha (Anuradha’s daughter), is different from the rest of the women in her family. She is a housewife who is pregnant and is willing to compromise on anything to have the “normal” life that she was deprived of.

A brain stroke puts Nayantara in a coma then forces the broken family to reunite and deal with their differences.

Be the first to review “Tribhanga dvd” Cancel reply